With the Mets starting outfield likely set, Matt den Dekker will need to prove in Spring Training that his improved plate discipline in 2014 is sustainable to grab one of the final two backup outfielder spots.

The competition for the fourth and fifth outfielders on the Mets roster this year will feature a number of familiar names including Kirk Nieuwenhuis, Matt den Dekker, Eric Campbell, and the oft-forgotten Cesar Puello. In order to secure a roster spot, den Dekker will need to distance himself from the pack.

One skill set that could help den Dekker distinguish himself is his outstanding defensive play. From 2010 through 2012, Baseball America ranked den Dekker the top defensive outfielder in the Mets' system.  Well known for his all-out play style, den Dekker has made some spectacular plays with both his glove and his arm. However, his aggressive defensive play has also led to injuries which have limited his ability to develop as a player. Defensively speaking, den Dekker would likely be the best candidate should Juan Lagares need time off for any reason. Given the lack of foot speed the Mets will have in right field, it will be important that the backup center fielder be able to cover as much range as possible to mitigate their other defensive shortcomings, which would work in den Dekker's favor.

Offensively, den Dekker has a few flaws which could prove to be his undoing in a positional battle in spring training. Most notably, his plate discipline throughout most of his career has been exceptionally poor. In Triple-A, he never managed a strikeout rate of less than 22.8% prior to 2014, and in his first trip to the majors in 2013, he struck out an alarming 36.5% of the time over 63 plate appearances.

However after an injury shortened 2013 season, it appears den Dekker may have worked out some of his over-aggressive tendencies in 2014. Beginning the season at Triple-A, den Dekker posted the lowest strikeout rate of his minor league career (16.9%), while raising his walk rate to 10.4%, marking the first time he had achieved a double-digit walk rate in his professional career. Over 93 games at Triple-A, he hit a gaudy .334/.407/.540 with 8 home runs, earning him a chance to rejoin the Mets in August, even after another short, unsuccessful stint with the team earlier in the season saw him struggle immensely at the plate, to the tune of .171/.244/.220 over 49 at bats. 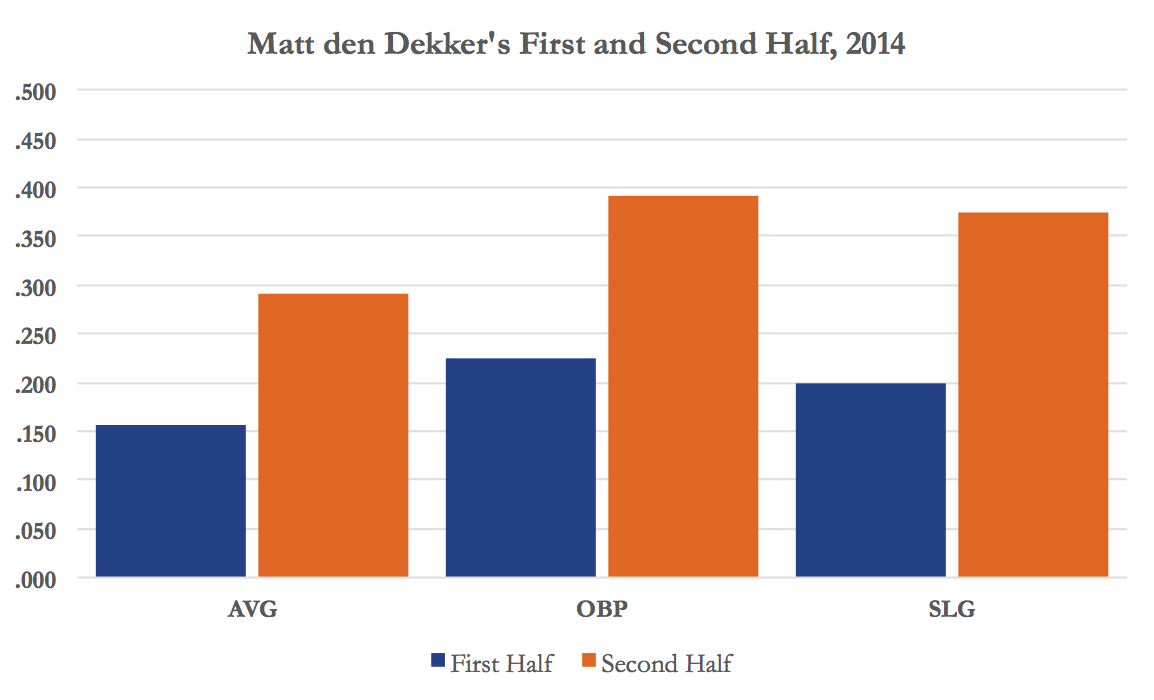 Once called up again late in the season, though, den Dekker did not disappoint. In the second half with the Mets, den Dekker hit .290/.392/.374, good for a wRC+ (weighted runs created plus) of 127, putting him well above average at the plate. His second half slash line was accompanied by a solid 13.6% walk rate and an acceptable 16.8% strikeout rate. While his on-base percentage may have been buoyed slightly by luck, as suggested by a .360 batting average on balls in play, a combination of den Dekker's speed, and a line drive rate of 25% suggest that his OBP could be largely sustainable if he can maintain a respectable walk rate.

Whether or not den Dekker can grab one of the two bench spots that are reported to be available will depend largely on if he can demonstrate that his improvements in plate discipline in 2014 were not simply a fluke. Defensively he would provide the best insurance policy in the event that Juan Lagares was forced to miss time for rest days or injury.  If he can convince the team that he can replicate the high level of play he demonstrated down the stretch last season, the Mets will have to give him serious consideration for a backup outfielder spot when they head into the regular season. And he would have to been convincing enough to overcome the fact that he has an option remaining, while fellow left-handed-hitting outfielder Kirk Nieuwenhuis does not.