The right-handed pitcher is undeniably a student of the game.

Matthew Bowman is 23 years old and spent last year splitting his time as a starting pitcher between the Mets’ Double-A affiliate in Binghamton and Triple-A affiliate in Las Vegas. By all accounts, the year went well. He had a 3.12 ERA in Binghamton in seventeen starts. After his promotion to Vegas, he made seven appearances, all but one as a starter, and posted a 3.47 ERA that was more than respectable given the hitter-friendly nature of the Pacific Coast League and the ballpark in Las Vegas. Those are the basic numbers, of course, and Bowman is familiar with much more than those.

While attending Princeton, Bowman took an in-depth look at the mechanisms of payroll and spending in Major League Baseball.

"Basically I looked into free agency contracts over the past few years. What I had hoped to do was view a team as a stock portfolio, where you have certain assets that perform throughout an entire season—but they don’t necessarily move together—and trying to put together the best portfolio you can to get the best output—which would be runs—the best return on investment," Bowman said.

"Really what it came out to be was looking at how teams were at assessing and predicting WAR, and the price of a single unit—basically, a single win—to each team, and assessing if teams are good at it or not so good at it based on a number of factors—the least of which is not injury, because your asset goes to zero and defaults if your guy gets injured."

A minor league player moving up the ranks since he was drafted in 2012, Bowman still has an appetite for information as he attempts to make it to the big leagues.

"Every pitch you throw, you'd like to say, ‘well, my slider has so-and-so revolutions per second or minute,’ and you want it to be as high as possible."

"At least as a pitcher, and especially as a starting pitcher, preparedness is the name of the game. You want to know everything you can about your opponent before you go up and actually face them. Knowing their stats and knowing their tendencies is very important, at least for me. Whether that’s an actual advantage or a perceived advantage, or whether you actually have visible results based on what you hear, or whether it’s just a confidence in knowing and feeling like you know what to do versus a guy, I couldn’t tell you, but either way, having that information is never going to be detrimental to your game.

"The amount of sabermetric data available for minor leaguers is going to be more limited than you would be able to get in the major leagues, so especially when it comes to scouting the other team, you’re going to have basic statistics—versus right handers, versus left-handers—but you’re really not going to have what they do in certain counts, the heatmaps, things like that. You basically just get a sense of: ‘Do they struggle with this, what can we probably go to?’ And that’s basic scouting."

"But based on what I have and what I’m given, it’s not necessarily an every day, every start type of thing, but they have the pitch tracker going. And that’s important to me because, obviously, every pitch you throw, you'd like to say, ‘well, my slider has so-and-so revolutions per second or minute,’ and you want it to be as high as possible. But what you don't realize is when that starts to slow down later in the game—or maybe later when you're throwing pitches. I throw a split changeup, and sometimes it floats up, sometimes it sinks. Knowing how much break it has and what its tendencies are—knowing what your own limitations are is very important." 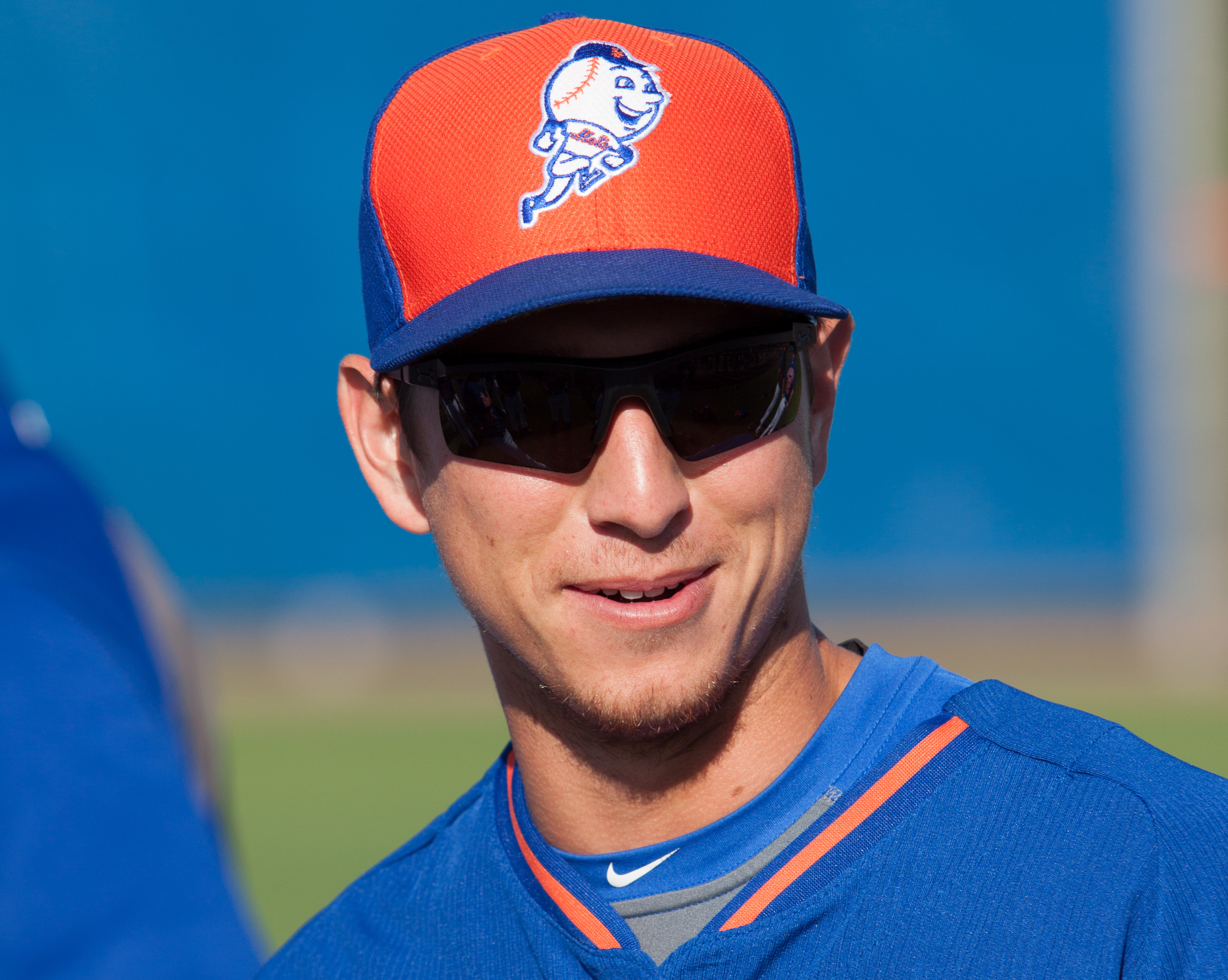 "Certainly the name of the game for the pitch tracker is: You want it down in the zone and you want it to move as much as possible. Knowing the actual numbers of what your absolute best is—that doesn’t help you, but certainly knowing when you start to fatigue and when things don’t work out, and being aware of that, lets you battle a little better, and arming yourself with knowledge of your limitations is always important when you’re on the mound."

In terms of those limitations, Bowman knows that he does not have stuff like Matt Harvey. Currently participating in his first major league spring training camp, he’s been trying to learn from Bartolo Colon and Dillon Gee, pitchers whose stuff more closely approximates his own, as both have found major league success in recent years despite lacking mid-to-high-90s fastballs.

"As a 13th-rounder, in one draft, you don't necessarily think that the numbers are going to work out that you actually make it to the big leagues. But being here and being closer to these guys and seeing what they do with the stuff they have makes me feel a little more confident that it is a possibility."

The numbers seem to have helped along the way, too, even if much of the data he enjoys looking at is separate from his career as a player.

"The line for me between looking at sabermetrics and actually playing is probably a little more defined than you might think, because as much as I’d like to say I can look at these statistics and everything—at least at my own statistics—and pitch to them, if you are good enough to say, ‘I can do this and get a ground ball here and a strikeout here, and less walks’—the name of pitching is pretty simple: you want to strike out guys, you don’t want to walk them, and you want them to put the ball in play. If you’re so good that you just pitch to certain stats, then you can be a dominant pitcher. It’s pretty difficult to look at the sabermetrics. But I enjoy looking at it more from a front office view and thinking about what type of team you’d put on the field, and also it’s helpful, as all sabermetrics are, when looking retrospectively at an outing.

"I remember I had an outing versus New Britain last year where I struck out a good number of people and I felt dominant—it was high strikeouts, low walks, I went deep in the game, but I gave up twelve hits or something crazy. You always struggle with that and you’re like, ‘what happened here? I was so dominant, and yet I gave up about three runs.’

"If you put them in play, you should be getting a certain number of outs."

"Maybe I got out of it with a win, maybe not; I really can't remember. But it’s good to look at it retrospectively, and in the understanding that balls put in play are somewhat arbitrary—in terms of, if you put them in play, you should be getting a certain number of outs. So with a high number of strikeouts and a certain number of balls in play, that game I can sum up as unlucky because some of them were squibbers—okay, that’s unlucky—but also it was a general rate of hits that you get based on balls that get put in play. In that sense you can assess objectively how your outings have been going, but in terms of adjusting your game to what you see, really it’s the pitch tracker that would be the only thing I would look at to try and adjust my game."

If you haven't seen Bowman pitch, you might not expect that he has a delivery that resembles Tim Lincecum’s, though the similarity was more pronounced in the past than it is now.

"In college, it was certainly a little closer, I think, or at least attempting to mimic the delivery—I was a little more conscious of it. But having come to pro ball, if we’re relating it back to statistics, I understand that I’m a guy who’s supposed to get ground balls, and that’s one of my main strengths, especially as a starter, is getting guys to ground out, and getting them to ground out early in the count. It’s hard with his delivery, at least for me, to get the sink on my ball that I want, so I sort of strayed away and I’ve moved to more things that feel and give me the sink on my fastball.

"In college, it was more of an infatuation with the delivery, and he was a small guy doing pretty incredible things at that time. I’m a small guy—I’d love to throw hard, I’d like to be really good. But having come into pro ball, I realize that worked for him—that’s fantastic, but I certainly have a different game than he has. I’m not about to throw 98 on the mound and strike out the world. But I can get guys to ground out and go deeper in games, and that’s sort of what I’ve been trying to play into."

If there’s one thing that definitely will not keep Bowman from making it to the big leagues, it is his baseball intellect. A polished student of the game, he is clearly still trying to learn more as he likely begins the season in Triple-A Las Vegas. And having a sense of what you can and cannot do—and what you can and cannot control—should be as useful in Las Vegas as it can be anywhere in professional baseball.