The first Harvey Day of the season at Citi Field was bittersweet, as the Mets won but saw David Wright pull a hamstring.

The good vibes generated by tonight's weird win against the Phillies were tempered by David Wright's late departure due to injury. It's always fun to beat the Phils, even post-Jimmy Rollins, but the sight of Captain Wright walking gingerly off the field after an awkward slide into second base was disconcerting. 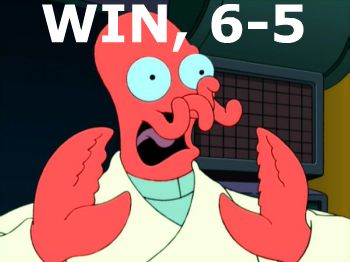 Mets fans who jammed Citi Field tonight to watch Matt Harvey may have been slightly disappointed by the young ace's performance, if only because his spring training and regular season debut set unfairly high expectations. He struck out eight and walked none in his six innings of work, but he also allowed three runs and looked shaky at times. Two of those three runs allowed came via solo home run (to Chase Utley and Cody Asche), which I am happy to blame on a jinx placed by the Mets' official Twitter account:

.@MattHarvey33 has not allowed a home run in 60.1 innings, the longest active streak in the majors. #MetsFacts pic.twitter.com/ZkPoCkZXBr

After the Phillies went up 1-0 on Utley's homer, the Mets tied it up in the bottom of the frame on Michael Cuddyer's RBI single. Our heroes extended their lead to 4-1 on a clutch three-run double by Lucas Duda in the second inning. It was a lead the Mets would never relinquish. Travis d'Arnaud's RBI single in the fifth inning and Daniel Murphy's solo home run in the seventh inning accounted for the rest of the Mets' scoring.

Harvey was also in the middle of perhaps the most entertaining moment of the game. After Phillies starter David Buchanan drilled Cuddyer and Wilmer Flores in the second inning, Harvey pegged Chase Utley in the back with 96 mph heat in the fifth inning in what was almost certainly retaliation. Utley jogged to first base without incident as Harvey watched.

Cuddyer left the game after getting hit on the hand by Buchanan, but X-rays came up negative. Wright wasn't so lucky. He pulled his right hamstring stealing second base in the eighth inning and left the game. It sounds like he is preparing to hit the DL. This led to the short-bench Mets sending backup catcher/beefcake Anthony Recker out to play third base in the ninth inning. Recker saw no action in the frame (praise Dickey), but it was one of several weird moments from tonight's game. Here are some others:

The Mets will try to sweep the Philth on Wednesday at Citi Field. Game time is 7:10 pm and the pitching matchup is Jon Niese vs Jerome Williams. 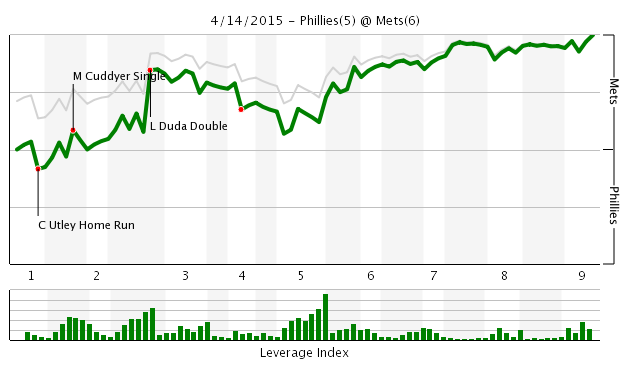