Thor struggled, Heston thrived, and the Mets' offense never made an appearance in 5-0 loss to the Giants.

Going into last night's game against the Giants, the Mets figured to come out strong at the plate. It seemed like everyone on the 25-man roster homered while the team was in Arizona, and Chris Heston, whose ERA had jumped a full point in his last start versus the Pirates, was pitching for San Francisco. 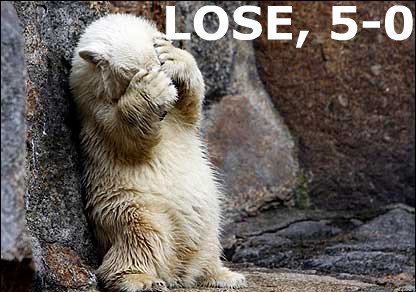 Instead, Heston pitched masterfully, and the Mets could do nothing but stand there and watch him mow them down with ease.

The Giants’ starter never labored versus the Mets offense. True, he did hit Ruben Tejada and Lucas Duda consecutively in the fourth, but in hindsight, one might assume he did it to amuse himself. Michael Cuddyer hit into a double-play one batter later to end the only semblance of threat the Mets had all night. During the preceding three innings, the Mets had looked like fools at the plate, swinging at pitches well out of the strike zone and looking at others well within it—though the strike zone did seem to grow ever larger as the game went on.

However, there was no greater contrast to Heston’s performance than that of Noah Syndergaard. For a man whose nickname is Thor, the young Texan’s outing tonight resembled more of a Herculean labor than a Viking raid for the second consecutive start. The Giants are an incredibly hard team to strike out, and they demonstrated that consistently tonight. The first at-bat of the game almost perfectly summed up how it would all play out for the Mets rookie. Syndergaard had a 1-2 count on Nori Aoki. Then the Giants leadoff man worked it back to a full count before hitting a nubber down the third baseline that Eric Campbell couldn’t make a play on. In other words: the Mets starter expended a ton of effort and had nothing to show for it. Aoki later scored on an Angel Pagan ground out, and though that was all Noah gave up in the first, there was more to come.

To his credit, Syndergaard made it through a jam in the second and pitched a scoreless third to keep the score at 1-0, but in the fourth, the Giants managed to chip away just enough to extend their lead. A couple of soft line drives off the bats of Buster Posey and Brandon Crawford put two men on with two out.  Syndergaard then induced a soft ground ball off the bat of Justin Maxwell. It was so soft, in fact, that Wilmer Flores failed to make a play on it and the bases were now loaded, bringing Heston to the plate.

He drove in two runs on a soft ground ball that snuck into left field to put the Giants up 3-0. Matt Duffy homered in the sixth, but at that point, everyone knew what the real story was, and it wasn’t the Giants' offense or Thor's struggles. As a sidebar: Dillon Gee did give up a homer to the first batter he faced coming out of the bullpen in the seventh. An auspicious beginning to his career as a reliever.

Most no-hitters, including Johan’s, are labor-intensive, ironman-like outings for pitchers.Even as his pitch count began to climb, Heston made throwing a no-hitter look like any old baseball game.

The Mets got their only other shot in the ninth, when Heston hit Anthony Recker with a pitch. But the Giants’ starter immediately regained his poise, and struck out Danny Muno, Curtis Granderson, and Ruben Tejada to end the game and make history. And, devoted as one may be to the Amazins’, one can always appreciate that.