It was a rough night for the usually-dominant starter.

Share All sharing options for: Mets vs. Giants Recap: Offense does well, Harvey struggles in loss

When the Mets score five runs in a game with Matt Harvey on the mound, they’re going to win the grand majority of the time. Last night, however, they did not, and their series against the Giants continued to be a frustrating one to watch. Harvey gave up three home runs, the first of which was a two-run shot hit by Joe Panik, who was the second batter Havey faced. 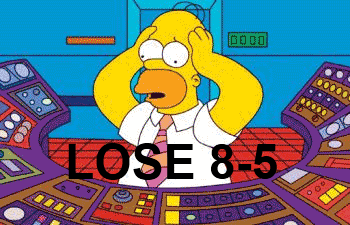 The Mets got those runs back quickly, though, despite Curtis Granderson turning what should have been a leadoff double or triple into a single when he mistakenly thought Angel Pagan had caught the ball—and later in the inning getting thrown out at home plate on a Michael Cuddyer single to left field. But a weak single by Wilmer Flores drove in a couple of runs, and the game was tied. The Mets scored once in the fourth and once more in the fifth, giving them a two-run lead with Harvey looking like he had settled in.

But the top of the sixth was a nightmare of an inning. Harvey gave up a two-run double to Buster Posey, a two-run home run to Brandon belt, and a solo home run to Justin Maxwell. Home runs have been a problem for Harvey this year, particularly lately.

In the eighth, a Juan Lagares triple cut the Giants’ lead to two, but the Mets wouldn’t score again, and the Giants scored their eighth run when Posey doubled in the ninth. That was pretty much it.

With the Yankees’ loss to the Nationals earlier on Tuesday, the Mets dropped to second place, trailing the division leaders by a half-game. Having lost games started by Noah Syndergaard and Harvey thus far in the series, they’ll try to get out of the series with a win with Jon Niese on the mound tonight. 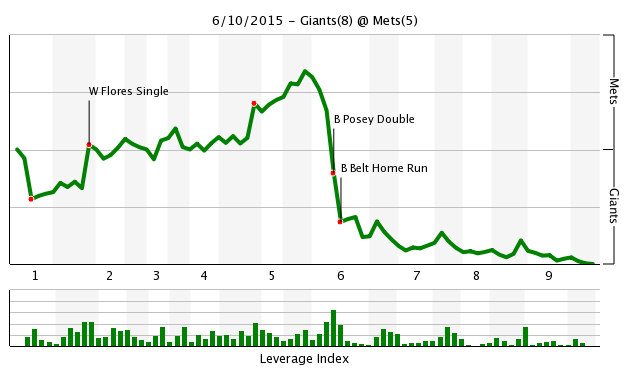