Bartolo Colon was effective in six innings, and Mets hitters had a good night as the team beat the Braves. 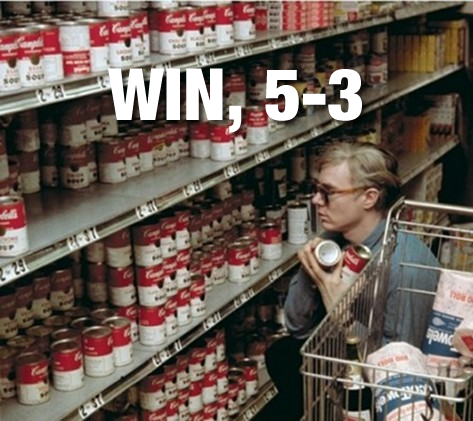 As for the specific Mets game at hand, Bartolo Colon looked just fine until he didn’t. He threw four scoreless innings before getting into big trouble in the fifth. That inning started with three straight Braves singles that loaded the bases. Colon gave up two runs—the first on a fielder’s choice that at least could have been a double play and the second on a hard-hit double—but got out of the inning without allowing anything else. He did so by striking out Cameron Maybin, issuing the most obvious intentional walk in baseball history to Freddie Freeman, and inducing a ground out off the bat of Nick Markakis.

Before all that, the Mets had taken a lead thanks to a solo home run by Wilmer Flores in the second and a two-run home run by John Mayberry Jr.—against the left-handed Alex Wood, of course—in the fourth. Flores scored on that home run, too, after drawing a walk just before Mayberry’s at-bat.

Colon gave up a leadoff double to Juan Uribe in the sixth, but he worked around that without much issue. The Mets widened their lead a bit when a run scored on an Eric Campbell ground out in the sixth, but the game almost went down the tubes in the top of the seventh.

Alex Torres had taken over, and he was not the good Alex Torres. He gave up a single and walked the following two Braves to load the bases with nobody out. But Markakis came up and grounded into a 4-6-3 double play, which scored a run but made ending the inning seem a whole lot less impossible. Terry Collins summoned Carlos Torres, who got Juan Uribe to ground out on a comebacker to end the inning.

Darrell Ceciliani played a large part in getting the Mets some insurance in the bottom of the seventh. He singled to start the inning and one out later stole second base. He tagged up to advance to third on a long fly ball out by Juan Lagares—one of the best balls Lagares has hit recently—and scored easily on a Michael Cuddyer double to put the Mets up 5-3.

Carlos Torres threw a scoreless eighth, and Jeurys Familia—whose paternity leave is imminent—got into a jam of his own in the ninth. He retired the first hitter he faced but gave up a walk, a single, and a walk—well-earned by Freddie Freeman—to load the bases. But for the second time in the game, Markakis grounded into a 4-6-3 double play—this time to end the game. 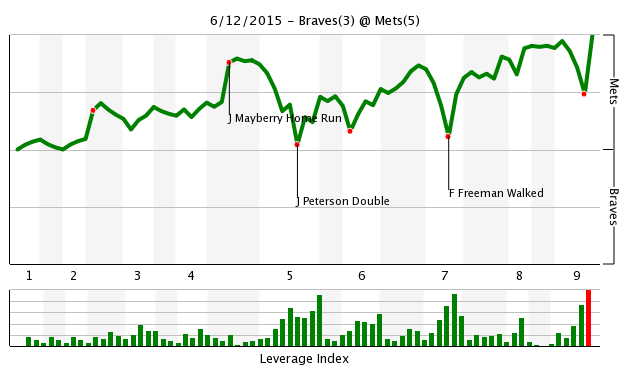