Mets' John Mayberry has struggled as a pinch hitter this year

Baseball's best pinch hitter in 2014 has struggled to replicate that production in 2015.

Share All sharing options for: Mets' John Mayberry has struggled as a pinch hitter this year

Pinch hitting is a difficult way to make a living. As Amazin' Avenue's Aaron Yorke noted over the winter after the Mets signed John Mayberry, "pinch-hitting performance can vary wildly from year to year, even when highly experienced bench bats are involved."

Overall, Mayberry has hit .209/.284/.418 with a 98 wRC+. That OPS, though, has been enhanced significantly in the past week. If you remove Mayberry's 4-for-5 performance at Arizona on June 4 and last Friday's 2-for-2 against Atlanta, he would be hitting just .133/.212/.233. As when trying to analyze an everyday player during the season's first few weeks, one or two good or bad performances can cause the numbers to fluctuate wildly. For example, on Friday against Atlanta, Mayberry raised his OPS by 100 points in just one game.

So, apart from two of the first sixty-two games, just why are Mayberry's number down so substantially a year after he was the game's best pinch hitter? As you will see below, pitchers have not approached Mayberry much differently, nor has his production changed against the three pitches he sees with the greatest frequency:

And while Mayberry's strikeout rate in 2015 (24.3%) has increased only slightly from 2014 (23.4%), his whiff rate on pitches in the bottom half and inside corner of the strike zone has increased dramatically: 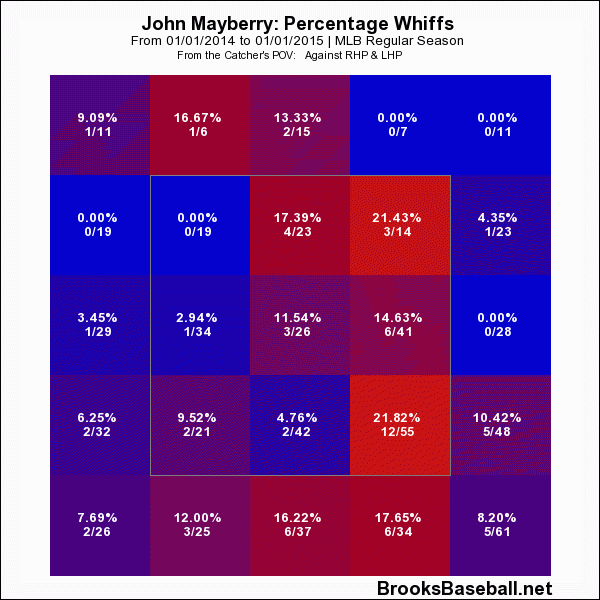 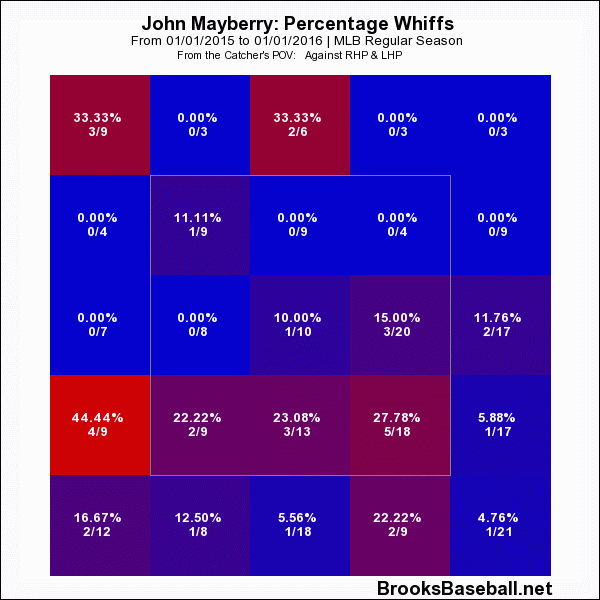 As you can see below, it's on the bottom and inside corner of the strike zone that Mayberry did his most damage in 2014: 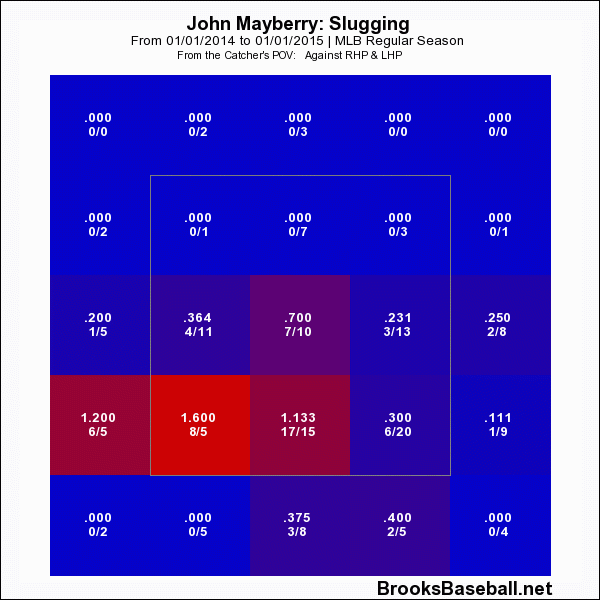 Mayberry did show flashes last weekend in Arizona and Friday night against Atlanta. Perhaps he is heating up, and his BABIP should rise, but the extra-base hits as a pinch hitter have been absent in 2015. Mayberry is whiffing more frequently against pitches he hit for power in 2014, and the power against changeups has disappeared. Before Friday's game, Mayberry had been worth just 0.1 fWAR though more than a third of the season.

Pinch hitting is not easy, but that's primarily what Mayberry is here for and he definitely needs to to a better job than he has so far in 2015.