The Mets got an excellent performance from their starting pitcher and overcame an extra innings deficit to win. 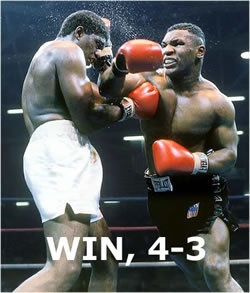 Noah Syndergaard, the 22-year-old pitcher the Mets acquired from the Blue Jays about two-and-a-half years ago, made a lineup that had been on fire coming into the series look like nothing particularly special. Syndergaard struck out eleven, walked two, and gave up just one run in six innings. That run came on a home run by Jose Bautista, an instant no-doubter that landed in the second deck in left field in the first inning.

But that was Syndergaard’s only mistake, really. He got into a little trouble after giving up the home run in the first, but he didn’t allow another run. He got swinging strikes a staggering 23 times out of 109 pitches, a 21.1 percent rate that far exceeds the 2015 major league average of 9.7 percent. He got those whiffs with all of his pitches, with his changeup and curveball were his top two pitches in that regard. His strikeout victims included Edwin Encarnacion, Josh Donaldson, and Jose Reyes.

As for the rest of the game, well, the Mets didn’t have a baserunner against Toronto starter Mark Buerhle through the first four innings of the game. Lucas Duda axed any chance of a perfect game—or a no-hitter—with a leadoff double, but he was stranded at second base in that inning. The Mets finally got on the board in the sixth, though, after Kevin Plawecki reached on a throwing error by Reyes, Syndergaard bunted him to second, and Juan Lagares hit a game-tying double. Ruben Tejada followed that up with a double of his own, and the Mets were in the lead.

The only downside of Snydergaard’s start was that he threw as many pitches as he did in six innings. The first was particularly taxing, as he threw 32 pitches in that inning. He proceeded to throw 13, 17, 17, 13, and 17 pitches in the following five frames. So the Mets went to the bullpen—which has been very good this year—starting in the seventh.

Carlos Torres retired Toronto in order in the seventh, and Jack Leathersich got two outs and perhaps could have gotten all three in the eighth had the Mets been able to turn a double play. But that didn’t happen, and with two out in the inning and Josh Donaldson coming up, Terry Collins brought in Jeurys Familia for a four-out save opportunity. He retired Donaldson but allowed a leadoff home run to Bautista in the ninth and labored through the rest of the inning, though he didn’t allow any more runs.

The Mets didn’t score again for a couple of innings, and Hansel Robles took over for Familia and threw a scoreless tenth. The eleventh wasn’t quite as kind to him, though, as he gave up a run on a walk-single-sacrifice fly sequence after retiring the leadoff man.

It didn’t look all that much like the Mets could come back in the bottom of the eleventh, especially after Lagares led off with a ground out. But a walk by Ruben Tejada and his ability to stop on the basepaths on a Michael Cuddyer ground ball that could have resulted in a game-ending double play kept the team’s slim hopes alive. That’s when Lucas Duda came into play. That guy who praised Duda on Matt Harvey’s man-on-the-street bit must be loving life right now.

Duda dropped a bloop double into left field, and Cuddyer, who was running on the pitch with the count full, ran hard and scored to tie the game. After a Toronto pitching change, Wilmer Flores drilled a single up the middle, and the Mets won. 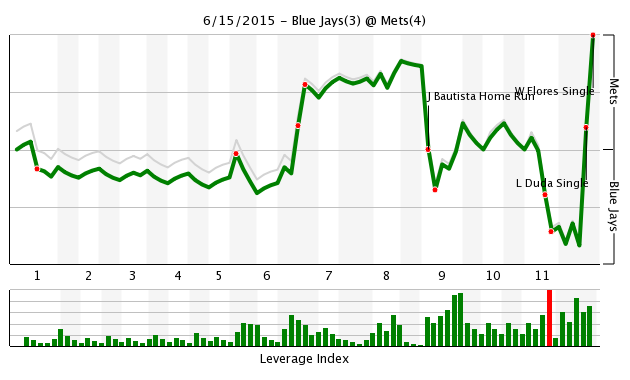