In 2009, the Mets opened up a beautiful new ballpark. Among unique features like the Pepsi Porch, the Jackie Robinson Rotunda, and a pedestrian bridge over the bullpen (later named Shea Bridge), there was the Acheronian abyss known as the outfield. We all recognize that the difference in field dimensions between Shea and Citi were stark. An overlay, originally posted here in 2009, makes the contrast apparent: 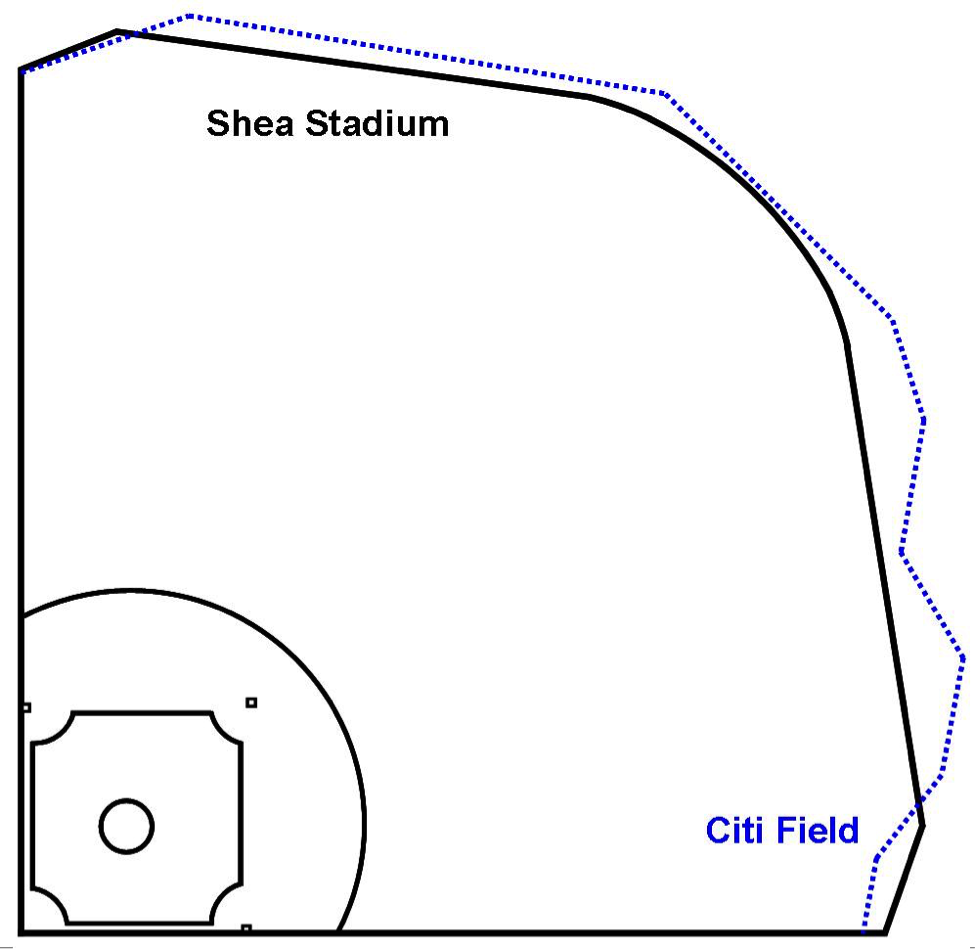 Over the years, the fences at Citi Field have been pushed closer to home plate on a number of occasions. The official Mets site seems a bit confused as to what Citi Field’s real-life dimensions are, as at least two different side-by-side charts exist comparing Shea and Citi, here and here. In any event, the Mets’ site does present a very clear set of dimensions on a separate page, updated to reflect the new 2015 dimensions.

Additionally, Greg Rybarczyk’s Hit Tracker—now known as ESPN’s Home Run Tracker, a collaboration between Rybarczyk and ESPN Stats & Information Group—offers this telling overlay of old Citi and new Citi (2009 walls in black, 2015 walls in red). I will be using this representation throughout this article. 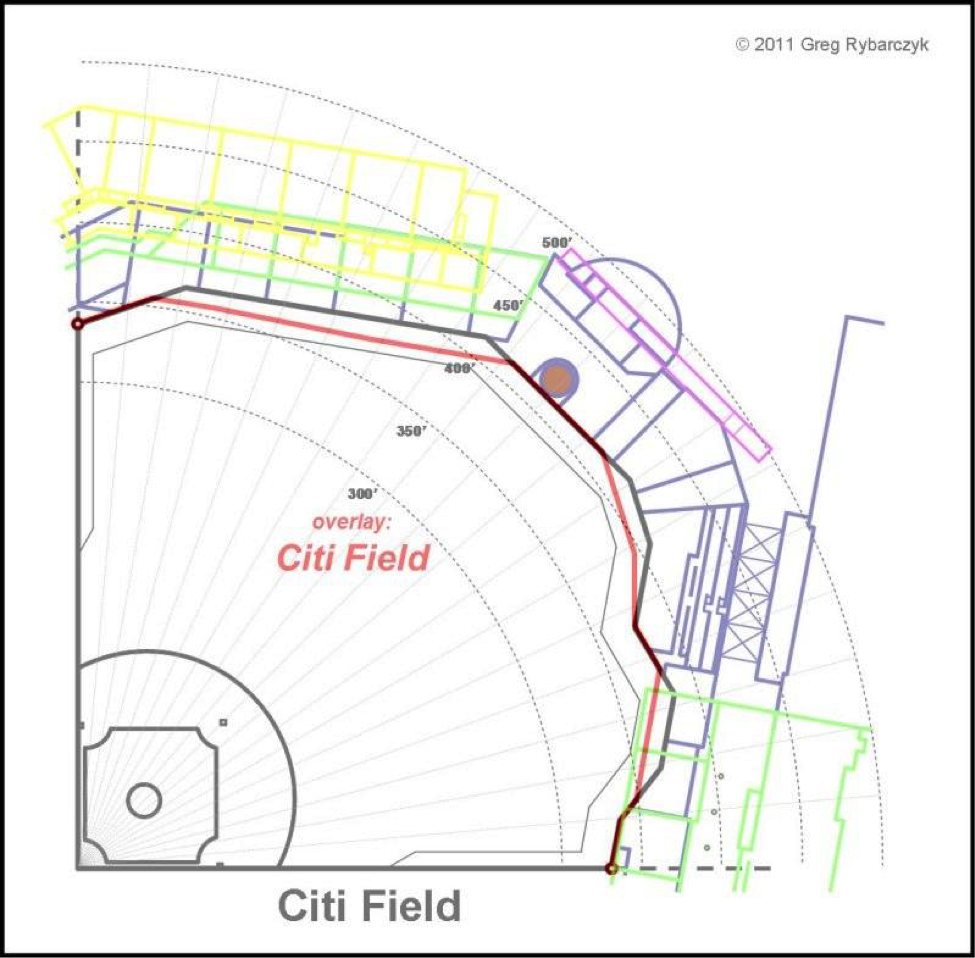 The purpose of this article is to use ESPN’s Home Run Tracker to determine how many Mets home runs hit at Citi Field in 2015 would not have gone over the Citi Field walls of 2009. I will be referring both to video clips as well as spray charts provided on the Home Run Tracker site to track the path of home run balls. While I was unable to efficiently overlay the old dimensions over the current season’s home run charts, the old walls essentially appear as the blue lines that echo this year’s black walls. Technically, these blue lines indicate the stands, but they are a close-enough approximation to the original walls for us to "go to the tape." Being a compulsive Mets fan, I watched every video anyway—but my point is that you, dear reader, can use these blue lines as a guideline of the old 2009 walls. Getting back to my main point, a chart of all home runs hit at Citi Field this season looks like this: 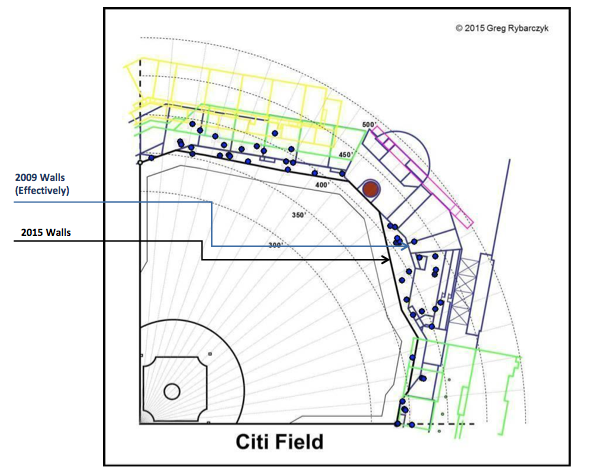 It is immediately apparent that several balls have dropped between the black lines of today’s walls and the blue lines of yesteryear. But this includes all home runs at the park this year. Thankfully, the Home Run Tracker can search for home runs hit only by the Mets, as it is easily searchable and sortable. In addition to info about the home run itself (hitter, pitcher, date, distance, etc.), the database also lists the number of current ballparks in which the hit would have been a home run. This can help put into context the quality of any particular long ball. Here’s the list I’ll be working off of throughout this piece.

Let’s start with a total count of 2015 home-team home runs at Citi. As of June 18, the Mets have hit 33 homers at home, with their opponents hitting the exact same number. Here, we’ll run through each Mets home run that would have been in doubt under Citi Field’s original dimensions.

Not only was this the first home run of the season, but the video reveals it was explicitly described by Gary as a home run that would have stayed within the original Citi Field walls. The chart seems to agree with this conclusion, as the landing spot appears just in front of the blue lines that more or less indicate the 2009 walls. Between the visual aids and Gary’s commentary from the video, we can confidently say the first homer at Citi Field version 2015 would NOT have landed over the fence in 2009.

From the chart of the ball’s flight, it seems Cuddyer’s homer against Scherzer touched down right where the old walls stood, meaning it might have one-hopped the old walls. The video seems to support this idea. Now, while many homers affect a game’s trajectory, this one might have more significance than many. First, it came against Max Scherzer, the ace of the rival Nationals. Second, it broke a nothing-nothing tie. Third, centerfielder Michael Taylor ran out of room, leaving me to wonder if the larger dimensions would have afforded the speedy Taylor both positioning and space to make an on-the-run catch. While the possible alternative outcomes are debatable, there is little argument that Cuddyer’s home run produced the GWRBI.

While the chart alone leaves some doubt as to the ball’s final resting place, a quick video review solidifies my opinion that this would not have gone over the original walls. In fact, the home run was doubted even with the new dimensions, warranting a replay review that ultimately gave Herrera his first (and thus far only) homer of the 2015 season. But, had the original dimensions still been in effect, Dilson’s first homer of 2015 would have simply hit off the Cyclopean walls in left.

I’ve got to be honest: this did not immediately catch my attention, as it looks like a no-doubter on the chart. And yet this towering shot, which would have cleared the walls of 24 MLB parks this year, must indeed be doubted—because, when it comes to the original Citi Field walls, everything must be questioned. Indeed, after watching the associated clip (epitomized by the screen shot below), I incredulously discovered this ball, too, would have fallen short at Citi Field in 2009. 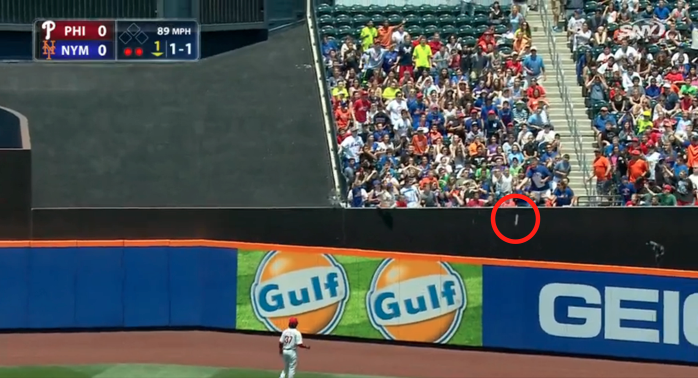 Based on prior charts, I could tell this ball would be a candidate for skepticism. Sure enough, the video justifies that position. Frightfully, it looks like the left fielder had a bead on the ball, getting to the fence before the ball clears it, making me wonder if this would have simply been a long pop fly with the original walls. The loft of this particular hit combined with the fact that this only had enough power to leave Citi Field among all 2015 parks might substantiate my fear. I should also note the final score of this game reveals Mayberry’s two-run dinger as the difference maker.

From my assessment, these five home runs would not have cleared the walls of the original dimensions of Citi Field. Five out of 33 (15%) is a significant portion, even without game context. But I have to admit something: like Inigo Montoya sparring with his left hand, I have left out a key fact. One player for our Metropolitans remains unstudied—a man who has been at the center of doubt throughout the season: Wilmer Flores.

Tied with Jhonny Peralta for the most home runs by a short stop this season, I count five of his eight home runs as doubtful for 2009 Citi Field. This count may at first glance appear to be high. "Five," you might say, "is as many home runs as Lucas Duda had as of May 21." Rather than provide commentary, though, I will let the chart and a timely screen shot of each of Flores’s homers-in-doubt do my work. The results, for the most part, are definitive: 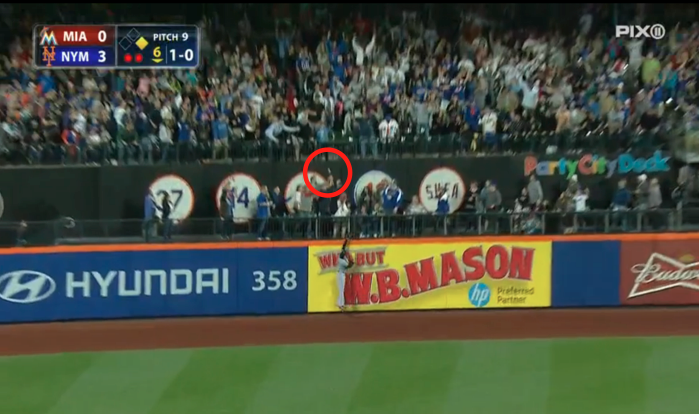 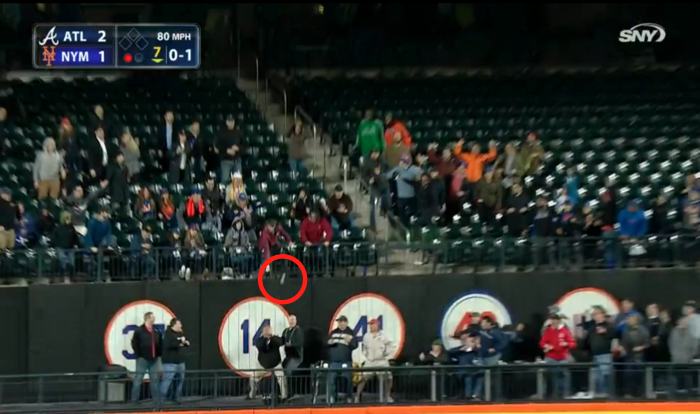 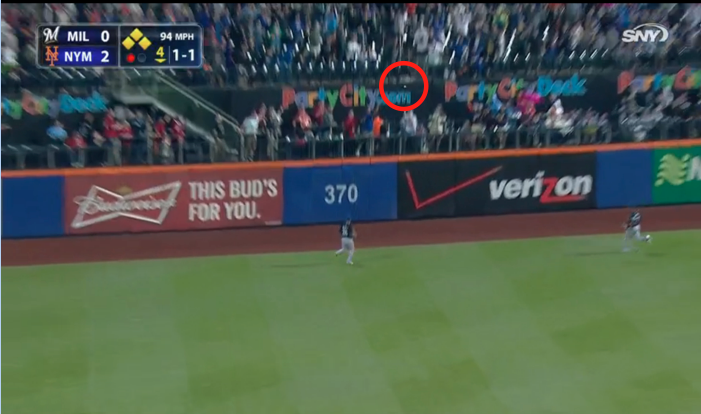 Flores #4. 5/25/15 vs. DeFratus (PHI). This tie-breaking, towering big fly would have made it out of 26 MLB parks (see chart and video). This bomb, I admit, is a close call regarding the old dimensions. I thus provide two screen shots. I get the feeling from the nature of the deflection that the ball hit the metal fence, which would have made it a home run even at Ye Olde Citie Fielde—but it remains possible that it in fact hit off the very top of the ascending wall. 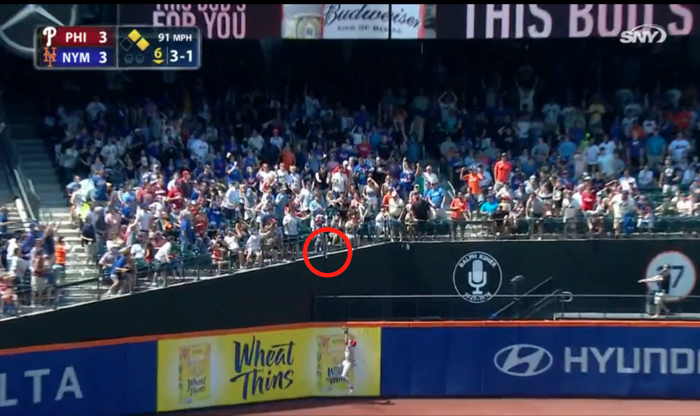 Does it hit the railing or the padded wall? The world may never know. 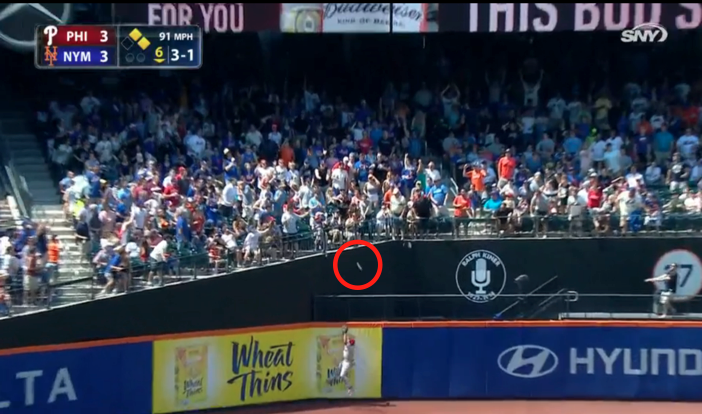 Flores #5. 5/31/15 vs. Phelps (MIA). Finally, we have this Phaeton-like whizzer, which crash-landed between new walls and old. In the screen shot, you can glimpse the ball reaching an eager fan’s hand in the interstitial space now known as the Party City Deck. According to Home Run Tracker, this would have been a home run in 13, or just under half, of MLB parks this season. 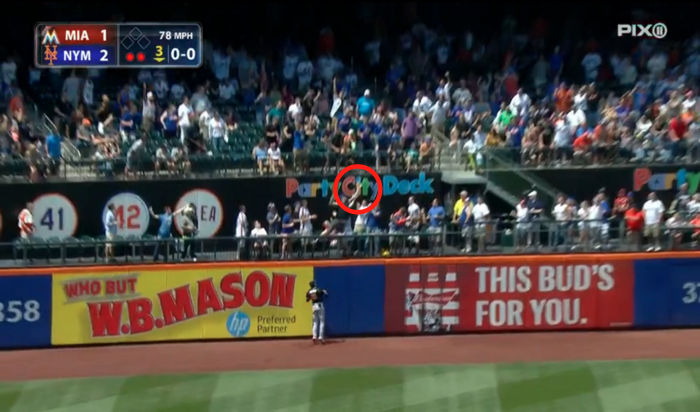 Flores #5. 6/12/15 vs. Wood (ATL). Just a tad more center-ish than the above homer, the video and chart leave little doubt about this hit’s fate in 2009 Citi Field: In play, and quite possibly a harmless out. Being so similar to Mayberry’s pop (#6 above), it is no surprise to find this was only enough to clear these very walls this year.

Even if we exclude the deFratus home run, which I admit is difficult to judge, there are still five Flores home runs that would not have cleared the original Citi Field fences. That accounts for 50% of Flores’s home run production this year! Ignoring so many other factors touched upon by this analysis, I am forced to wonder how much worse off the Mets would be if Flores had not turned on the power? Leaving everything else about this season the same (in particular, Dilson Herrera’s injury, David Wright’s prolonged absence, and most recently Daniel Murphy's visit to the disabled list), the infield to the left of Lucas Duda would be in turmoil, it would seem.

Pressing further, this investigation invites the question: what would have happened to failed players of yore? Would Jason Bay’s career as a Met have been any different? Would Wright’s 2009 season (not to mention each one since) have gone differently?

My aim was not to answer such questions, but rather to prove definitively that the new dimensions are having a very real impact on the outcome of Mets at-bats. If we include all of the home runs presented here, 11 out of 33 home runs hit at Citi Field this year would have stayed in the park as built for the 2009 season. Without knowing if those balls would have dropped for singles, extra bases, or simply been caught for an out, there is little doubt that a 33% reduction in home run power would produce a far different storyline for the 2015 season. A follow-up study might look at opponents’ homers at Citi, with the goal of objectively assessing whether the new walls have thus far been a greater aid to the home team or the visitors.