Mets vs. Brewers Recap—Agony in Milwaukee

The Mets fell to the Brewers again tonight.

Share All sharing options for: Mets vs. Brewers Recap—Agony in Milwaukee

Feelings of hopelessness have come hand-in-hand with following the Mets over this miserable seven-game stretch. After that glorious start, here the Mets were in late June fighting to stay above .500. If you had asked a Mets fan to envision a nightmarish lineup for this 2015 squad, it probably would have looked a lot like tonight’s. Ruben Tejada is still here, and worse yet, he’s needed. Johnny Monell did the catching. Darrell Ceciliani batted fifth. No offense to Darrell, who’s done a relatively fine job, but something is wrong. Something is very, very wrong. It’s infuriating, disappointing, and maddening, and it didn’t get any better this evening.

Fresh off a team meeting that was supposed to get the Mets back on track, one would think Bartolo would come out on the mound tonight looking for both his tenth win and some redemption, as his last outing started this week-long bloodbath. Nope. Instead, Bartolo came out and threw some flat-as-a-pancake fastballs to the heart of the Brewers’ order. Gerardo Parra led off the game with a double, Jonathan Lucroy singled, Ryan Braun drove in Parra with another single, and then Adam Lind drove in Lucroy with a double. The Brewers were up 2-0 and had men on second and third with no outs. And it had only taken them ten pitches to do it. It was terrible.

To his credit, Bartolo got it together, set down Carlos Gomez, and escaped the first with his team only down by the two runs. He cruised through the second, third, and fourth innings. He even had two outs in the fifth before getting Ryan Braun to hit a grounder to Lucas Duda over at first, which should’ve ended the inning. However, Bartolo failed to get to first fast enough and/or failed to make a decision as to whether to tag Braun or the base, and thus allowed the Brewers’ right fielder to reach first safely. Naturally, because the fates just hate the Mets right now, the miscue proved costly. Colon then gave up two singles, the latter of which came off the bat of Gomez and drove in Braun to make the score 3-1. To top it all off, in the next inning, Scooter Gennett placed an 0-2 pitch from Colon over the right field wall to add another run to the Brewers' tally.

Time for a quick reality check: three runs is not an insurmountable lead. Teams come back from three-run deficits all the time. It happens, I swear. Three runs should not represent a death kneel that damns a team to a loss. But for these Mets, that’s exactly what it has been and what it was again tonight.

The Mets offense tonight began when Johnny Monell hit a single in the third that prevented the Amazins from being no-hit. Curtis Granderson then hit his obligatory solo home run to put the Mets on the board in the fourth. That was all they could manage against Jimmy Nelson, who became yet another on the growing list of pitchers whose stats have been inflated by Mets ineptitude.

In the ninth, Ruben Tejada doubled off of K-Rod to provide the Amazins with a glimmer of hope. He advanced no further though, as Lucas Duda struck out, and the Mets fell below .500 for the first time since April. 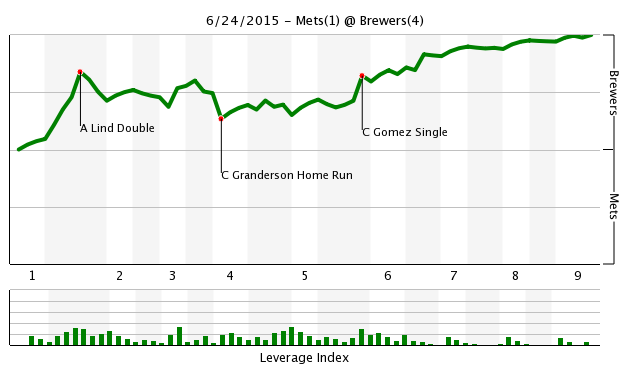