Mets vs. Diamondbacks Recap: Anything you can do, Harvey does better

Share All sharing options for: Mets vs. Diamondbacks Recap: Anything you can do, Harvey does better

After an unusually poor outing last Saturday against the Dodgers, Matt Harvey bounced back against the Diamondbacks, throwing seven innings of two-run ball and striking out nine. He also delivered the tying and go-ahead runs, as his two run home run in the fifth turned a 2-1 Mets deficit into a 3-2 lead. 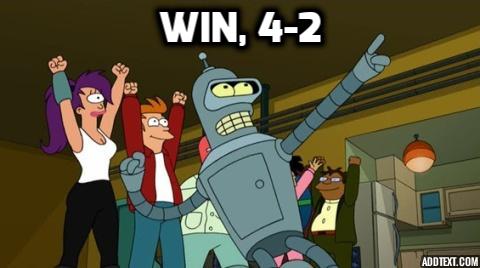 Despite not having the consistently elite control he had prior to Tommy John surgery, Harvey has still been extremely effective this season. He's accrued 1.8 fWAR (FIP based) and 2.1 RA9-WAR (ERA based) with a strikeout rate of nearly a batter an inning coming into today's action. Such a high level of performance is extremely impressive in the first half season back from Tommy John, and things should just get better as Harvey regains his pinpoint accuracy.

But even with the nine strikeouts and the domination of one of the best bats in the league (Paul Goldschmidt), Harvey's pitching wasn't close to the most exciting part of his game today. In the fifth inning, down by a run and with Diamondbacks starter Patrick Corbin largely cruising, Matt Harvey lined a ball just over the orange line in left-center for his first career home run. While it wasn't quite the moon shot Noah Syndergaard hit earlier this year, the ball left Harvey's bat at 101 MPH and traveled 380 feet - in other words, no cheap shot. Having pitchers that can actually hit is a very pleasant change. Met pitchers currently have a 6 wRC+, a big upgrade over the -19 and -36 marks posted in 2013 and 2014 respectively. Perhaps the biggest question is who homers next. My money is on Jacob deGrom.

As for the rest of the offense, perhaps there are some signs of life. Lucas Duda homered for the second straight game, this time off a lefty. His fifth inning, opposite field bomb (three batters ahead of Harvey's) was Corbin's first real mistake of the game and only the second Met hit. Duda's slump has been a big culprit in the Mets recent offensive ineptitude, but a hot streak could push the Mets offense a lot closer to average. Ruben Tejada was also a big contributor, making a nice play up the middle to get Harvey out of a jam in the second and hitting a home run of his own in the sixth.

Harvey handed the game off to Bobby Parnell in the eight inning, who continued to impress in his return to the mound. After walking David Perlata to lead off the inning, Parnell induced a double play ground ball from Paul Goldschmidt to erase the Diamondback scoring threat, a +11.4% WPA play (third best in the game behind Harvey and Duda's home runs). Parnell then got Yasmany Tomas to ground out to end the inning.

Jeurys Familia came in for the save, and as he's done 25 times before, slammed the door shut. He induced ground balls from Jake Lamb and Wellington Castillo before striking out Jarrod Saltalamacchia to end the game. That Familia isn't in the All Star Game is unfortunate, but perhaps a blessing in disguise - he's has already pitched 41.1 innings this season, and a brief rest is probably a good thing.

With the win and the Cubs loss to Chris Sale and the White Sox, the Mets are only one game out of a Wild Card spot. They are also one-and-a-half games behind the Nationals in the NL East prior to the Nats-Orioles game later tonight.