Mets vs. Diamondbacks Recap: Kirk Nieuwenhuis goes where no Met has gone before

Captain Kirk homers his way into Mets record books as the Mets sweep the Diamondbacks.

Share All sharing options for: Mets vs. Diamondbacks Recap: Kirk Nieuwenhuis goes where no Met has gone before

Kirk Nieuwenhuis just became the first Met to ever hit three home runs in a single game at home. He led the Mets to a 5-3 win and a series sweep over Arizona, sending the Mets into the break with a four-game winning streak, seven wins in their last nine games, and with a mere one-game deficit in the Wild Card standings.

The Mets have had ten players hit three home runs in a single game in their history. Ike Davis hit three in Arizona, Carlos Beltran had three in Colorado, and Jose Reyes hit three in Philadelphia all in the past decade. All-time great Mets Gary Carter and Darryl Strawberry accomplished the feat in San Diego and Chicago respectively. Jim Hickman was the fist Met to do it back in 1963 in St. Louis. If you've consistently listened to Gary Cohen's great work calling Mets games, you know no Met had ever hit three home runs at home.

Many have come close. Lucas Duda has hit two home runs in a game at home six times. David Wright has done it twelve times. Strawberry had eleven home games with multiple home runs. Plenty of mediocre players, such as Jeff Francouer, Ty Wigginton, Xavier Nady, and even Jason Bay have had two home runs in a home game. None had ever gotten over the hump.

Kirk Nieuwenhuis had a -30 wRC+ when he was designated for assignment on May 18. He had struck out in 42.5% of his at bats, and had a paltry .079 average with a .120 wOBA. The Mets sold him to the Angels, and he wasn't much better. In 24 plate appearances with L.A., Nieuwenhuis had a 25 wRC+ with a .199 wOBA. When the Angels DFA'd him, the Mets claimed him, and activated him last Monday. Coming into tonight, he had a 9 wRC+ on the season. 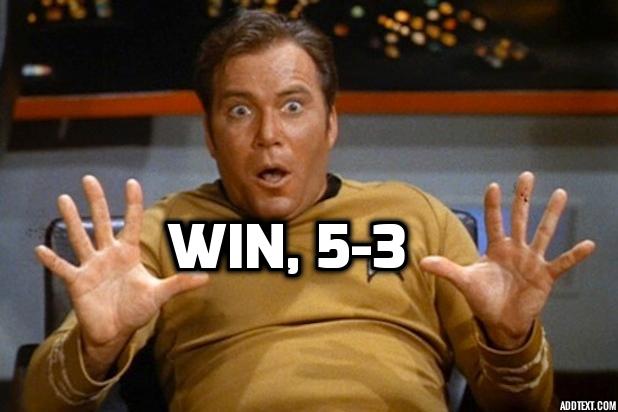 Kirk's first home run came in the bottom of the second. Arizona starter Rubby de la Rosa left a fastball up and over the outside part of the plate, and Nieuwenhuis drove it down the left field line and just over the orange line atop the outfield wall. A brief umpire review quickly confirmed his first home run of the year, which gave the Mets a one run lead.

The next inning, Jon Niese allowed the Diamondbacks to tie the game with a Chris Owing double, a bunt, and a ground out by Nick Ahmed. Daniel Murphy quickly put the Mets back in the lead with his fifth home run of the year in the bottom half of the frame, and after a Wilmer Flores fly out and a walk to Lucas Duda, Nieuwenhuis came to bat. Once again, de la Rosa left a pitch up and over the plate, and Kirk crushed it for a towering home run to left center field.

Niese again let the Diamondbacks inch closer when Paul Goldschmidt finally broke out with a home run (he finished the series 1-for-12), but the Mets still held a 4-2 lead in the bottom of the fifth when Nieuwenhuis came to the plate for the third time leading off the inning. Keith Hernandez very quickly brought up the fact that no Met had ever hit three home runs at home, and he and Gary Cohen discussed this for the first five pitches of Kirk's at-bat. On cue, Diamondbacks reliever Randall Delgado left a changeup right in Nieuwenhuis's wheelhouse, and he launched it down the fight field line. The ball hooked hard, but hit the netting on the foul pole, securing his place in Mets history.

At this point, the Mets had hit four home runs. However, three of the Mets' round-trippers were solo shots, and the other was a two-run blast. As such, the game was very much within reach for the National League's best offense. A Yasmany Tomas double and David Peralta single drove in the third Diamondbacks run and forced Niese out of the game with two outs in the seventh. Jenrry Mejia came on to make his season debut, retiring the only batter he faced to hold the lead.

Bobby Parnell came on in the eight and retired the side in order, helping himself with a grab on a line drive back up the middle and getting a fine play from Lucas Duda on a foul popup from Goldschmidt. Jeurys Familia then came on to pitch the ninth, and worked around a walk to secure the win. It was Familia's 27th save of the year.

The Mets sweep Arizona, scoring 13 runs all on home runs—the first time a team has swept a three-game series in which all their runs were scored by the home run ball since the 1960 Orioles. The Mets enter the break on a high note at 47-42 and in the thick of the playoff hunt.