The Mets' offense has not been good this year.

Share All sharing options for: Mets Midseason Review: What lineup?

While the Mets' pitching staff has been a strength this year, the team's lineup has not. That's understating things, really, especially over the past few weeks. In totals, the Mets have scored just 310 runs. That's 3.48 runs per game, which ranks 28th out of thirty among Major League Baseball teams. In total, they have hit .233/.298/.363. Their .660 OPS ranks 29th in baseball, and while Citi Field isn't a launching pad, it's a fairly neutral park now that the fences have been tweaked a few times.

That the team has struggled to score runs makes sense on the surface. David Wright and Travis d'Arnaud have combined to play just 27 games this year. Both players hit well when they were on the field, though only d'Arnaud seems relatively close to getting back on it.

In their absence, nearly everyone has struggled. Among the regulars, only three hitters have been above league average by wRC+ this year: Lucas Duda, Curtis Granderson, and Daniel Murphy. That those three are hitting fairly well doesn't come as a big surprise, considering their track records over the past few years.

But Michael Cuddyer, who the Mets signed for two years last winter, had at least a good a track record as a hitter, when healthy, over the past few years before this one, and he has hit just .244/.294/.367 on the season. He really struggled for about a month beginning in the game in which the Mets were no-hit. From June 9 through July 5, Cuddyer had a .368 OPS. With a little bit of rest in between appearances coming into the All-Star break because of an ailing knee, Cuddyer came back to life a bit in the last three games before the break, going 5-for-12 with a home run in total.

Mets left fielders have hit a combined .246/.302/.425 for the season, thanks in part to the fact that Kirk Nieuwenhuis played left during his three-home-run game on Sunday. Even Cuddyer's .661 OPS represents an upgrade over what Mets left fielders hit last year: .219/.306/.309. But the team needs more out of him and the position in general than it has gotten thus far. 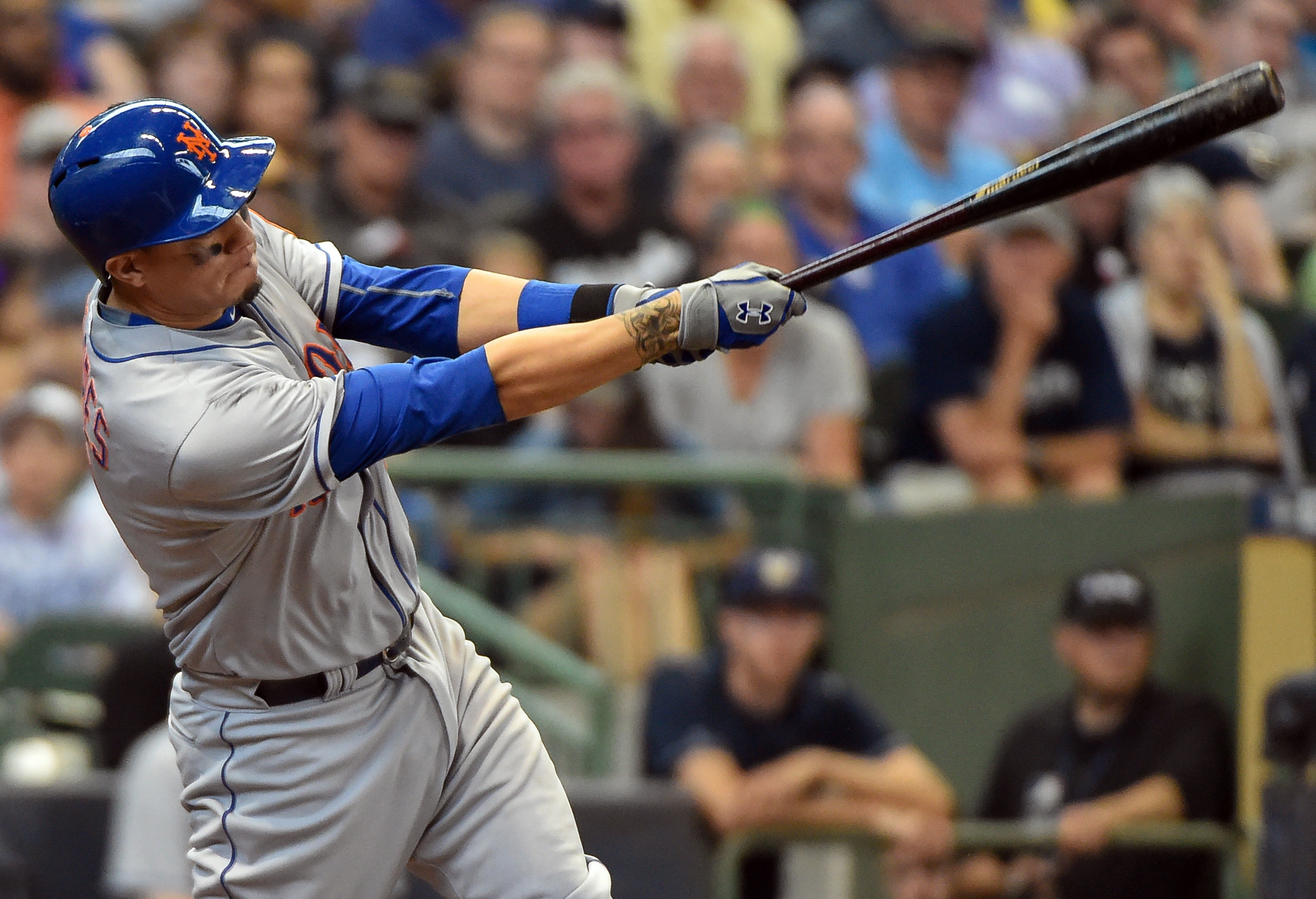 Mets pitchers have gone from some one of the worst-hitting bunch last year to one of the best, but no other position player on the team has been a league average hitter. Wilmer Flores has come the closest thanks to the ten home runs he's hit, but he has just a .286 on-base percentage. Now playing second base after the Mets started him at short for most of the season, Flores's defense was never supposed to be great, but he would have to hit quite a bit more to justify playing him at short. And even at second base, his production as a hitter would be below average for the position.

From there, the rest of the Mets' leaderboard doesn't get any better. Ruben Tejada has hit like Ruben Tejada. Juan Lagares hasn't lived up to the offense he produced last year, and his achy arm has limited his defensive value a bit, too. Dilson Herrera was as hot a hitter as anyone to begin the year in Las Vegas but struggled in 93 plate appearances in the big leagues before the Mets optioned him back to Vegas to work on things.

John Mayberry hasn't been very good overall, though he has predictably been much better against left-handed pitching than right-handed pitching. It's virtually impossible to play a player in a strict platoon, especially when a team plays with a four-man bench for much of the season, but Mayberry's plate appearances against righties should probably be limited as much as possible.

The list goes on. Eric Campbell, Kevin Plawecki, Darrell Ceciliani, Anthony Recker, Johnny Monell, and Danny Muno have struggled, too. By wRC+, Noah Syndergaard has been a better hitter than those six position players. Hell, the team's leader in wRC+ this year is Steven Matz at 235, though he has only made six plate appearances, which makes the comparison at least a little unfair.

Looking ahead, d'Arnaud should return in the relatively near future. Wright hasn't escalated his rehab to the point of playing baseball yet, which isn't encouraging. There have been some signs of hope sprinkled throughout the lineup, most notably with Plawecki, who has been a much better hitter over the past few weeks than he was earlier in the season.

Of course, the Mets could improve their lineup via trade over the next couple of weeks. If the team isn't willing to part with any of its most-prized pitchers, even acquiring a couple of decent major league hitters could help elevate the offense from bottom of the barrel to middle of the pack. When the Mets have scored four runs—almost exactly the National League average, which is 3.98—they have been wildly successful. The problem is that their offense has been closer to the cellar-dwelling Phillies' 3.38 runs scored per game than it is to that National League average.