Mets vs. Cardinals Recap: Eighteen innings of mostly excellent pitching works out for the Mets

The Mets needed eighteen innings to do it, but they beat the Cardinals on Sunday.

Share All sharing options for: Mets vs. Cardinals Recap: Eighteen innings of mostly excellent pitching works out for the Mets

It took nearly six hours, but the Mets beat the Cardinals on Sunday, avoiding a sweep and pulling within two games of the division-leading Washington Nationals in the process. To say that the team had a frustrating day at the plate would be quite an understatement, but in the end, they scored three runs and held the Cardinals to just one. 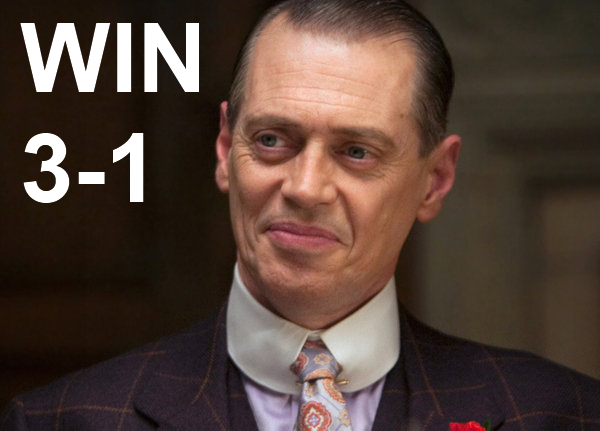 For most of the game, it seemed like neither team was going to score. And neither team did until the thirteenth inning. But while the Cardinals rarely even got a runner past first base over that span, the Mets often had runners on base, even in scoring position. They just repeatedly failed to score.

Even once they scored the game’s first run in the thirteenth after Curtis Granderson hustled out a double and came around to score when Kevin Plawecki singles, the Mets had runners on the corners soon thereafter with nobody out. They couldn’t score then, which gave Jeurys Familia just a one-run lead in the bottom of the thirteenth.

As great as Familia has been all season, that he gave up a leadoff home run to Kolten Wong in that inning was not even a little bit surprising. He got into some more trouble in that inning, too, but managed to escape it. And after that, the Cardinals threatened multiple times, but Mets relief pitchers always found a way out of things, thanks in part to Yadier Molina’s tendency to hit into ground ball double plays.

On the bright side, Mets pitchers were outstanding once again. Jon Niese went seven-and-two-thirds innings without allowing a run. The rest of the bullpen—Bobby Parnell, Jenrry Mejia, Hansel Robles, Familia, Sean Gilmartin, and Carlos Torres—gave up just the one run in ten-and-one-third innings. In total, Mets pitchers struck out fifteen and walked five. Gilmartin even collected his first major league hit to lead off the sixteenth inning.

The game also included an intentional walk by the Cardinals that put the go-ahead run on second base just to get to Mets pinch hitter Jacob deGrom in the seventeenth and then unintentionally walked deGrom to load the bases. But the Mets didn’t score in either of those wacky circumstances, either.

In the eighteenth, though, they finally broke through again. Wilmer Flores and Curtis Granderson singled. Kevin Plawecki put down a sacrifice bunt, but Cardinals starting pitcher Carlos Martinez, who had been in the game in relief for a while, botched the play and allowed him to reach safely. That up the pair of runs that ultimately decided the game. Ruben Tejada hit a sacrifice fly, and Eric Campbell executed a squeeze to put the Mets up by two runs.

And Carlos Torres retired the Cardinals in order in the bottom of the eighteenth. 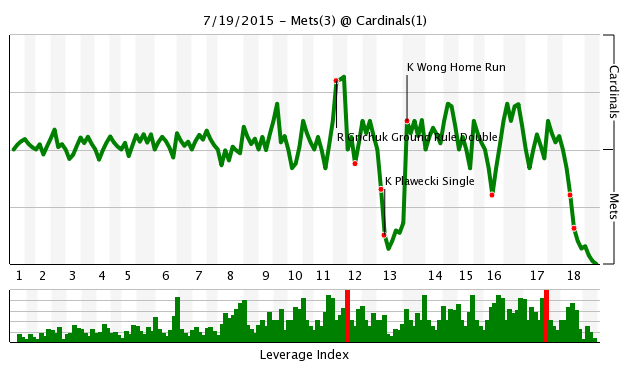