deGrom has been dominant this year. Let's take a look at some of his best starts.

Share All sharing options for: Jacob deGrom's best first half starts in review

During the All-Star Game on last week, baseball lovers everywhere discovered what the National League has known for one-and-a-half seasons: Jacob deGrom is really good.

But when you break down and analyze each deGrom start, you get an even more immediate understanding of  just how completely and thoroughly he can shut down an opposing offense, to the point they never really mount a threat in seven or eight innings. To demonstrate his mastery on a game-by-game basis, here are his top five starts of the first half by game score

This early season matchup in Queens was deGrom's third start of 2015. He got the better of Giancarlo Stanton with a couple of strikeouts and no hits allowed. For deGrom, though, the game was about throwing fastballs past Christian Yelich on the few occasions the Marlins put in runners in scoring position.

After Dee Gordon led off the game with a bunt single, the only inning in which the Marlins would put aboard the lead runner, deGrom went after Yelich with a barrage of sinkers. Last year, Yelich slugged just .372 against sinkers from right-handed pitchers. After running the count full on five straight sinkers low and away, deGrom climbed the ladder with a 95.4 mile per hour four-seam fastball for strike three. 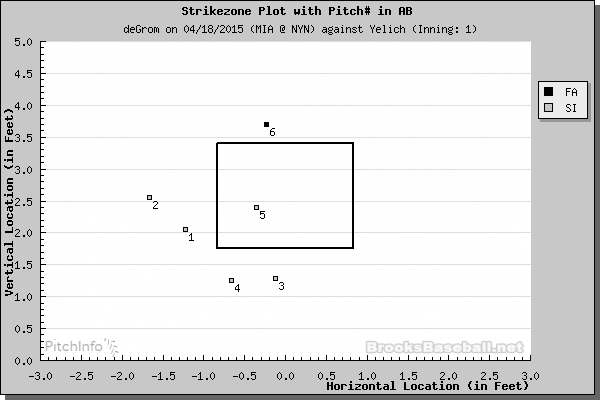 Yelich would come to bat again in the third inning, this time with two outs and runners on the corners. deGrom and Travis d'Arnaud were paying attention during Yelich's first at-bat, and with the count 2-and-2, deGrom would again climb the ladder, this time with a 95.7 miler per hour four-seam fastball. 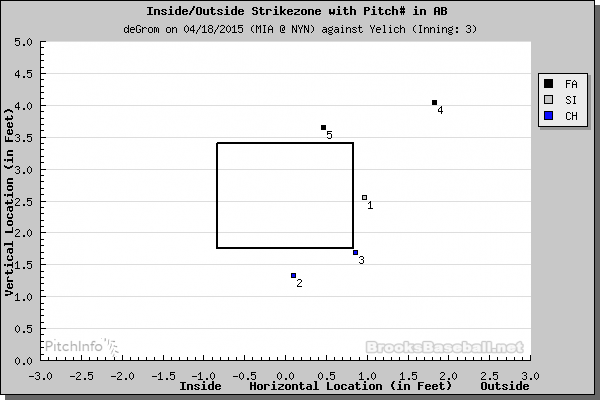 For the second time in three innings, Yelich could not lay off, whiffing to end the inning. In two at-bats, deGrom threw Yelich six sinkers on eleven pitches. For the game, deGrom matched a season high with 28 sinkers. He has gone to the sinker 12.91% of the time this year after going to it 17% of the time last year. While deGrom has increased his velocity by one mile per hour from last season, it has been his least effective pitch so far, with opponents slugging .421 with two home runs against it. On this night, though, he used it to shut down Yelich and the Marlins.

Just two Brewers players reached second base against deGrom on this early summer night. Neither advanced any further. deGrom set a season high in strike percentage at 77.0%. He had zero three-ball counts and just seven two-ball counts. deGrom was aided by a Brewers offense that swings at more pitches (49.9%) than any other team in the National League but has just the tenth highest batting average at .250. Milwaukee also entered the break in the bottom four in the NL in both walk rate (6.4%) and on-base percentage (.302).

deGrom was dealing at Miller Park. His four-seam fastball hit 98 miles per hour, and he induced eleven whiffs with that pitch alone. deGrom and Kevin Plawecki were not messing around with Brewers hitters, daring them to swing at fastballs over the plate and up in the zone, as you can see below: 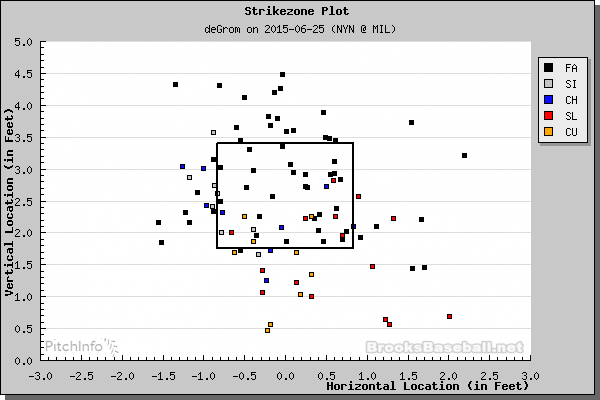 The free-swinging Brewers hitters seemed more than willing to comply with deGrom's and Plawecki's game plan. Of the 37 four-seam fastballs deGrom threw from the middle of the strike zone and up, including more than a dozen out of the zone, 31 went for called strikes, whiffs, foul balls, or outs. Not a single one was put into play for a hit. Six of deGrom's seven strikeouts came on the four-seamer, including two of Ryan Braun, who has .296/.367/.546 against four-seam fastballs from right-handed pitchers in 2015. He was no match for deGrom's most deGrominating pitch (hey, you've all gotten to make joke).

In 2015, not surprisingly, deGrom's four-seam fastball has been best  and most frequently thrown pitch, against both right-handers and left-handers:

After dominating the Philadelphia Phillies but receiving a no-decision on May 26, deGrom got back in the win column in Southern California. True, the 2015 San Diego Padres rank among the bottom three in the NL in team batting average (.238), OPS (.662), and contract rate (77.0%), and neither Derrik Norris or Wil Myers were in the starting lineup. It was clear from the game's outset, though, that it would not matter who the Padres sent to the plate.

deGrom stuckout the first four Padres he faced, including Justin Upton, who entered the game with a .900 OPS. deGrom stayed away from Upton, getting ahead 1-and-2 with two sliders and a four-seamer. On June 1, Upton was hitting four-seam fastballs from right-handed pitchers at .322/.403/.593. Unfazed that production, deGrom unleashed a 98.1 MPH four-seamer up and away from Upton: 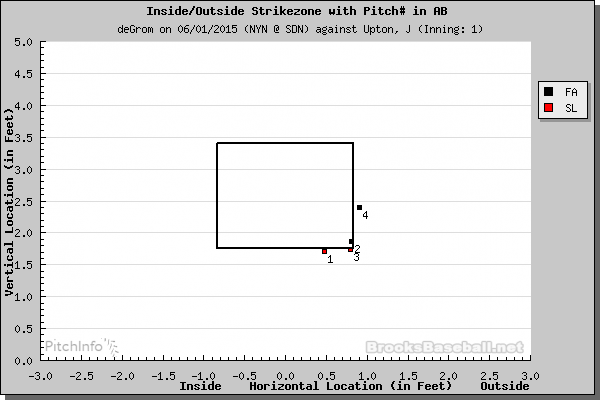 Upton could not catch up, and deGrom was off and running, facing just one batter over the minimum in eight innings. deGrom stayed strong as the game progressed, needing just fifteen pitches to get through the sixth and seventh innings.

deGrom went to his slider 21 pitches (20.2%), holding the Padres hitless. So far this season, he has gone to it 18.81% of all pitches, a two percent increase from 2014. It is the pitch he has thrown with the second greatest frequency, and opposing batters are slugging .224 with no extra-base hits.

In his final start before the All-Star break, deGrom threw 63 four-seam fastballs, a new season high. Not a single Giants batter reached third base, with deGrom retiring the final thirteen Giants batters he faced.

This start stands out, because for the first time in his career, deGrom did not throw one sinker. It was more than likely a concerted effort on the part of deGrom and Plawecki. Entering the game, the Giants five best hitters by OPS (excluding Buster Posey, who had the day off) had been outstanding against sinkers from right-handed pitchers in 2015:

The strategy, intended or not, worked.The Giants five best hitters entering the game went a combined 1-for-15 with a walk and five strikeouts.

deGrom's dominant start gave the Mets a series win in San Francisco, and a winning record on their West Coast trip.

deGrom's start against the St. Louis Cardinals on May 21 was the fourth best start of the first half by a NL pitcher, according to Game Score. And you know what? When you look at the numbers, even that seems too low.

We could spend a few thousand words breaking down deGrom's masterpiece, digging deep on key at-bats, fastball dominance, and his retiring the final 23 Cardinals hitters he faced. Like deGrom's first half overall, there are too many incredible numbers to dissect in one article. Instead, we will just focus on a few of the most impressive feats.

deGrom got ahead of a season-high 80% of hitters, throwing first pitch strikes to 20 of 25 batters. He also set a season high for both total strikes (79) and strikeouts (11). Right-handed batters went 0-for-12, while left-handed batters had seven strikeouts. And deGrom just got more efficient as the game progressed:

deGrom also went to his curveball a season-high 21 times. In 2015, he has gone to his curve just 8.55% of all pitches, but has held opposing to just a .333 slugging percentage. Against the Cardinals, deGrom recorded two strikeouts with his curve, using his outstanding fastballs to set-up the breaking pitch. In the third inning, deGrom jammed Kolten Wong with a 96 MPH sinker that he fouled off. Ahead 0-and-2, deGrom unleashed a curve at Wong's ankles that him whiffing for strike three. 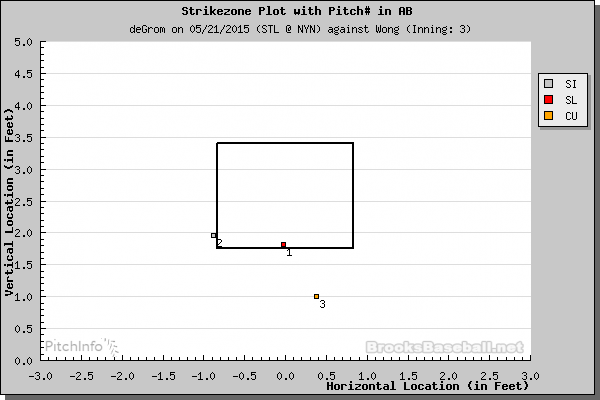 This season, Wong has hit .438/.500/.688 against curveballs from right-handed pitchers, but deGrom did a masterful job of setting up for the pitch.

On the night, the Cardinals did advance a single runner past first base. deGrom needed just five pitches to set down Randall Grichuk, Jason Heyward, and Mark Reynolds in eighth. It might have been the end of his night, but deGrom still hit 95.6 MPH in the inning. The Mets 5-0 victory moved the team back within a half game of the Nationals.

Jacob deGrom's first half was extraordinary. While these were his five best performances, there were a half dozen more on which we could have delved deeper. His brilliance thus far cannot be contained in a single article. I mean, we have not even touched on his change-up (28% strikeout rate, no extra-base hits). deGrom gets the ball Tuesday at Washington, and this list could soon have a new entree.