Late-game bullpen woes cost the Mets a chance to pull within one game of the division lead.

Share All sharing options for: Mets vs. Nationals Recap: Another Washington comeback

In perhaps the most critical moment in the Met season, Bobby Parnell had his first major hiccup, giving up three runs to the Nationals and paving the way to yet another comeback loss against Washington. With the 4-3 loss, the Mets drop three games back of first, though they'll have another chance to make up ground at the end of the month. Hopefully they'll get Travis d'Arnaud and acquire some offensive help before then. 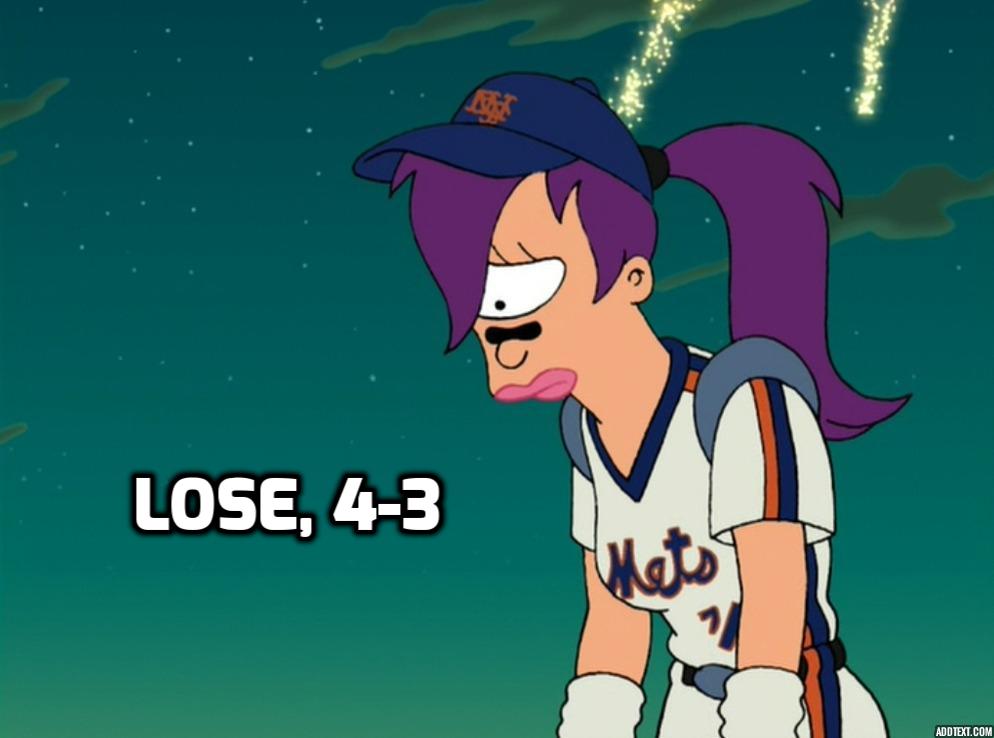 The Mets scored all three of their runs in the fourth inning off of Nationals starter Jordan Zimmermann. Ruben Tejeda and Daniel Murphy led off the inning with singles, but after a Lucas Duda strikeout and a fly out from Wilmer Flores, it looked like Washington would escape the inning unscathed. Thankfully, Kirk Nieuwenhuis hit a two-out, two-run double, and was then driven in by Kevin Plawecki to give the Mets a three-run lead.

Noah Syndergaard gave up an RBI single to Michael Taylor in the bottom of the fourth, but did well to hold Washington off the board otherwise despite issuing five walks in five innings. Such control struggles are just part of the growth process for Syndergaard, and it was encouraging to see him stay focused in a game where he didn't have his best stuff.

After Syndergaard departed, Hansel Robles threw a scoreless sixth before passing the ball to Jenrry Mejia for the seventh. Mejia was the only Met pitcher who really looked on today, throwing a very effective 1-2-3 inning against the heart of the Nationals batting order. Terry Collins's insistence on sticking to his bullpen formula to bring in Parnell for the eight rather than staying with Mejia could very well have cost the Mets the game.

For Parnell, Washington continues to be his hell—his ERA at Nationals Park is almost nine. Parnell's struggles in D.C. are likely little more than sample-size nonsense, but his generally mediocre peripherals are notable. For the season, Parnell has a K/9 of 6.08 and a BB/9 of 4.05 with a HR/FB of 0. The sample size is extremely small and Parnell has gradually been regaining velocity, but for the moment the bridge to Familia seems more than a little fragile.

While this loss definitely stings (as most blown leads do), it by no means puts a fork in the Mets' season. After their next three series against the Dodgers, Padres, and Nationals (all at home), the Mets play all but one series in August against teams that are currently .500 or worse. The September schedule is also incredibly easy, with the Nationals and the Yankees as the only contenders the Mets will play. The Cubs are hardly running away with the second Wild Card and the Nationals are within reach for the division race with nine head-to-head games remaining, so Mets fans should be looking forward to some exciting and meaningful September baseball for the first time since 2008.