Games don't get much better than this.

Everything clicked for Noah Syndergaard and the Mets as they opened their series against the Padres with an easy 4-0 win. Syndergaard was perfect through six and pitched eight shutout innings with nine strikeouts. His 85 game score ties him for the 21st-best start in the National League this season—Jacob deGrom has done better than that three times, for reference. And on the offensive side, Lucas Duda hit a mammoth home run and Curtis Granderson parked one in the Pepsi porch, as well. 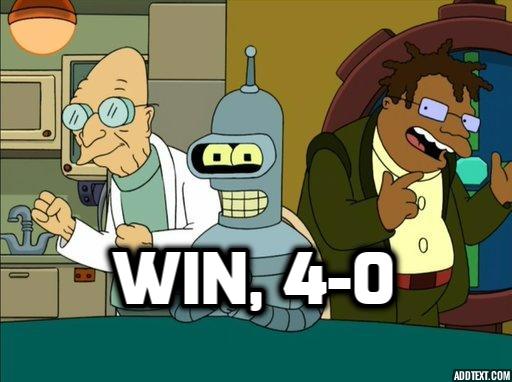 The Mets set the tone very quickly in the first inning. Syndergaard retired the side in order with two strikeouts in the top half of the inning, and Granderson led off the bottom half with an opposite field single. Things seemed to stall when Ruben Tejada hit a ground ball right to the second base bag for an unlucky double play, but Daniel Murphy promptly singled and Lucas Duda hit one of the longest home runs in Citi Field history while behind 0-2 in the count to give the Mets an early lead.

It was smooth sailing from there for Syndergaard. He retired the next fifteen batters he faced with little trouble before allowing a leadoff single to Will Venable in the seventh. Tejada then tried to get too fancy on the next play, failing epicly on a behind the back flip and putting runners at the corners with two outs. Syndergaard was unphased, however, getting Matt Kemp to pop up and Justin Upton to hit into a double play to escape the jam. Syndergaard came back out for the eight and allowed a single to Yonder Alonso, but he struck out Jedd Gyorko and Alexi Amarista to end his outing. Syndergaard went eight scoreless, allowed three hits, no walks, no runs, and struck out nine.

In the bottom half of the inning, Juan Lagares pinch hit for Syndergaard and did a nice job taking a pitch up and away down the right field line for a double. That chased Padres starter James Shields from the game and brought in Shawn Kelley, who promptly surrendered a two run home run to Curtis Granderson. Tyler Clippard came on in the ninth and allowed a leadoff double, but then got two weak ground balls and a pop up to close out the shutout.

Syndergaard has been nothing short of amazin' so far. In 86.2 innings this year, he has a K/9 of 9.45, a BB/9 of 2.08, an ERA of 2.70, and a FIP of 2.63. Neither his BABIP, LOB%, or HR/FB is deflated, indicating that his performance is totally legitimate.  Since 1969, only eleven rookie pitchers have posted a better FIP than Syndergaard has thus far - that list includes all time greats like Dwight Gooden, Orel Hershiser, and Fernando Valenzuela. The last rookie pitcher had a better FIP was TIm Belcher in 1988. Syndergaard is in some truly elite company.

Despite those impressive statistics, Syndergaard probably won't win rookie of the year. He's currently second in the NL in rookie pitcher WAR, though he should have no problem passing and staying ahead of Chris Heston. The bigger challengers are Matt Duffy, Joc Pederson, and Kris Bryant, all of whom have already accrued more than 3 WAR. I can see an argument for Syndergaard over Pederson and Duffy by the end of the year being quite valid, but Bryant is doing some truly impressive things as a rookie and is arguably getting unlucky with his current home run rate. There's a chance Thor can steal the award away, but it seems unlikely.

With the Nationals loss to Jose Fernandez today, the Mets are now a single game back of the division leaders. The Cubs also lost, and the Giants are currently losing to Milwaukee, meaning the Mets have a chance to gain ground on all of their major competitors for postseason spots today. Can't ask for much more than that.