David Wright hit a long home run in his first at-bat off the disabled list.

There was a time last night that the Mets trailed the Phillies by five runs, though you might be hard pressed to remember that with the way things turned out in the end. The Mets broke franchise records with eight home runs and sixteen extra-base hits, scored sixteen runs, and beat the Phillies with relative ease. With the Nationals off last night, the Mets now lead the National League East by five-and-a-half games. It’s tough to choose which browser tab to stare at more this morning: the standings or last night’s box score. 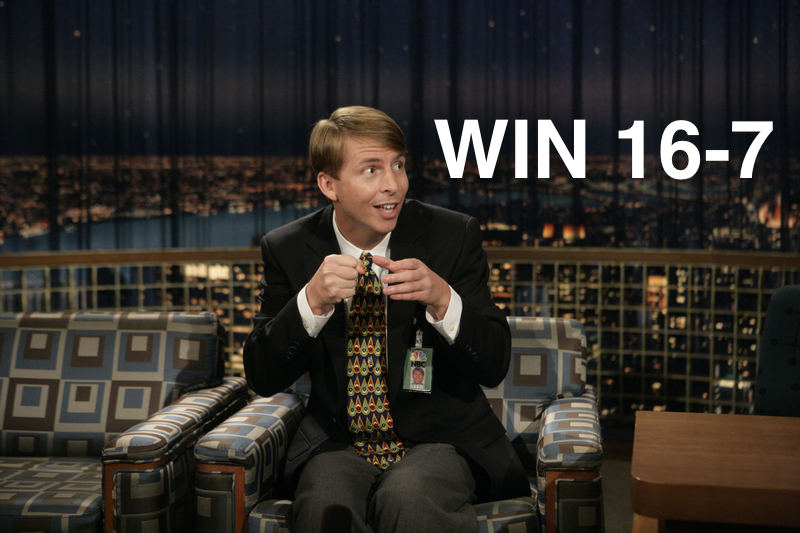 The Phillies are a very bad team, and Jacob deGrom has been one of the very best pitchers in baseball this year. But last night, deGrom didn’t have it, as he struggled to hit his spots with any of his pitches. He didn’t get any help when the home plate umpire blew a call against the very first batter he faced, but he didn’t do himself any favors, either, as he went on to give up all seven of Philadelphia’s runs in just two-and-two-thirds innings.

After deGrom gave up the first three of those runs in the first, however, David Wright led off the top of the second in his first plate appearance since hitting the disabled list in early April with a hamstring injury and an eventual spinal stenosis diagnosis. All he did was hit a mammoth home run that landed in the second deck of the left field seats at Citizens Bank Park. Had the Mets lost, that home run would have been something to remember anyways. How often and how well Wright can play given the state of his back were questioned, and probably will be going forward, but to see him hit a baseball about as far as anyone has recently was a very pleasant sight.

The game turned into a home run derby from there. Cameron Rupp hit a solo shot in the second for the Phillies, and Juan Lagares answered with a solo home run in the third. In the bottom of that inning, deGrom gave up a three-run home run to Domonic Brown, which gave Philadelphia a 7-2 lead at the time.

deGrom stayed in for another out but did not finish the third, as Terry Collins called upon Sean Gilmartin. deGrom threw 82 pitches, 50 of which were strikes, struck out three, walked three, and gave up the aforementioned three home runs. His fastball wasn’t maxing out quite as high as it usually does, but his 95.8 mile per hour average on the four-seam last night was right within his normal range for the 2015 season. Even the best pitchers occasionally have off nights, and it seems like that’s all last night was for deGrom.

Pitching through that massive swing was Gilmartin, who finished the third for deGrom without issue and threw three more scoreless innings after that. He struck out four, didn’t walk anyone, and allowed just three hits. His work on the mound, and that single at the plate, gave the Mets the chance to come back, which they did in grand fashion, and prevented Philadelphia from doing the same. Gilmartin now has a 2.34 ERA and 2.67 FIP in 42.1 innings this season.

The Mets tacked on a run on a Juan Lagares single in the seventh. And their eighth and final home run came off the bat of Yoenis Cespedes in the ninth. The rest of the bullpen pitched well, too, to finish the game, as Hansel Robles, Eric O’Flaherty, and Carlos Torres threw a scoreless inning apiece. 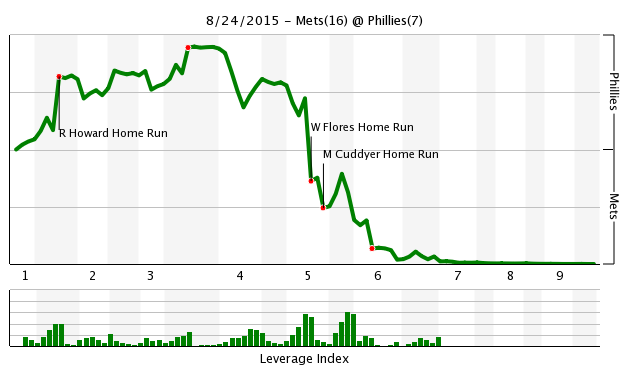