A late blown lead proves to be no obstacle for your new 2015 Mets.

The Mets won their sixth-straight game on Saturday night, topping the Braves by a score of 6-4. Kelly Johnson led the way with some more late inning heroics after Tyler Clippard coughed up the lead in the eighth. Noah Syndergaard, in his first start after being skipped, was excellent in seven innings, striking out eight and allowing only one run. And of course, Yoenis Cespedes hit another home run. 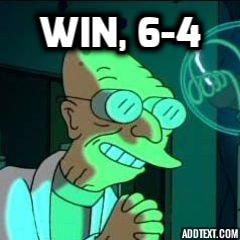 The Braves got off to a fast start, scoring a first inning run on a walk and a weak single from Freddie Freeman. That 1-0 lead held up for the first three innings as the Mets repeatedly squandered opportunities with runners in scoring position. In the fourth, Daniel Murphy hit a leadoff double to tie Jose Reyes for the third most doubles in Mets history, and David Wright drove him in with a single to tie the game. A single and two wild pitches later, Wright himself came home to score, giving the Mets a 2-1 lead.

Murphy got things started again in the sixth with another leadoff double. Wright struck out and Michael Conforto walked before Travis d'Arnaud hit a hard single up the middle to score Murphy. Then in the eighth, on a 3-0 count, Cespedes launched yet another home run, giving the Mets a 4-1 lead that seemed all but automatic with Tyler Clippard and Jeurys Familia coming in.

In a continuing effort to limit his workload, Syndergaard was lifted after 94 pitches, ending his outing after seven dominating innings. Clippard then entered the game and allowed a walk and a single in front of pinch hitter Adonis Garcia, who hit a game tying, three run home run. Clippard (who has struggled a bit of late) said he was tired after the game and will hopefully get some rest over the next couple of days.

Earlier in the season, a blown lead late in the game probably cripples the Mets, but this team is a far cry from the one we saw in May and June. In the top of the ninth, d'Arnaud hit a leadoff double and Kelly Johnson immediately drove in pinch runner Eric Young Jr. with the go ahead run. Cespedes tacked on an insurance run with a bases loaded fielders choice to make it 6-4. Two runs was more than enough for Familia, who put the Braves down quietly in the bottom of the ninth for his 40th save. With 20 games to go, Familia is on pace to break Armando Benitez's single season save record for the Mets, a fitting accomplishment given how stupidly good Familia has been since taking hold of the job.

This sort of win feels almost common place for Met fans at this point. The current team finds a way to win despite seemingly any obstacle put in their way (though the Braves bullpen is hardly much of an obstacle). With contributions coming from every corner of the roster, it's impossible to count the Mets out whatever the current score, and it certainly makes watching games a whole lot more exciting.

With the win, the Mets clinch their first season of .500 or above baseball since 2008. The Nationals dropped their fifth straight game, getting shut out by the Marlins 2-0, which pushed the Mets lead in the division to a whopping 9.5 games. The Nationals have dropped back 5.5 games in the course of six days. The Met magic number is now 12 (Ron Darling seems the most appropriate choice).