"You've gotta be kidding me! This team just doesn't know how to lose!" —Gary Cohen

The Mets had Keith Hernandez (and everyone else) laughing in disbelief again, as they rallied from three down in the ninth to win in extras, 10-7. The game was rife with defensive miscues, and not a single pitcher that should be on the postseason roster was used before the tenth inning.

The Mets were one out away from a loss before a double, a walk, and a three-run home run from Daniel Murphy tied the game in the top of the ninth. The Mets scored three in the tenth to extend their winning streak to seven games. 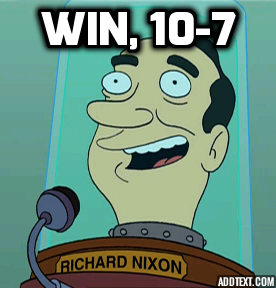 The Mets took an early lead on a screaming line drive home run from Michael Conforto in the first. Then in the bottom of the third, Lucas Duda was unable to stay on the bag on a slow ground ball to the pitcher and the Braves strung together a few soft hits to tie the game at two. Some hometown scoring made both runs earned for Jon Niese, who got little help from the defense behind him. Events unfolded similarly in the sixth, when a Juan Uribe error allowed the Braves to pull ahead 3-2.

In the seventh, Kirk Nieuwenhuis walked and Kevin Plawecki singled to put runners on the corners. Pinch hitter Michael Cuddyer was then hit by a pitch, loading the bases for Curtis Granderson. Granderson, who is overlooked as the stabilizing offensive force for the Mets, grounded a single into right field to score two and give the Mets a 4-3 lead.

In the bottom of the seventh, Tim Stauffer replaced Niese and the Mets' defense again faltered when Daniel Murphy missed a play on a Freddie Freeman liner (scored a single) to put runners on the corners. Stauffer got a comebacker from the next batter, but elected to go for the double play rather than get the runner at home, allowing the Braves to tie the game at four. Then in the eighth, Stauffer, Dario Alvarez, and some more poor defense conspired to allow three runs to cross, putting the Mets in a 7-4 hole.

At this point, a loss seemed inevitable, though it would hardly have been a devastating one—the Mets had rested most of their regulars and would still have had an 8.5 lead in the division. But this team would not go quietly into the Atlanta evening. Juan Lagares doubled with two outs in the ninth and Curtis Granderson walked, bringing up Daniel Murphy as the tying run with two outs. And in 2015 Mets fashion, Murphy hit a three-run home run that left the Braves, Mets fans, and the SNY booth stunned.

Somehow, Bobby Parnell did not give up a run in the bottom of the ninth, and the Braves literally threw the game away in the top of the tenth when Hector Olivera made a poor throw to second on a Kevin Plawecki ground ball. The Mets tacked on two more runs thanks to some further Braves bullpen incompetence, and Addison Reed secured the 10-7 win for his first save as a Met.

With the perpetually struggling Marlins coming into town next, the Mets can get their third double-digit win streak of the season with a sweep. The Nationals shut out those Marlins yesterday, but the Mets' magic number fell to 11 (Tim Teufel) anyway.