Carlos Beltran led the Yankees to a 5-0 win over the Mets in the second game of the weekend Subway Series. Noah Syndergaard allowed five runs—all on home runs—in six innings of work, and the Mets were unable to get anything done against Michael Pineda or the dominant Yankees bullpen. 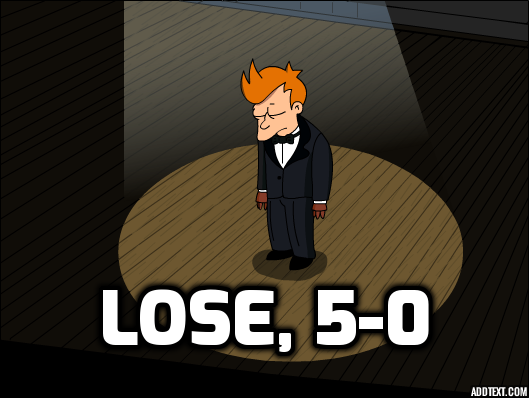 The Yankees got off to a fast start in the first inning with softly hit singles from Jacoby Ellsburry and Brett Gardner. Syndergaard then got ahead 0-2 on Beltran before the ex-Met turned around a 100 MPH fastball and parked it in the right field seats for a three-run home run. Unphased, Syndergaard proceeded to set down the next twelve batters in order before allowing a leadoff triple to Dustin Ackley in the fifth. Syndergaard worked out of that jam by striking out Didi Gregorius and Michael Pineda and inducing a ground ball from Jacoby Ellsbury, and it seemed the Mets still had a good chance .

Syndergaard's string of success was interrupted in the sixth. Beltran singled to center in front of a monstrous two-run home run from Brian McCann to give the Yankees a 5-0 lead. Syndergaard allowed a double to the next batter, but struck out Chase Headley and Dustin Ackley to end the inning and his start. He finished with six innings of five-run ball, eight strikeouts, and no walks—a final line that sells him short. Outside of the two home runs that came with men on base, Syndergaard dominated Yankees hitters, throwing strikes and working efficiently for the majority of the afternoon. He allowed only a few hard-hit balls, but sometimes the baseball gods smite you with BABIP and sequencing.

The Mets' offense, meanwhile, struggled to get anything going against Yankees starter Michael Pineda. Their first real opportunity came in the sixth, when a pair of leadoff singles pushed Yankees manager Joe Girardi to bring in Justin Wilson to face Daniel Murphy. Murphy walked to load the bases, but David Wright and Juan Uribe then struck out to end the threat.

That pair of strikeouts started a string of seven straight whiffs for Yankees relief pitchers, who kept the Mets bats quiet until the ninth inning. With two outs, Michael Cuddyer and Wilmer Flores delivered infield singles, bringing Travis d'Arnaud up as a pinch hitter against Yankees closer Andrew Miller. Miller induced a ground ball to third to end the threat and shut out the Mets, pushing the Subway Series to 3-2 on the season in favor of the Yankees.

With the loss and Washington's 5-2 victory over Miami, the Mets' magic number remains at eight (Gary Carter). They still have a seven-game lead in the division. Matt Harvey takes the mound in a likely abbreviated start for the finale of the series against the Yankees tomorrow night.