The Mets and their captain are heading back to the postseason.

Share All sharing options for: Mets vs. Reds Recap: Harvey, Duda, and Wright seal the deal

After a nine-year playoff drought, the Mets clinched their return to October baseball with a 10-2 win over the Reds. Matt Harvey pitched a driven 6.2 innings, allowing only two runs and striking out six. Lucas Duda delivered the most significant offensive blow with a first-inning grand slam, but the most memorable hit belonged to David Wright, who launched a three-run home run in the eighth to erase any doubt of a Mets win. 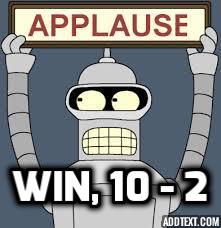 The Mets wasted no time today, beating up Reds starter John Lamb for five runs in the first two innings. Lucas Duda and Curtis Granderson homered in the first and second innings respectively. The Reds struck back in the bottom of the second, scoring two runs on an Ivan DeJesus double, but Michael Cuddyer got the runs right back in the top of the third with a two-run double of his own.

From that point on, the Mets cruised. Harvey bent often but never broke, allowing nine hits but only the two second-inning runs. Expected by many to go five or fewer innings, Harvey reportedly asked Terry Collins to go back out for both the sixth and seventh inning. He eventually yielded to Addison Reed, who got the final out of the seventh inning. Tyler Clippard ran into some trouble in the eighth, but escaped unscathed.

Going into the ninth, the Mets hadn't had a hit since the third inning. Despite that, the score was 7-2 and Jeurys Familia was warming up—the clinch was all but inevitable. However, in a season that has had more than its fair share of magical moments, the Mets had to deliver one more. After singles from Kelly Johnson and Curtis Granderson scraped by Joey Votto at first base by the narrowest of margins, David Wright came to the plate and blasted a three-run home run to left-center field. For the Mets' captain, who has waited nine years to return to the postseason and spent the majority of his season rehabbing a career-threatening back injury, that had to feel incredible.

Familia entered the game with an eight-run lead and was his typically dominating self. He gave up two soft hits with two outs, but struck out Jay Bruce swinging to end the game and start the celebration. Wright stayed out of the main pile, embracing Daniel Murphy and the outfielders. The team then waited for him to enter the clubhouse before the champagne started flowing.

With the Nationals eliminated and the division crown locked up, the race is on for home field advantage in the NLDS. The Mets are percentage points behind the Dodgers, who play the Rockies tonight; a Los Angeles loss would put the Mets in front by half a game.