Jacob deGrom was great, and the Mets scored eight runs.

The Mets went into their series finale in Cincinnati on Sunday afternoon as the National League East champions. They rolled out a lineup that resembled a road game split-squad lineup from the earliest spring training games, but they still scored early and often and blew out the Reds 8-1 to complete a four-game sweep. 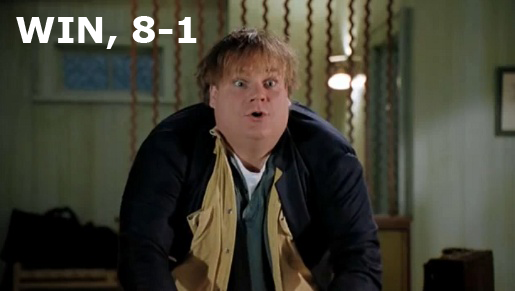 The most encouraging part of it all, though, was Jacob deGrom’s performance. Sure, he and everyone else who pitched for the Mets were pitching against a bad team, but deGrom looked like his dominant self. Having been given an extended period of rest between his previous start and this one, he looked sharp as he struck out nine, didn’t walk anyone, and gave up one run in six innings. As the Mets look ahead to the playoffs, deGrom is one of three pitchers—Matt Harvey and Noah Syndergaard being the others—who Terry Collins is certain he will use in his starting rotation.

As for all of those runs the Mets scored, they hit a bunch and took advantage of awful defense by Cincinnati. Michael Conforto doubled in one run in the first, Dilson Herrera hit a two-run home run in the second, and deGrom singled in the team’s fourth and fifth runs in the third. In the fifth, deGrom reached on an error, which also scored a run, and Juan Lagares drove in another with an infield single. Kevin Plawecki topped off the scoring with a solo home run in the sixth.

That and a Dodgers loss in Colorado yesterday leave the Mets 1.5 games ahead of Los Angeles—which still hasn’t clinched the NL West but should very soon—for home-field advantage in the first round of the playoffs. 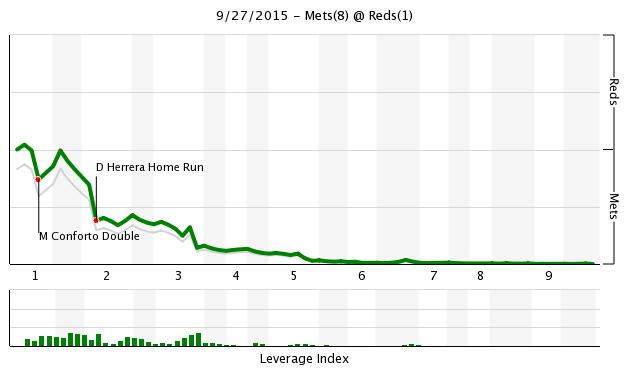