Addison Reed's fastball has been key to his success with Mets

The 26-year-old has had a great second half, especially since he was acquired by the Mets.

Share All sharing options for: Addison Reed's fastball has been key to his success with Mets

The last of the seven players the Mets acquired via trade between late July and the end of August, Addison Reed might turn out to be fairly important. Postseason-bound for the first time in nearly a decade, the Mets’ bullpen is headlined by the dominant Jeurys Familia. Reed and fellow new acquisition Tyler Clippard are now among the Mets’ high-leverage relievers who will be tasked with bridging the gap—if there is one—between the team’s starting pitchers and Familia in the postseason.

The Reed trade didn’t generate a ton of buzz when it happened, which was understandable since the Mets had already acquired Juan Uribe, Kelly Johnson, Tyler Clippard, and Yoenis Cespedes before the non-waiver trade deadline. Regardless of that context, Reed hadn’t been having a great season with the Diamondbacks before the trade. At the time, he had a 4.20 ERA in 40.2 innings for the season. His strikeout rate was down, and his walk rate was up. And even before those rates changed for the worse, Reed’s ERA hadn’t been all that great in his time with Arizona and, before that, the Chicago White Sox.

After a miserable outing on June 20 this year, Arizona had a 5.92 ERA, and Arizona sent him to the minors. He didn’t pitch in the big leagues again until July 29, but he’s been successful ever since his return. He had a 1.65 ERA with 14 strikeouts and three walks in 16.1 innings with the Diamondbacks before the trade. Since joining the Mets, he has a 0.00 ERA with 13 strikeouts and four walks in 13.0 innings.

Because of the timing of his demotion to the minors and return to majors, Reed’s first- and second-half splits make for an easy point of comparison. Before the demotion, he had struck out just 17.7 percent of opposing hitters and walked 9.7 percent. The average major league relief pitcher has struck out 22.1 percent and walked 8.6 percent. In the second half, though, Reed has struck out 22.9 percent of opposing hitters and walked just 5.9 percent. Let’s take a look at what’s changed.

It’s not velocity. Reed’s fastball, a four-seam, has averaged 93-and-change miles per hour in every month this season except August, when it actually dipped to 92.8. He’s throwing his slider about as hard as he has all season, too. 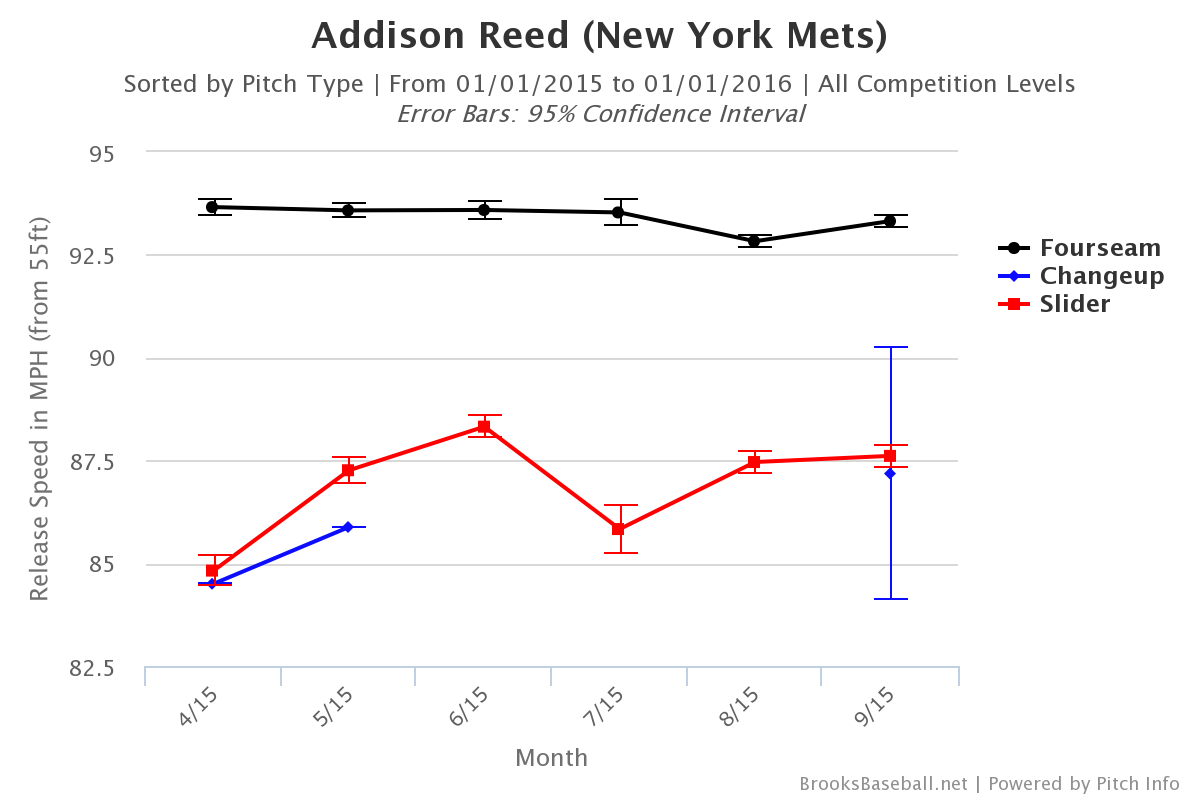 His pitch usage has changed a bit, though. Before his minor league stint, he had thrown his fastball less than two-thirds of the time, but he’s used it more often since coming back, and he’s used it most—75.5 percent of the time—in September with the Mets. 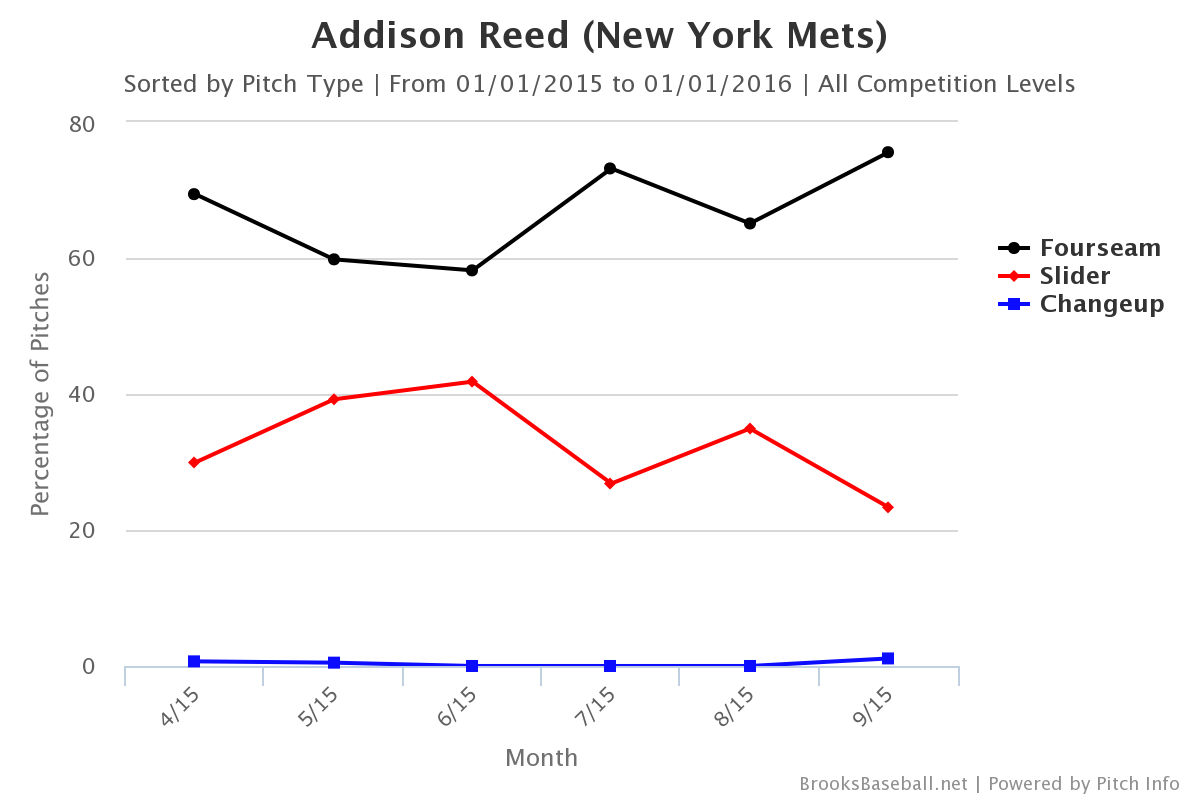 The increased use of the fastball is understandable, as Reed has gotten a lot more swings-and-misses with the pitch since he came back from the minors. Opponents have whiffed on 13.5 percent of his fastballs since then, a significant improvement on what he did before the demotion. He’s gotten those whiffs up in the strike zone or above it, which he wasn’t doing at all in the first half. Here's a comparison of his whiff rate on fastballs in the first and second half from Brooks. 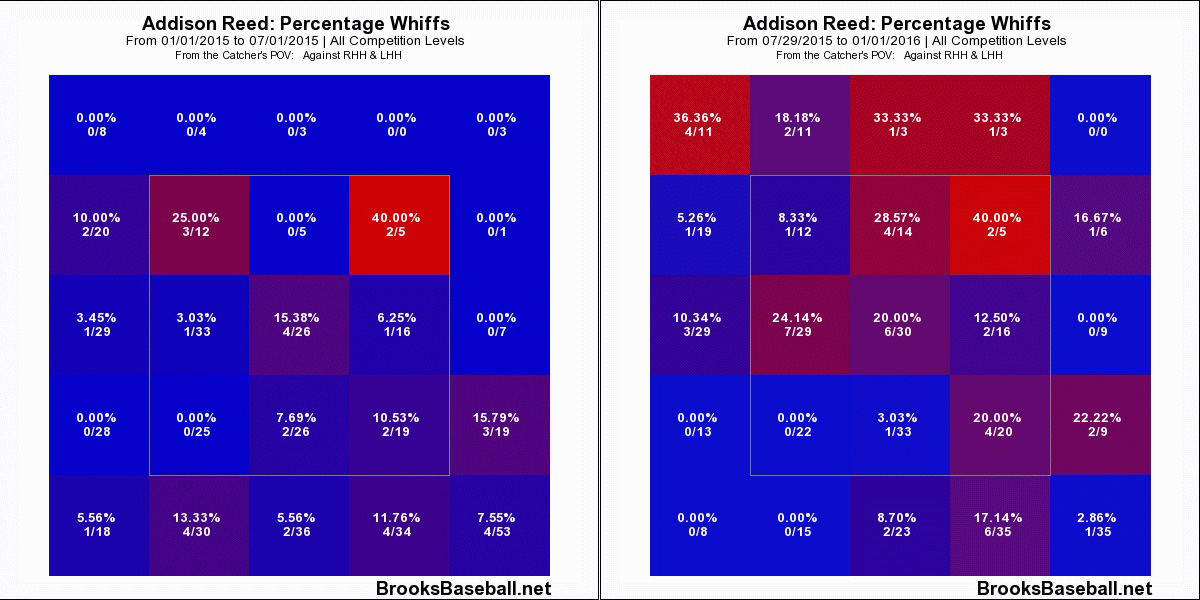 Before the demotion, Reed wasn't really fooling anyone with the pitch, especially when he threw it above the strike zone. No opposing hitter swung and missed in that area. But since his return, he's induced plenty of whiffs in the upper part of the zone and above it.

It's pretty standard stuff, but here's an example of Reed climbing the ladder to get Carlos Beltran to swing and miss for a strikeout during the Mets' victory over the Yankees on September 18. Reed went with all fastballs in the at-bat, which lasted just three pitches. He started with a waist-high fastball that caught the inner corner of the plate. He followed that up with a waist-high fastball on the outer half, which got Beltran to swing and miss. And then he went way up with the fastball and got Beltran to strike out:

There's nothing revolutionary about Reed's fastball here, but he's been using it a lot more effectively. He'll certainly be one of the Mets' high-leverage relief pitchers in the playoffs. Beyond that, he's eligible for his second year of arbitration in 2016, and perhaps he's shown enough lately for the Mets to tender him a contract this winter. He's making just under $5 million this year, and the Mets haven't had a big payroll in recent seasons. But maybe they'll keep Reed around.

That's something to worry about after the season, though. For now, Reed helps fill the void created by Jenrry Mejia's suspensions as the Mets try to make some noise in the playoffs.