The Mets were beaten by the Phillies, a rare occurrence this season.

The Mets have beaten up on the Phillies all year, but they lost to them last night in Philadelphia. In the first game of a three-game series, weather permitting, Bartolo Colon gave up three runs on eight hits in five innings, all of which scored on a Darin Ruf home run in the first inning. He struck out three and didn’t walk anyone, but it wasn’t exactly an impressive outing considering Philadelphia’s very weak lineup. 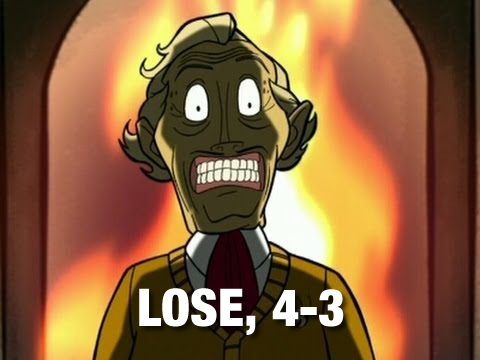 Despite facing David Buchanan, who left the game with a 7.54 ERA on the season after allowing one run in four-and-two-thirds innings, the Mets left a bunch of runners on base against him and the Phillies’ bullpen. Lucas Duda’s solo home run in the fourth inning was the only time they scored until the ninth inning.

One of the luxuries of having clinched the division so early is that the Mets are able to experiment a bit with ideas for the postseason, at least as long as the weather allows them to play the rest of their regular season games. So Jon Niese made a relief appearance last night, and it didn’t go particularly well. He gave up a run in one-and-two-thirds innings on three hits. One of the five outs he recorded came on a smoked single by Cody Asche, who foolishly tried to turn it into a double against Yoenis Cespedes’s arm and was thrown out at second base.

The run charged to Niese scored after he was pulled in favor of Erik Goeddel, who gave up a single with runners on first and third before striking out Ruf to end that inning. And Carlos Torres made his first appearance in a while with a scoreless eighth inning.

The Mets almost came back against Ken Giles in the ninth. Duda hit another home run with two outs and Daniel Murphy on second base, but Travis d’Arnaud then struck out to end the game. That leaves the Mets at 89-68, one game ahead of the 88-69 Dodgers, who won last night to clinch the NL West, for home-field advantage in the National League Division Series. 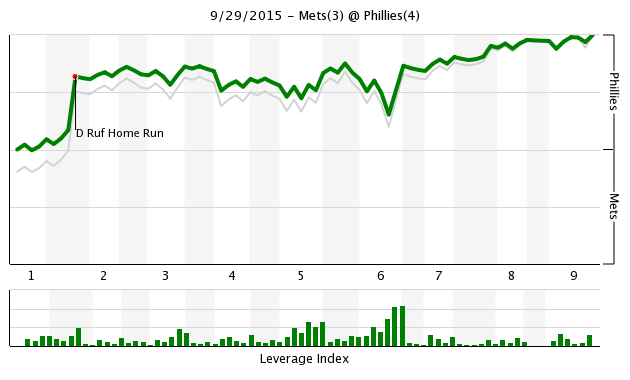