The Mets' young catcher and old pitcher kept up their recent hot streaks.

The Mets battery of Travis d'Arnaud and Bartolo Colon were the stars tonight, leading the Mets to a 7-0 win over the Marlins. Colon pitched the first Met complete game of 2015, using only 100 pitches and adding in one of the niftier defensive plays of the season. Meanwhile, d'Arnaud went 2-for-4 with an absolute bomb of a home run to center field that started the Mets scoring in the first inning. 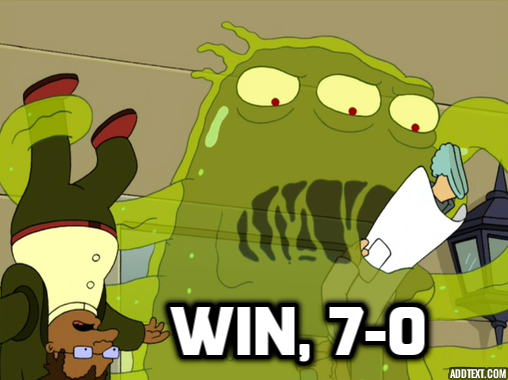 The Mets struck quickly in the first inning - after David Wright singled and Yoenis Cespedes walked, d'Arnaud launched his home run to give the Mets a 3-0 lead. Wilmer Flores jacked his own home run on the next pitch, and it was suddenly 4-0 against Marlins starter Brad Hand. The onslaught continued in the second, when Juan Lagares pushed a home run out to right field to score two. d'Arnaud struck again that inning as well, with an RBI single that stretched the lead to seven.

While the Mets didn't score (or really threaten) for the rest of the game, it was inconsequential. Colon, despite striking out only two, absolutely cruised through the Marlins lineup. He induced two ground ball double plays and got another on a line drive to Flores, who doubled Dee Gordon off of first base. Colon also contributed the niftiest defensive play seen since Carlos Torres's 1-3-1 put out in Philadelphia during the sixth inning:

Colon was laughing after retiring Bour and has been for much of the last two weeks. He has rebounded fantastically from an absolutely horrible start in Colorado that had many wondering if his time had come. Since then, Colon has tossed 25 consecutive scoreless innings in three scoreless starts, both of which are career highs. At 42 years of age, this might be Colon's last hurrah, but he's certainly making a strong case for a rotation spot in the postseason over Jon Niese is Matt Harvey is indeed shut down.

Meanwhile, d'Arnaud now has a wRC+ of 160 in 189 PA this year. If he had enough at bats to qualify, d'Arnaud would be in a clear first place among catchers over Kyle Schwarber (148 wRC+, not enough plate appearances to qualify either) and Buster Posey (140 wRC+). d'Arnaud's 16.7% HR/FB rate is certainly a bit high, but his .306 BABIP is certainly reasonable and all of his peripheral stats look strong. While banking on any catcher to hit like Mike Piazza is probably unreasonable, d'Arnaud has made things look easy whenever he's been in the lineup. If his injury luck on strange plays every balances out, d'Arnaud will have a case as one of the best catchers in baseball as soon as next year.

While every win is important, this one felt like it had special signifigance. After a brutal loss last night and with the rumors of a Harvey shut down percolating throughout the media, Met fans everywhere likely felt a growing fear of another 2007. The Mets play tonight was another monument to the team's resiliency, reminding us that there is still a greater than 80% probability that the Mets will take the division and end the nine year playoff drought. Hopefully the return of Steven Matz tomorrow will build that momentum heading into a pivotal series in Washington.