Matt Harvey wasn't sharp in his much-anticipated start, but the Mets overcame a six-run deficit to beat the Nationals.

In their biggest game of the year yet, the Mets fell behind by six runs to the Nationals and came all the way back to beat them. With a ton of attention on him for the innings limit saga that happened over the weekend, Matt Harvey had one of his worst major league starts, though the final line could have been a bit better if not for a misplay by Yoenis Cespedes in the sixth that turned a bases-loaded single into a bases-clearing error that allowed four runs to score. 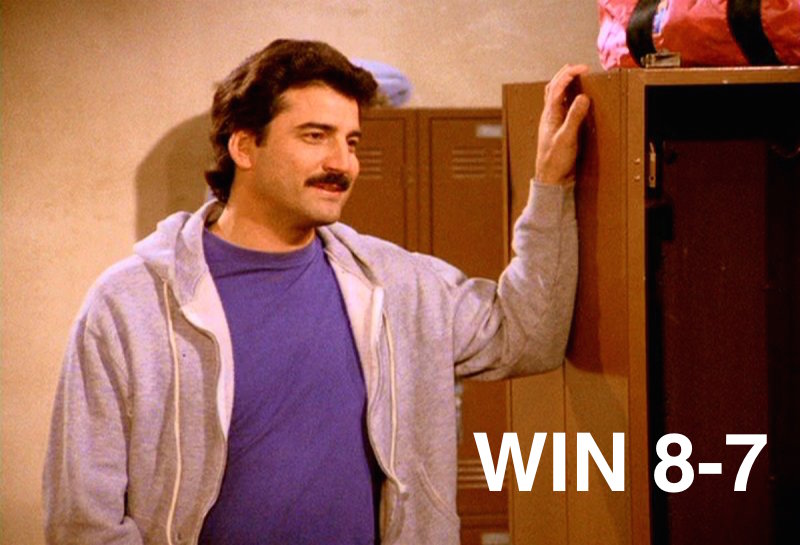 The final line on Harvey: 5.1 innings, 7 runs, 8 hits, 6 strikeouts, and 2 walks. Despite the Cespedes error, the runs were all earned because of a Jayson Werth double later in the sixth inning. Harvey threw 74 pitches, the majority of which were fastballs. When he makes his next start is still an open question.

The Mets trailed from the first inning, when Harvey gave up the first two of those seven runs. David Wright got one of those runs back in the top of the second with a leadoff home run, but Harvey allowed one in the bottom of that inning. And the Mets didn’t score again through the top of the sixth.

But after Harvey was pulled from the game, the Mets’ bullpen shut the Nationals down the rest of the way. Erik Goeddel got two outs to finish the sixth, and Addison Reed, Tyler Clippard, and Jeurys Familia pitched a scoreless inning each.

The Mets’ comeback came in the top of the seventh, a circus of an inning that saw the team score six times, thanks in part to an awful outing by Washington reliever Drew Storen, who was the third pitcher to appear in the inning. After a leadoff single by David Wright, the Mets made back-to-back outs. But Michael Conforto walked, and Wilmer Flores singled. From there, the Nationals walked the bases loaded, walked Curtis Granderson to bring in another run, and served up a three-run double to Yoenis Cespedes. Storen, who gave up that double, then couldn’t find the strike zone at all, issued a walk, threw a wild pitch, and then walked the next two batters to tie the game.

Storen got out of the inning on a Travis d’Arnaud line drive that was caught in right field, but with Jonathan Papelbon in to pitch the eighth—a two-inning outing as the Nationals were clearly desperate to win the game—pinch-hitter Kirk Nieuwenhuis hit a home run that felt as improbable as all three home runs that he hit in one game just before the All-Star break. The Mets were up 8-7, and that wound up being the final score.

Regular season games don’t get much more exciting or important than that one was. The Mets are now up six games in the division. Their magic number to win the division is 19, and with Jacob deGrom opposing Stephen Strasburg tonight in the series finale, they have the opportunity to sweep the Nationals, take a 7-game lead, and cut that magic number to 17. 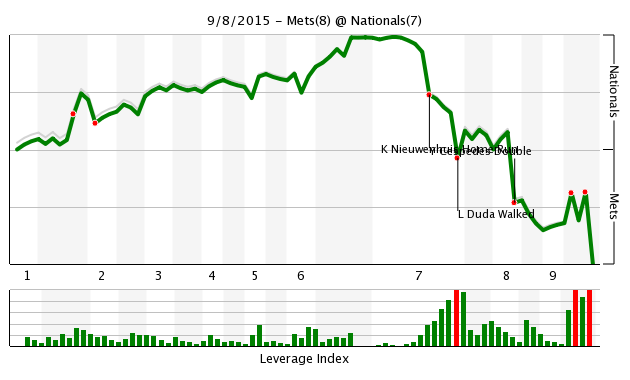