The 30-year-old agreed to a two-year deal with the Mets yesterday.

Share All sharing options for: Getting to know Mets relief pitcher Antonio Bastardo

Antonio Bastardo, left-handed pitcher and owner of one of the greatest names in baseball, started his professional career a little more than a decade ago when the Philadelphia Phillies signed him out of the Dominican Republic in 2005. He spent much of his minor league career as a starting pitcher with high strikeout and walk rates, and he made his major league debut with the big league club in 2009.

That year, the Phillies mixed up his role a bit as the season progressed. He started the year pitching out of the bullpen in Double-A, moved into the rotation there, got promoted to Triple-A, and got promoted to the big leagues, where he made five starts for the Phillies and didn’t fare well before hitting the disabled list with a shoulder strain. He didn’t pitch again until late August, and the Phillies only used him in relief—aside from two "starts" that lasted just one-and-one third and two innings, respectively—the rest of the way, giving him one appearance as a September call-up at the very end of the season.

Bastardo began the 2010 season with the Phillies, but he wound up spending a decent amount of the season in the minors, in part because of a nerve issue in his left elbow. But he spent the entire year working out of the bullpen, and the results at the major league level, while limited to a sample of 18.2 innings, were decent: 4.34 ERA, 2.73 FIP, 12.54 strikeouts per nine, 4.54 walks per nine.

Since the beginning of the 2011 season, Bastardo has pitched exclusively in the big leagues. His ERA has fluctuated a bit on a season-to-season basis, but his FIP has been between 3.00 and 3.34 in each of the last five years—always quite a bit better than the average major league relief pitcher. In total, Bastardo has a 3.58 ERA and 3.33 FIP for his career, and if we filter out those five starts at the very beginning of his major league career, he has a 3.34 ERA and 3.20 FIP as a reliever with 11.31 strikeouts and 4.38 walks per nine innings.

As for his arsenal, Bastardo is a three-pitch pitcher. He throws a four-seam fastball, changeup, and slider, and that mix hasn’t changed in his major league career. Per Brooks Baseball, he threw his hardest in 2010, when the four-seam averaged 94.16 miles per hour but dipped a bit in each of the following two seasons. He hung around that mid-92 range until last year, when he averaged 93.45 miles per hour with the pitch.

Speaking of last year, Bastardo spent it with the Pittsburgh Pirates after the Phillies traded him there following the 2014 season. As has been the case for several pitchers that have arrived in Pittsburgh in recent years, Bastardo changed some things working with pitching coach Ray Searage, who started working with him in spring training.

Searage didn’t get Bastardo’s walk rate under control, though at 4.08 per nine innings it was one of his better single-season marks. But Bastardo’s use of his pitches changed drastically, as it seems he threw his fastball much more often and his slider much less often. 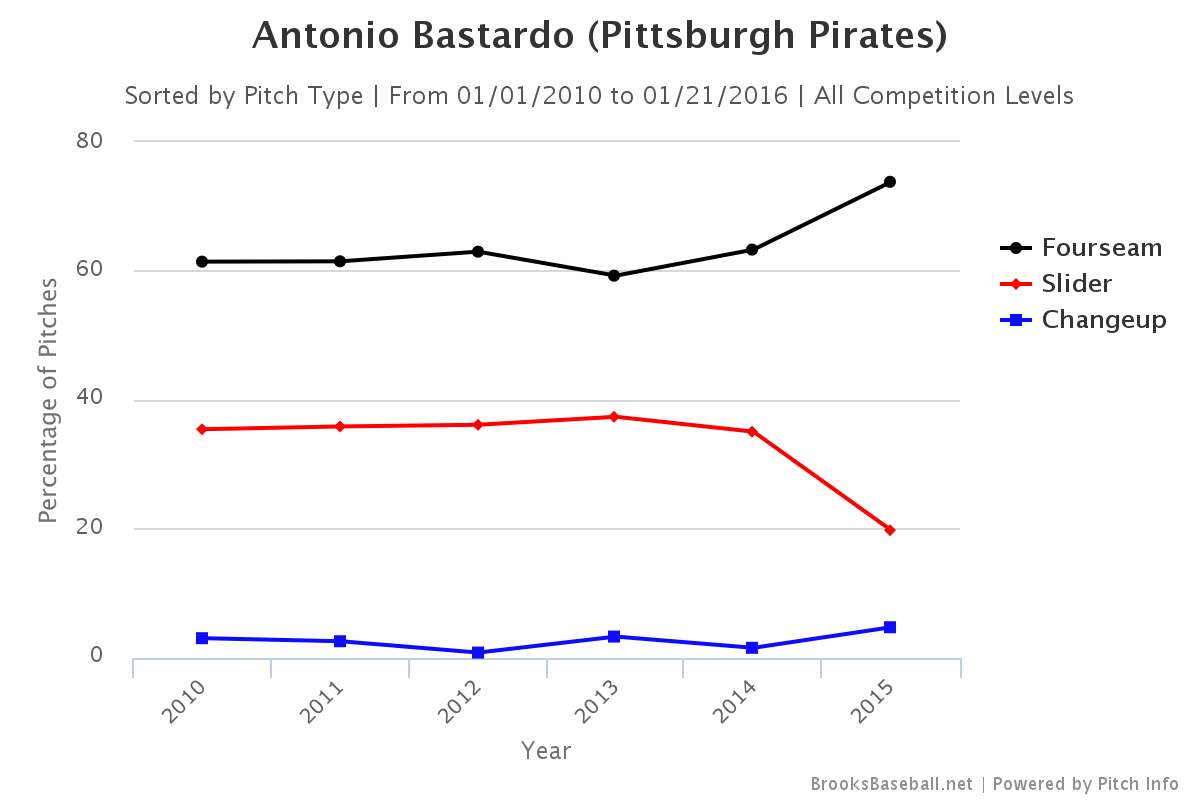 When it comes to handedness splits, Bastardo doesn’t really have them. He’s struck out lefties a bit more often than righties, his walk rate is virtually identical against both, and he’s been slightly better at limiting home runs when he’s faced right-handed hitters. As a result, he has a 3.30 FIP against lefties and a 3.36 FIP against righties over the course of his career.

Antonio Bastardo looks like he’ll be worth the contract the Mets signed him two: two years, $12 million. If he can keep doing what he did last year in Pittsburgh, that would be fantastic. He won’t have Ray Searage around, but Mets pitching coach Dan Warthen is no slouch and has made a name for himself over the past few years. A major revamp doesn’t seem like it would be in order, but perhaps Warthen can help him out a bit with the slider, even if he continues throwing it relatively infrequently.

Last but not least, head-to-head matchup stats don't have much use, but we can ignore that and enjoy the fact that Freddie Freeman has never gotten a hit against Bastardo, as Mark Simon of ESPN pointed out on Twitter last night. And if all else fails, we can always fall back on playing this every time Bastardo pitches: