A lineup of mostly reserves lost the 162nd game of the season.

Share All sharing options for: Hangover Mets lose to Phillies

Having already secured their wild card berth, the Mets lost to the Phillies 5-2 with a lineup of reserves. Kevin Plawecki and Alejandro de Aza each recorded RBIs and Gabriel Ynoa pitched well, but the lower tier of Met relievers coupled with bad defense coughed up the lead. 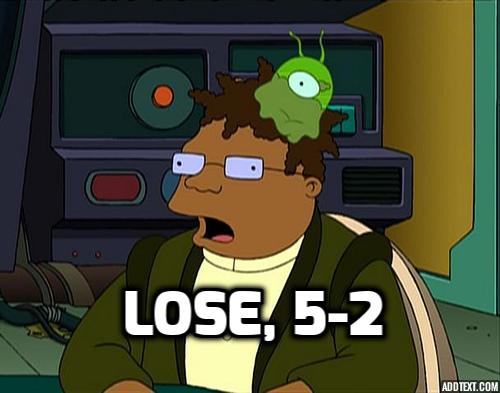 The Mets ran out a surprising number of starters, with Curtis Granderson, Asdrubal Cabrera, Jay Bruce, and Lucas Duda all receiving starts. Thankfully, Terry Collins backed off his original plan to have Syndergaard throw an inning to “stay fresh.” Instead, Gabriel Ynoa got the start opposite Jerad Eickhoff.

Ynoa’s start began well, as he kept the Phillies off the board for the first two innings, working around a couple of soft ground ball singles. In the third, the Phillies broke through, as Cesar Hernandez, Odubel Herrera, and Maikel Franco singled on ground balls to score a run. Ynoa was able to strand two runners by retiring Ryan Howard, but the Phillies had a 1-0 lead.

Meanwhile, Jerad Eickhoff tossed three perfect innings to start the game before walking Curtis Granderson to start the fourth. Juan Lagares pinch ran for Granderson, and Matt Reynolds pinch hit for Asdrubal Cabrera as Terry Collins began to remove his starters from the game. Reynolds struck out and Lagares was caught stealing, and while Jay Bruce followed with a soft fly ball single, Lucas Duda struck out to send the game to the bottom of the fourth with the Mets still down a run.

Gabriel Ynoa went back out for the fourth, with Alejandro de Aza replacing Jay Bruce. The Phillies went quietly, as did the Mets in the top of the fifth as Jerad Eickhoff tossed another 1-2-3 inning. In the bottom of the fifth, Ynoa retired the first two batters before Jerry Blevins entered to retire Odubel Herrera to end the inning.

The Met offense finally broke through against Eickhoff in the top of the sixth. Matt Reynolds hit a two out double, and De Aza promptly followed with an RBI singe up the middle that tied the game at 1-1. Eickhoff retired Duda to end the inning once again. Colton Murray, pitching in relief of Eickhoff in the seventh, also surrendered a run, when Kevin Plawecki drove in Kelly Johnson with a loud double, giving the Mets a 2-1 lead.

Josh Smoker held the Phillies scoreless in the bottom of the sixth, but things unraveled in the bottom of the seventh with Erik Goeddel on the mound. Andres Blanco lead off with a single and Aaron Altherr walked to put runners on first and second with no outs. A throwing error by Lucas Duda allowed one run to score, and another single from Cesar Hernandez restored Philadelphia’s lead. The floundering Goeddel was replaced by Josh Edgin, who surrendered a sacrifice fly to Jimmy Paredes but otherwise stopped the bleeding and kept the score at 4-2.

Unfortunately, Jim Henderson re-opened the wound in the eighth, allowing a Maikel Franco to score on a hard hit infield single that Henderson deflected to third base. Freddy Galvis fouled out to strand two baserunners, but the lead was stretched to three runs. Brandon Nimmo and Michael Conforto singled as the Mets tried to rally in the ninth, but Eric Campbell flew out and Kevin Plawecki grounded out to end the game.

The loss is of course inconsequential with the Mets headed for a Wild Card game in New York on Wednesday. With San Francisco’s win, their opponent is also set. The Giants will come into town for a showdown between Cy Young contenders, as Noah Syndergaard and Madison Bumgarner duel to send their team to an NLDS matchup with the Cubs.