A long time ago, in 2007, I went to spring training. It really was Beltran's fault. Had he hit the ball instead of just looking at it, the Mets probably win the whole thing and I go on my merry way. Because of Beltran, I found myself needing to go there and yell FFFFFUUUUUU to his face but, alas, he was in the witness protection program and I never laid eyes on him or his mole.

After last year's exciting and unexpected run I started to think I should go again. The clincher for me came on the night they announced the Cespedes deal. This was the night before the giant blizzard, and I was at a bar when the news came about the signing and decided right then and there I would go. As luck would have it, we had been working on a reunion in Miami of friends I grew up with in Spain as a refugee, and the two events happened to line up perfectly.

Fast forward to March 9th, and there I was on a shiny new Boeing 737-900 giving NJ the finger at 6:15 AM as I left for PSL. Most of you saw the tweets. Yes, it was really me, and yes, it was really happening. 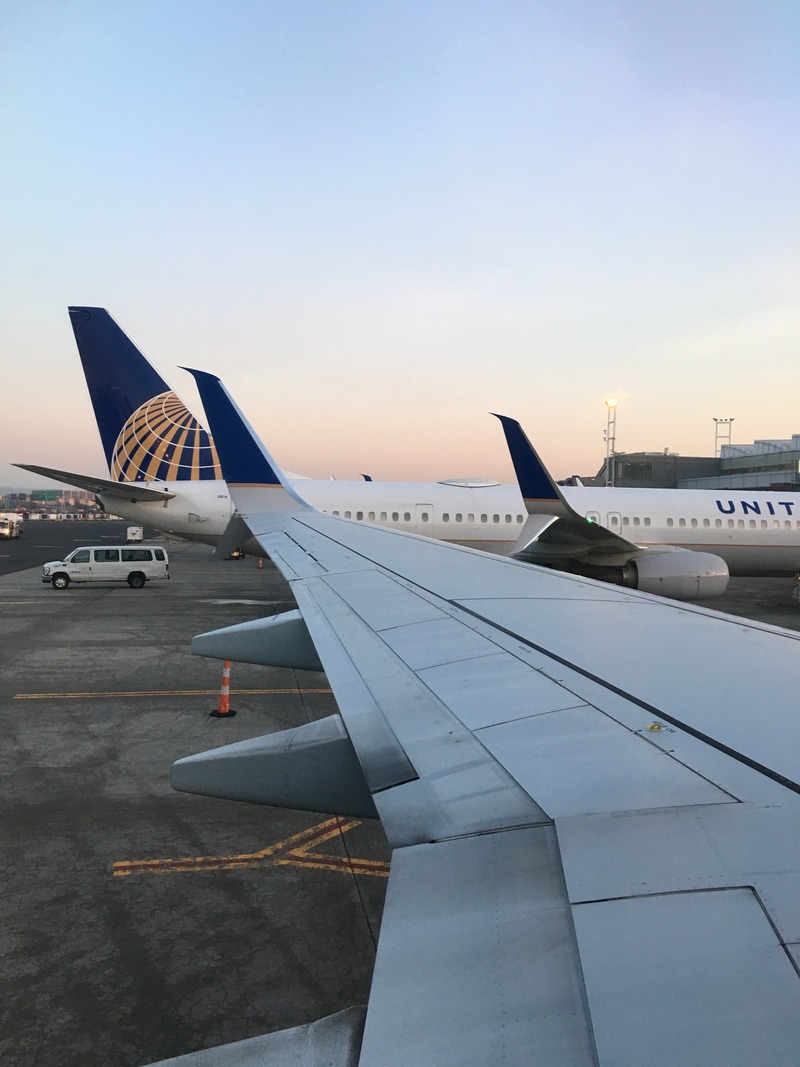 We landed at PBI right on time and proceeded to rent our chariot. What looked promising on paper turned out to be a disaster on the road. I was "upgraded" to a Jeep Compass...possibly the worst car ever built, but I digress.....my wife, displaying a great deal of balls (more than Beltran) said - "we don't check in until 4 pm, it is 10:30 am, let's go to the park and scalp tickets"....when I hesitated, she said "look, I got up at 4 am, with a bad knee, uphill both ways, with no shoes, in the snow.....I'm gonna see some baseball today....start driving". And so it was that I set up my phone GPS to "Tradition Field", and off we went.

Let me tell you about phone GPS.....you are taking your life in your own hands. My phone told me "you have arrived at your destination"....as I looked around, I was at a gas station. The two men in the corner with signs supporting a political candidate not to my liking didn't seem like the right people to ask, so we drove on. Finally, we found the place only to be confronted with a looong line of cars (tweeted about that). As I turned into the parking lot, the guy put the cones behind my car and said into the radio "the black SUV is the last one, park everyone else across the road". I shit you not. 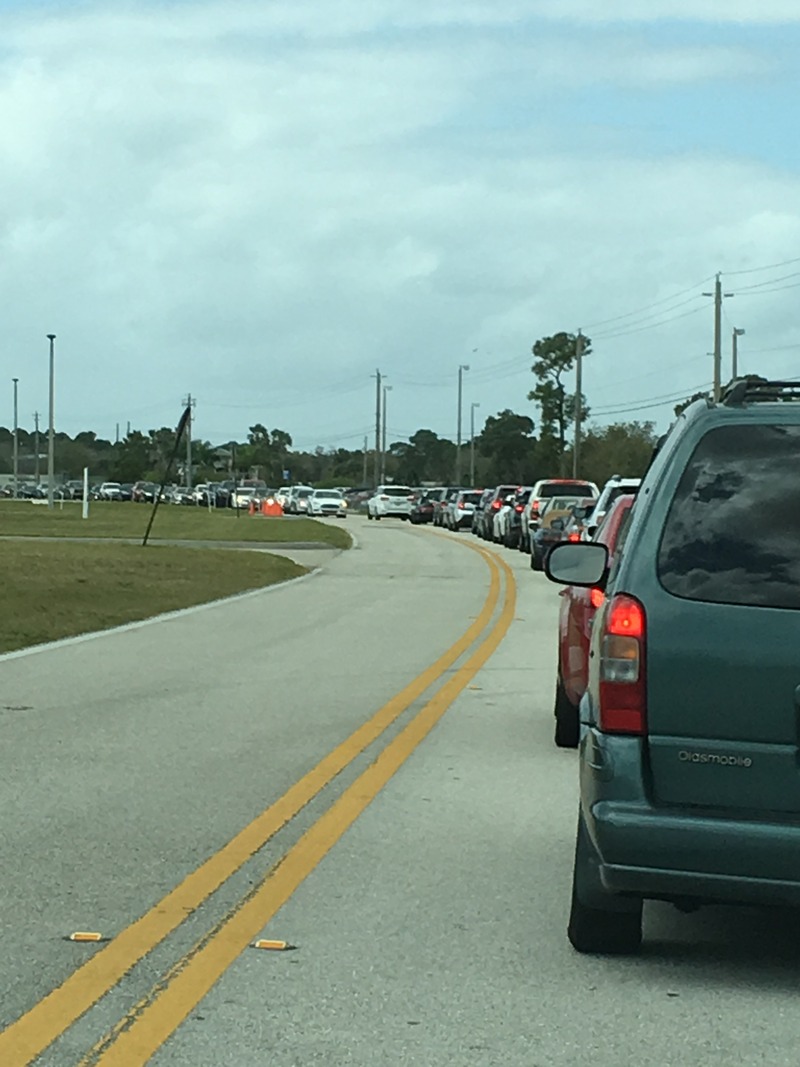 We pulled up to our parking spot, and I was sure this was all for naught, but no sooner did I turn off the ignition than a young man and girl came up and said "hey man, you need tickets?", so I said "let me see", and there was a pair of tickets in the shade, near home plate, for $40 each. Boom, done and before you could say "HELLO HELLO MR. ANDERSON", we were inside looking at Chris Christie stuff his face next to Fred Wilpon. 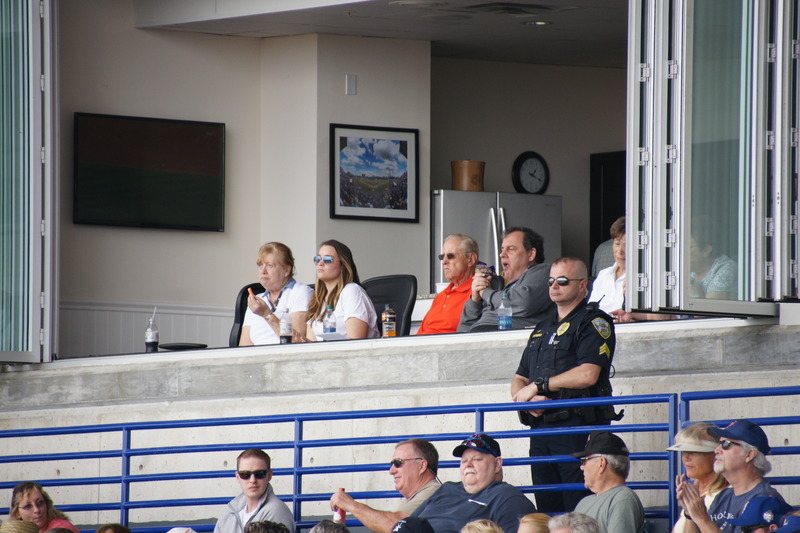 I tell you, I was like a kid at christmas. I know there was a baseball game and all, but I couldn't tell you shit other than deGrom pitched, and Cespedes batted. I spent the entire time soaking in the atmosphere and healing my broken soul. If you have never been to spring training, well....shame on you. 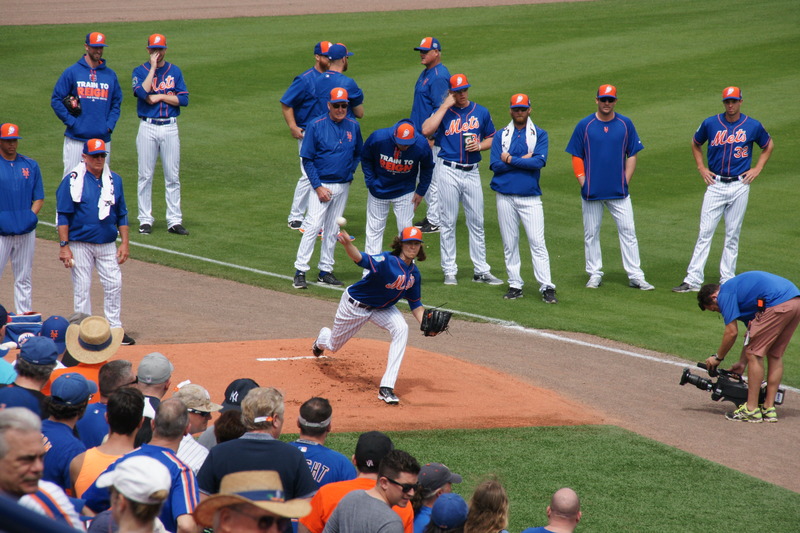 When the game ended, we left for the hotel and decided to hit the pool for a bit. I look off to the side and there is Wally Backman sitting there with his wife smoking and drinking. We played it cool and waited until we were leaving the pool. As we approached, I said "hello Mr. Backman", and he said hello back, so I walked over, shook his hand and asked if he minded taking a picture. He was very accommodating, and introduced me to his wife. He asked if we were going to games, etc, and then told us to go to the morning workouts if we wanted to get close to the players. 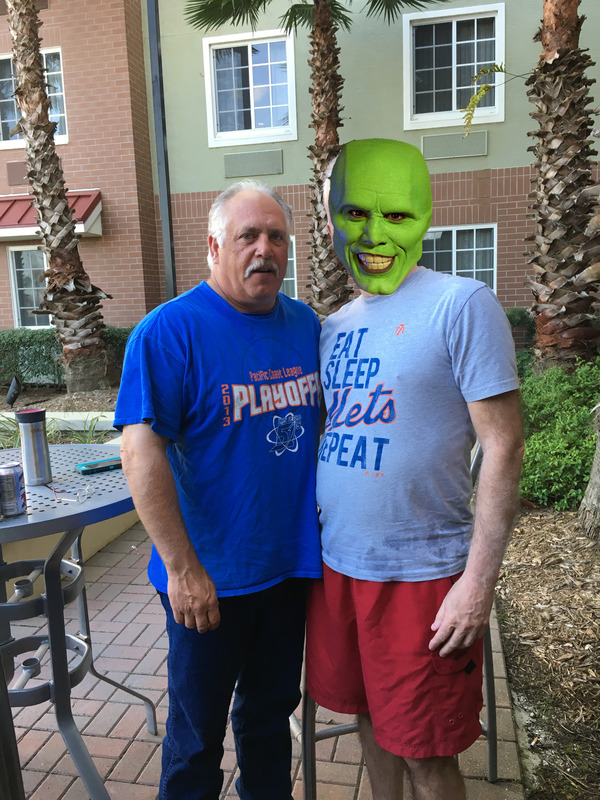 The next morning, at breakfast, Frank Viola (or his clone), is sitting two tables over. We left him alone, but my wife did run into him in the hallway later on. She said that he saw her Mets garb, and went out of his way to say hello. I, of course, missed the whole thing but no matter because we were on our way back to the morning workout. It was during this time that we met Ron Darling, David Wrongz, Addison Reed, and others as you saw on twitter. We then saw the Cardinals play the Mets with Thor on the mound. Watching Thor get ready for the game is worth the price of admission. The man truly is a God. 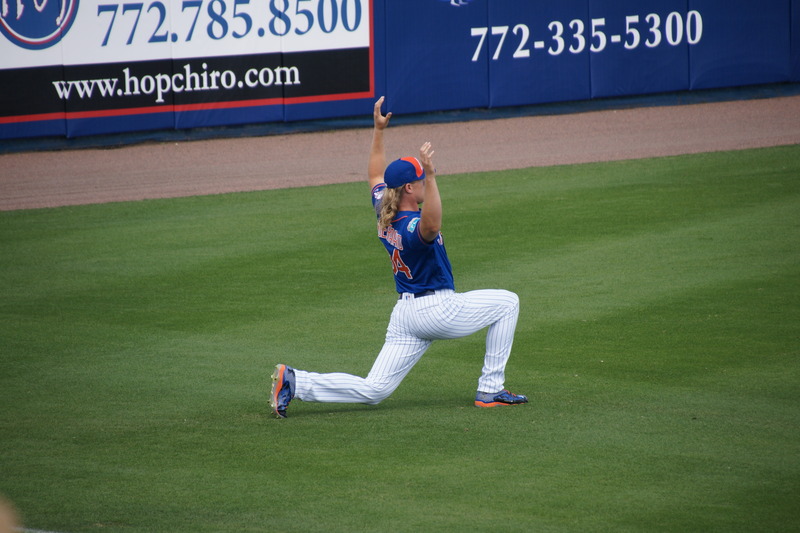 Here is DW being mobbed. My wife is in there somewhere... 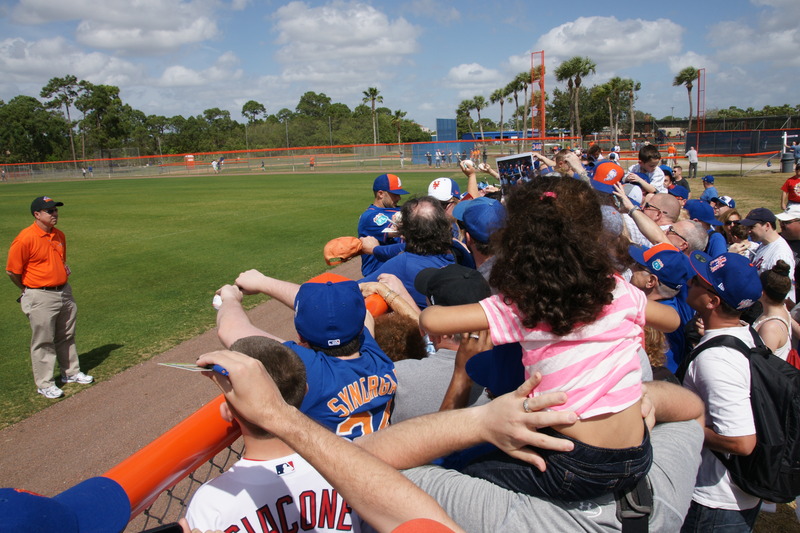 That evening, back at the pool, there is Wally again in the same spot, but this time Ray Ramirez is with him. They are laughing it up and having a good time, so we left them alone. I briefly toyed with the idea of asking Ray about my wife's knee but the sight of her wearing a boot around her neck scared me off. That night we went to eat at Duffy's where SNY had done a broadcast from the week prior. I asked our server about it and he said "oh yeah, I waited on one of the VIPs, some guy named Flores or something?" SMH.

The next morning, we went back to the workout, and this time got to meet Robles, Plawecki, Smoker (he was also staying at our hotel), and Blevins. I asked Jerry about the arm and he responded "the arm is great, thanks for asking". Robles and my wife made fast friends because she addressed him in spanish, but the crowd basically swallowed my wife again. She eventually came out of the pile with Robles, Smoker, and Blevins' autographs. She then spots Colon batting in the distance and points him out. People go over to look (he is pretty far away), but nearby is Kevin Plawecki so she goes over and spends quality time with him. I asked my wife how her knee was holding up and she says "what knee". 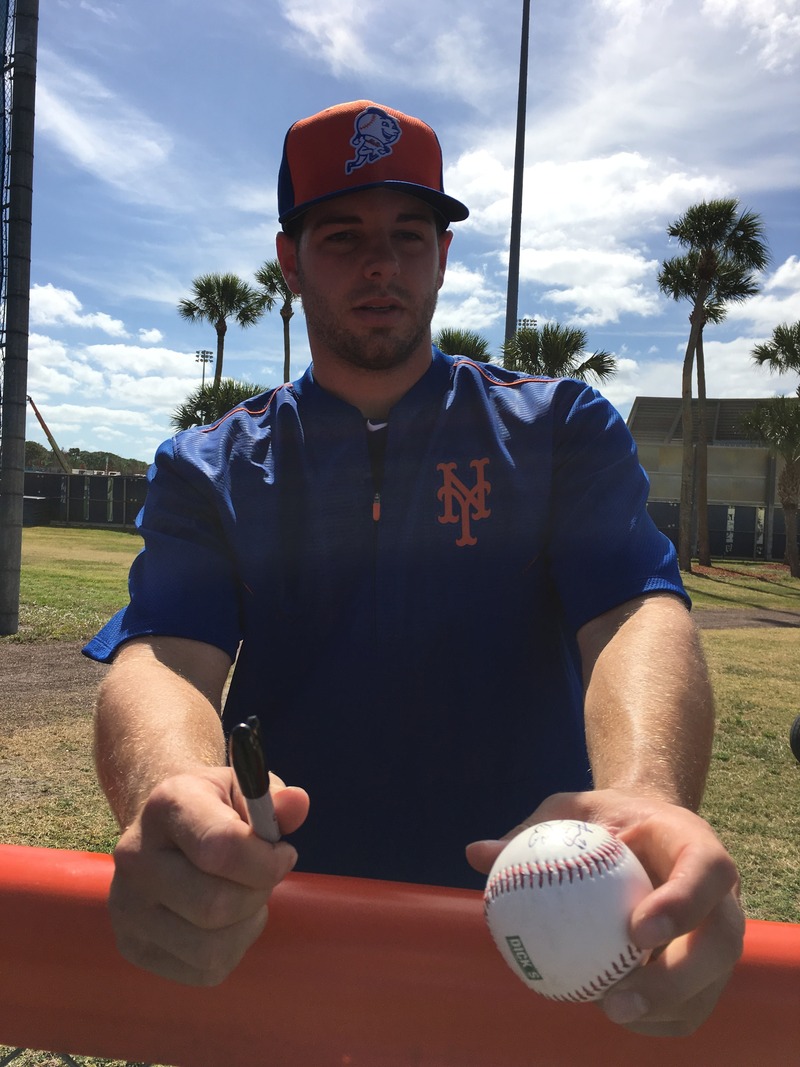 We eventually left to drive up to Space Coast stadium, where we saw Harper take strike 3 from Matz (twitter), and Murphy get a base hit, etc. That game was pretty boring, and there was no shade, so we left early for the long drive back to PSL.

All in all, the baseball part of this trip was extremely rewarding, entertaining, and any other nice things you can say. I am glad I went, even if Beltran once again gave me the slip. Fuck that guy. Cespedes is better. He certainly has a nicer horse he rode in on.

Here are Robles and Familia. The latter refused to acknowledge the fans, so TRAID. To be honest, Familia struck me as kind of dickish, but SSS. 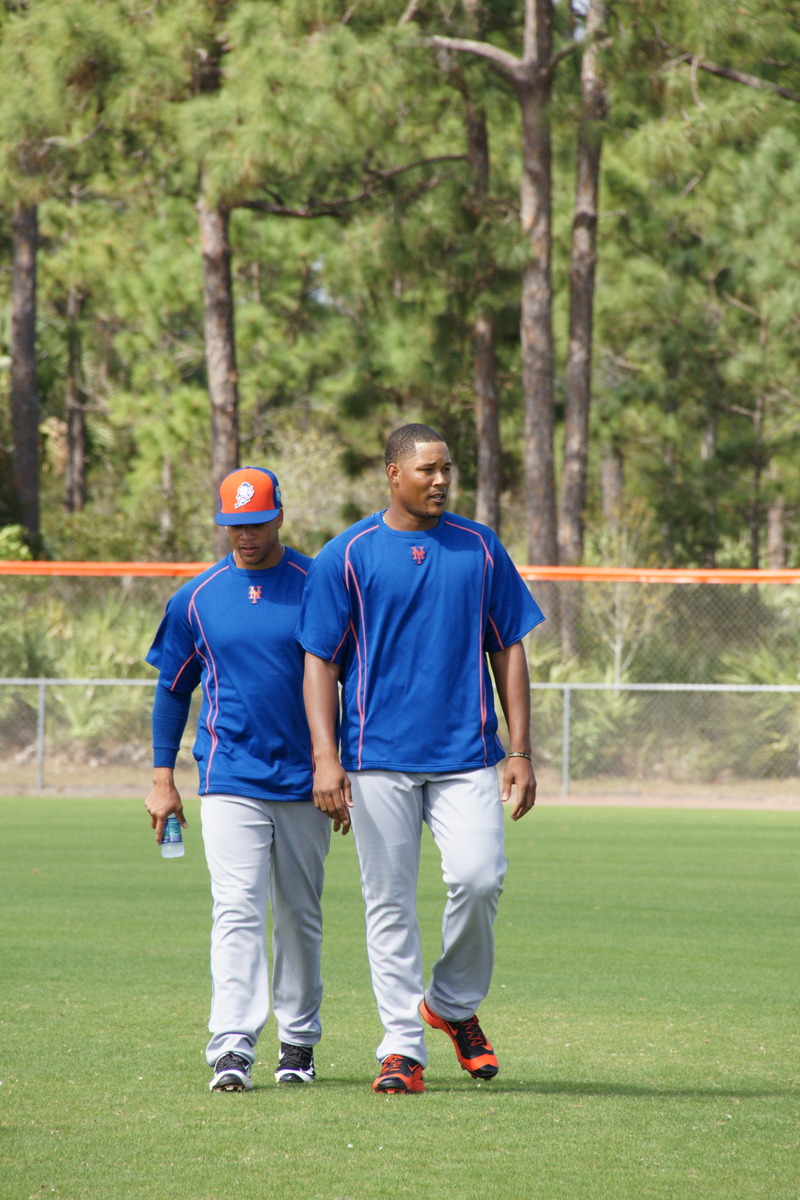 Finally, Jay Horwitz was on our return flight. I briefly chatted with him as we boarded, but respected his personal space. I am sure he wanted to get home as much as I did. At this time, I would like to make a motion for AA to organize a trip to PSL. The 7 Line does it, why can't we. HELLO HELLO MR. SAMOAN !!!!