Mets reliever Jim Henderson has been dominant to begin the season

The 33-year-old is perfect through his first three outings.

Share All sharing options for: Mets reliever Jim Henderson has been dominant to begin the season

The Mets’ season hasn’t gotten off to a fantastic start, but Jim Henderson’s has. Because of shoulder issues, the 33-year-old hadn’t pitched in a major league game since early in the 2014 season until this year. In his first three outings back in the big leagues, he has been perfect and—perhaps more importantly—looked dominant in the process.

Henderson has struck out seven of the nine batters that he has faced, or 77.8 percent of them. He’s generated swings-and-misses on 36.5 percent of his pitches. Those rates aren’t sustainable, but they stand out because they’re so ridiculously high.

When he was at his best for the Brewers in 2012 and 2013, Henderson’s four-seam fastball averaged 95.71 and 96.11 miles per hour, respectively, according to Brooks Baseball. He came out throwing very hard in his first appearance this year, averaging 95.77 miles per hour in his inning of work against the Royals in the Mets’ second game of the season. He didn’t throw quite that hard in his second and third outings, but he’s still averaged a respectable 94.85 miles per hour on the fastball. 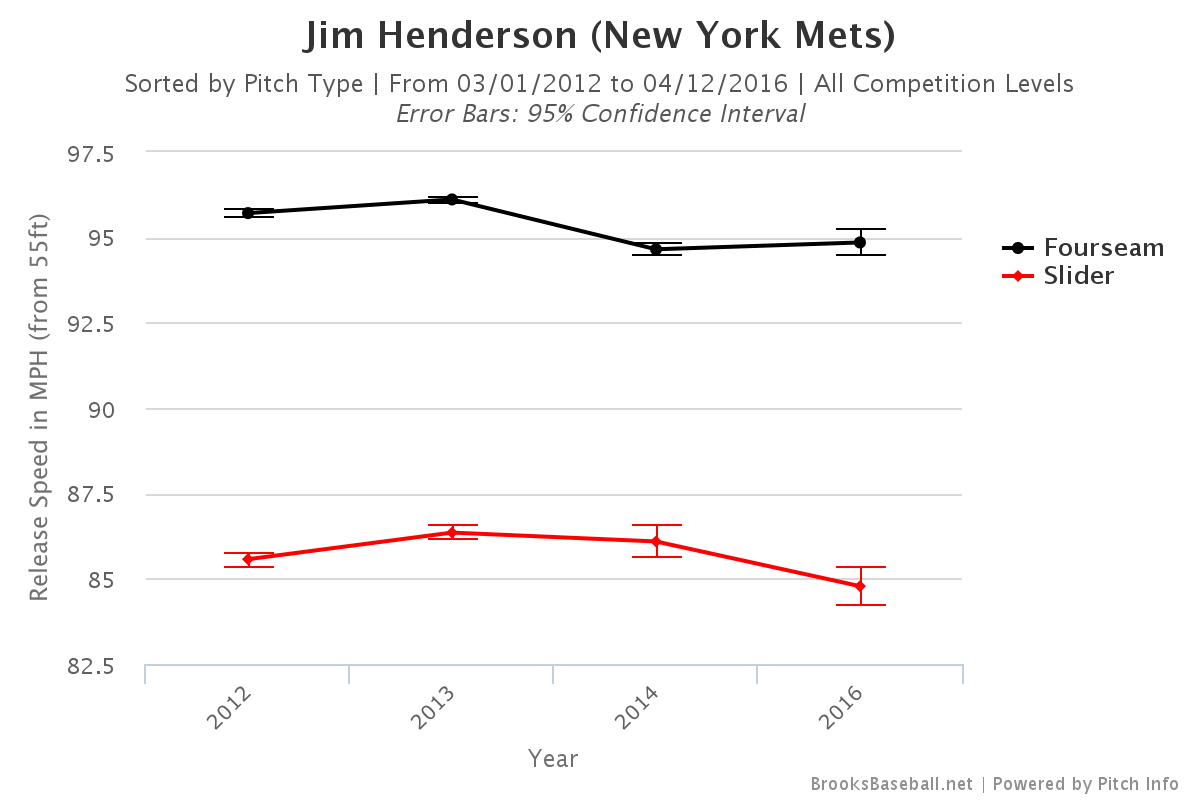 A two-pitch pitcher, Henderson throws a slider, too. Like the fastball, he’s throwing it at a pretty good velocity, but not quite as hard as he did in the past.

Both of Henderson’s pitches have made opposing batters swing and miss, though he has thrown a ton of fastballs and just a handful of sliders. Opponents have whiffed on 37.14 percent of his fastballs and two of his six sliders, or 33.33 percent.

Later in that inning, Henderson got Omar Infante to strike out, too. He started him off with a first-pitch slider that Infante took for a strike. He followed that up with this slider, and Infante swung and missed.

Up 0-2 in the count, Henderson went upstairs with a fastball, which Infante fouled off. But he came right back with this up-and-away fastball, and Infante flailed at it to strike out and end the inning.

Clearly, Henderson isn’t going to be as dominant as he’s been in his first three outings all season, but the early returns are very encouraging. For a guy who hadn’t pitched in a major league game in nearly two years and signed a minor league deal over the offseason, Henderson’s stuff looks about as good as anyone could reasonably expect.

If he keeps getting swing-and-misses and strikeouts at above-average rates, the Mets might have found a great late-inning reliever at a steal over the offseason. And if all else fails, Henderson already provided inspiration for Muppet Avenue.