The Mets won a game with great pitching and hitting performances.

When Steven Matz took the mound for the Mets today in the bottom of the first inning in Cleveland, he had 37.80 ERA and a three-run lead. By the time his seven-inning start was done, he had a 7.27 ERA and the Mets were up by six. 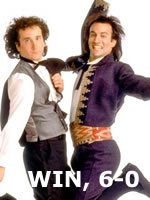 Early-season stats have a way of looking strange, particularly for pitchers, and Matz’s ERA was and still is inflated because he happened to have a terrible first start. But his second start was the complete opposite of terrible.

In seven scoreless innings, Matz struck out nine, walked two, and allowed just three hits. He threw 94 pitches, 62 of which were strikes, and he generated 14 swinging strikes—a very good 14.9% rate. He threw plenty of fastballs, but he mixed in his curve and slider very effectively and threw a handful of changeups. There shouldn't have been any doubts about Matz's ability after the first start, but his start today should erase any such concerns.

Matz wasn't the only Met to have a great day, either. Michael Conforto continued his excellent start to the season with a 2-for-3 day with a couple of doubles, two runs scored, and two runs batted in. He's now hitting .313/.421/.563 on the season, and while it'll take a while for all stats to level out in the coming weeks of the season, it's not hard to imagine Conforto maintaining something close to that line.

It was Conforto that drove in the Mets' first run with the first of his doubles in the top of the first inning. Lucas Duda hit a hard single to drive in the Mets' second and third runs later in that inning.

In the third, Curtis Granderson hit a fly ball to left center, but Indians center fielder Rajai Davis lost it in the sun and it fell for a triple. Asdrubal Cabrera, who hit second today as David Wright got a scheduled day off, top advantage of that two-out gift by dropping down a perfect bunt towards third base to drive in Granderson with an infield single. Conforto doubled again to score Cabrera, and Yoenis Cespedes hit a double—on another ball that Rajai Davis could have caught but lost in the sun—to score Conforto. And they did all of that damage with Corey Kluber pitching for the Indians.

The Mets didn't score again after that, but one other hit of note was Kevin Plawecki's extremely long single to left field that bounced off the upper part of Cleveland's very tall left field fence.

When Matz departed, the Mets' bullpen picked up where he left off. Hansel Robles worked a perfect eighth inning with a pair of strikeouts. Jerry Blevins struck out Jason Kipnis and Francisco Lindor to begin the top of the ninth, though he only got credit for pitching one-third of an inning as Lindor reached first when Plawecki couldn't handle the third strike. Addison Reed took over for Blevins, and he struck out Mike Napoli and Carlos Santana to end the game.

This was the sort of game you spent the winter dreaming about. Mets pitchers were dominant, their offense was very good, and there was never a worry that they would lose the game. 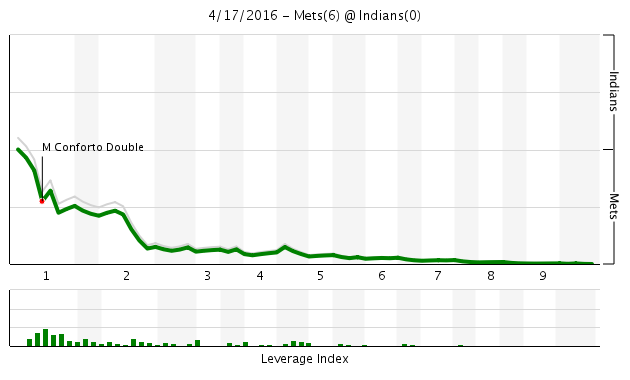