Howdy, Mets fans! This Week In SNY is here with all of the best moments from the second week of Mets baseball on SNY and PIX11. Let's get right to the highlights!

With Yale product Craig Breslow on the mound for the Marlins, Gary, Keith, and Ron got into an in-depth discussion about Ivy League universities and college in general.

Gary: Craig Breslow, who I believe is the only current major leaguer with degrees in molecular biophysics and biochemistry.

Gary: Molecular biophysics, I'm not even sure what that is.

The conversation continued on with Gary telling how it's the football players that go up the hill at Columbia, then shifted to talk about organic chemistry and Keith's lack of a college education.

Ron: Required in your freshman year because it's how they...

While we know Ron is a fellow Yalie and Gary's a Columbia grad, Keith went to the university of St. Louis Cardinals baseball.

Keith: I had to talk my chemistry teacher in high school not to give me a D.

Keith: I had no interest in chemistry.

Keith really made it known that he had no interest whatsoever in taking either biology or chemistry.

Gary: The periodic table was not your thing?

Keith: I had no interest!

Keith had to work hard for that C-. Gary surmised that Keith would've been a history major had he gone to college, at which point Ron brought up the fact that Keith is a Civil War buff. I wonder what you have to do to become a buff?

Gary closed the conversation by guessing that if Keith had not succeeded as a ballplayer, he would have become a crazy Civil War history professor like he once had at Columbia. Frankly, this sounds about right to us.

Last week, we mentioned that Keith worked a game that he wasn't supposed to work. Well, that mistake was quickly rectified.

Gary: The problems with the schedule have earned Keith a day off tomorrow!

Keith: Yes, I've got the day off tomorrow because I worked Sunday when I wasn't supposed to work. And no one told me!

Gary: We should all be able to make our schedule like that.

Keith: You guys are supposed to have my back.

Gary: Well they say when you work for yourself you can make your own schedule.

Gary: Not aware we were on SportsKeith New York!

Gary shouldn't be surprised given that this has been the logo of the network since 2006:

Gary opened up the third inning reading a promo for MetsBlog with Matthew Cerrone. According to the promo, Cerrone will catch up with former Met Gregg Jefferies, who is a "favorite" of Keith's.

Keith: Gregg Jefferies, I wonder what he's up to today!

Keith: I believe he married a gal from Kentucky.

Gary and Keith came close to catching a Travis d'Arnaud foul ball thanks to the big windows of Progressive Field's press box. Then they said hello to the camera!

Keith: You can see all my chins now!

We all know that Keith enjoys preaching to a group of people during games, most often saying something to the benefit of "all you kids out there." After Alejandro De Aza homered to dead center, SNY showed Cody Anderson's reaction and from what we could tell, it was laced with profanity.

Keith: Oh, he's a little hot! All you lip readers out there, cover your eyes.

SNY opened the bottom of the sixth by showing off this sign somebody brought with them:

Gary: You look a little different than the last time I saw you.

Gary: Well you certainly know how to grab the bull by the horns!

A job well done on the photoshopping by those fans out in Cleveland. Are they Amazin' Avenue readers?

With the Mets losing late in Saturday's game, Gary and Keith spent part of the bottom of the eighth inning talking about condiments thanks to this guy's appearance.

Condiments and their correct usage is always a rousing conversation on the internet. Let's see what Gary and Keith had to say on the subject.

Gary: Is that a hot dog with ketchup sitting in the stands?

Keith: There's a mustard one out there, too.

Gary: Don't let me get started on the whole mustard and ketchup on the hot dog thing. It gets some people so upset if you disparage their favorite condiment.

Keith: Well, I was the one guy, I don't like relish.

Gary: How about sauerkraut? New York is a mustard and sauerkraut town.

Keith: As a kid, I did not like sauerkraut. As an adult, I can deal with it.

SNY's cameras eventually trained in on Mr. Mustard, enjoying the game with some of his bros out in the stands. Look at all the fun they're having.

The fourth inning of Sunday's game opened up with some facts about the city of Cleveland:

When Gary mentioned that fourth fact, the way he said it really piqued Keith's interest.

Gary: And this is where the red light began. 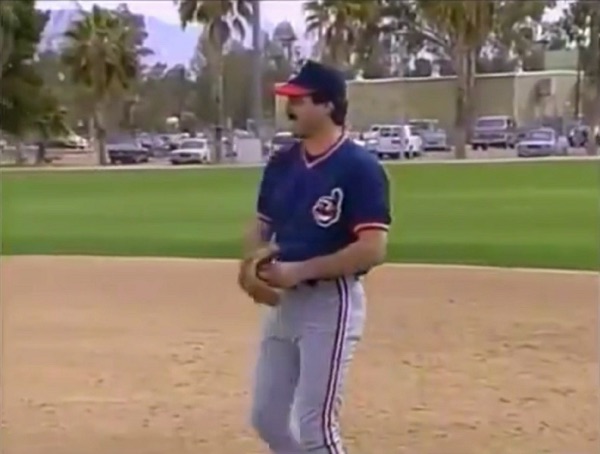 Hey, look who it is! SNY threw it back with a great little clip of Keith as a member of the Cleveland Indians during spring training 1990. Keith didn't have too many fond memories of his year in Cleveland, mostly because he was injured multiple times.

Keith: I was finished. Onto another topic, please. Ross Detwiler! Perfect, great segue out of there!

Of course, it was Detwiler who Keith hilariously called a "rockhead" in 2012 when he was a member of the Nationals. The conversation quickly went back to Keith's Cleveland tenure.

It's time for Nitpicking with TWISNY! We head to the bottom of the eighth inning with one out and up to the plate comes Juan Uribe for the Indians.

But wait, that's not Juan Uribe! We all know what he looks like. We also know he doesn't bat left handed. Plus, how could he have popped out in the eighth when he's currently batting in the eighth? You're not fooling us, SNY. We're guessing that's Jose Ramirez. This has been Nitpicking with TWISNY.

We all know Gary, Keith, Ron, and Steve, but SNY viewers got to meet a new member of the SNY crew on Monday night. Introducing the SNY Fail Whale!

That was bizarre. Where did he come from? Has he always been around? Will we ever see this new member of the crew again? We'll be sure to keep an eye out. In the meantime, vote in our totally meaningless TWISNY Poll at the bottom!

Over the 11 seasons of SNY broadcasts, we here at TWISNY have come to notice that Ron Darling will not accept your compliments. Ever. So while Gary and Ron were discussing the Dickey for d'Arnaud and Syndergaard trade Monday evening, they had this exchange which brought out our friend Bashful Ronnie:

Gary: Will that go down as the greatest trade in Mets history? Syndergaard and d'Arnaud for R.A. Dickey?

Ron: It's early but boy, is it looking that way. Yeah, it does.

Bashful Ronnie: Nah, no no don't say that. They ended up with HoJo.

That's all for week two of This Week in SNY! Big thanks go out to Chris McShane and Lukas Vlahos for keeping watchful eyes and ears!

Remember, if you're watching Mets games on SNY and you witness a moment that should be featured in This Week in SNY, send us an email to TWISNY@grission.com or tweet it to us (@AmazinAvenue or @_mistermet) with the hashtag #TWISNY!

This Week In SNY was created by former Amazin' Avenue contributor James Kannengieser. You can read all of his entries here. We hope you enjoy this reboot!