Mets vs. Phillies recap: Eleven-inning loss puts the Mets back at .500

The Mets took a slim lead late into the game but ultimately lost in extras.

Share All sharing options for: Mets vs. Phillies recap: Eleven-inning loss puts the Mets back at .500

The Mets had an opportunity to sweep the Phillies last night, but they came up short in eleven innings. Philadelphia scored the game-winning run on a two-out infield hit, which came after a wild pitch that advanced runners to second and third, in the bottom of the eleventh. 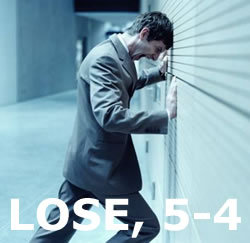 Both teams first got on the board in the second inning. Asdrubal Cabrera hit what appeared to be a three-run home run in the top of the inning. But thanks to an awkward setup on top of the right field fence at Citizens Bank Park—and a fan who reached just over the railing that sits atop the wall and grazed the ball before it bounced off the top of the wall and into the stands—the hit was ruled a double upon replay review. That gave the Mets runners on second and third, but they scored just once, as Jeremy Hellickson threw a wild pitch to bring home Neil Walker.

In the bottom of the inning, Bartolo Colon, who had a decent start overall, gave up a two-run home run to Freddy Galvis. Off the bat, that home run looked like a routine fly ball to center field, but as Yoenis Cespedes kept going back on it, the ball kept going, too, well over the fence.

The Mets fell behind briefly in the bottom of the fourth when Colon gave up a sacrifice fly to David Lough, but Cespedes hit a solo home run to tie the game in the top of the fifth. Lucas Duda came up next and hit a home run of his own to put the Mets ahead 4-3.

That was the end of the Mets’ scoring, and unfortunately, it wasn’t quite enough for them to win the game. Jerry Blevins and Addison Reed combined to give up a tying run in the seventh. A Peter Bourjos single against Reed plated Lough, who had doubled against Blevins earlier in the inning.

After a couple of scoreless innings from Antonio Bastardo and one from Jim Henderson, Hansel Robles got into trouble in the bottom of the eleventh by allowing a one-out double. After an intentional walk, he threw a wild pitch that moved the runners to second and third. That wild pitch made the count 1-0 on Emmanuel Burriss, and something strange happened: Robles and Travis d'Arnaud proceeded to throw an intentional ball as Terry Collins and Dan Warthen screamed from the dugout that they did not want Burriss intentionally walked. So d'Arnaud got back down behind the plate, and Robles got Burris out on a fly ball to very shallow center field. Despite escaping that very unique scenario, Robles ultimately caved, as Bourjos hit an infield single to David Wright at third base that scored the game-winning run.

That would have been a tough play for any third baseman to make, but it was a rough night for Wright and Michael Conforto. Those two combined to go 0-for-11 with seven strikeouts. Curtis Granderson and Cespedes had a couple of hits, Duda went 2-for-3 with the aforementioned home run and a double, and Neil Walker went 4-for-5 and extended his walk-less streak to begin the season.

On top of those performances, d’Arnaud looked great at the plate, as he went 2-for-5 and hit the ball hard even when he made outs. The Mets’ lineup came to life over the past six games, but d’Arnaud was the last regular standing who hadn’t gotten in on the action just yet. In the long run, he figures to hit well enough to force his way out of the eight spot in the Mets’ well-rounded lineup.

There’s no doubt that losing games to the Phillies is frustrating given the context of the season, but the Mets will have an opportunity to beat up on another division rival in Atlanta starting tomorrow night as they look to get back above .500. 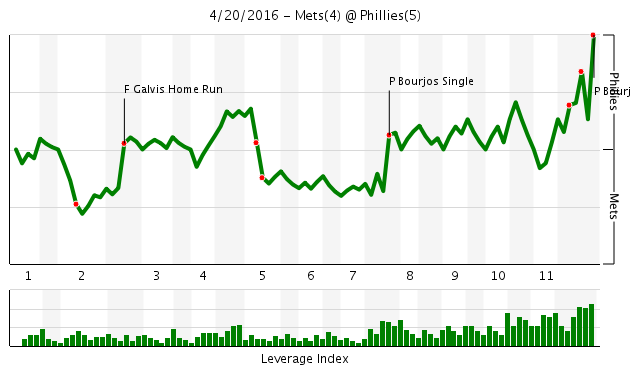