Everyone got in on the fun on Saturday.

The Mets earned another victory Saturday night by getting key two-out RBIs from David Wright and Asdrubal Cabrera. That was plenty for Steven Matz, who followed up a dominant start with a perfectly decent one. He went six-and-a-third innings, struck out eight, and gave up two runs. 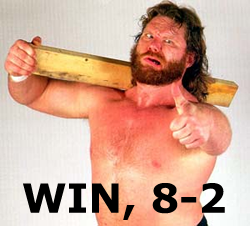 Curtis Granderson continued his hot hitting in the first when he led off against Jhoulys Chacin with a single. After a Wright strikeout, Conforto hit a single of his own, moving Granderson to third. A Lucas Duda sacrifice fly got the Mets on the board. Michael Conforto then stole his first base of the year, and Neil Walker walked for the first time this season. Conforto came home when Freddie Freeman flat-out missed an Asdrubal Cabrera grounder up the line making it 2-0 Mets after the inning was over.

Steven Matz looked dominant in the bottom half of the inning, retiring the Braves in order. After Nick Markakis grounded out, Daniel Castro and Freddie Freeman both struck out against the lefty.

In the second and the third, however, Matz found himself in some trouble. In the second, with runners on second and third and two outs, Terry Collins decided against intentionally walking eighth-place hitter Drew Stubbs. He allowed Matz to go after him, and Matz was able to get out of trouble with a strikeout. The following inning, however, Matz was unable to escape unscathed when he gave up a Freddie Freeman double with runners on first and second, which cut the Mets' lead to 2-1.

The Mets got the run back and then some in the fourth and seventh innings. David Wright hit his first of two doubles on the night, driving in Travis d'Arnaud and Curtis Granderson with two out making it 4-1 in the fourth. Asdrubal Cabrera extended the lead in the seventh with a two-out RBI single.

Matz had been pitching into and out of trouble all night and was pulled with one out in the seventh when Nick Markakis drove in Stubbs to cut the lead to 5-2.

After both starters were out of the game it became a tale of two very different bullpens. Hansel Robles, Addison Reed, and Logan Verrett shut down the Braves for the final innings, while the Mets' offense exploded off the Braves bullpen in the ninth. Walker and Cabrera hit back-to-back home runs, and Juan Lagares tripled to bring home Travis d'Arnaud to put the game away and make it an 8-2 final score.