Mets vs. Braves recap: deGrom returns, Familia holds on to complete the sweep

Michael Conforto and Lucas Duda helped provide the punch to give the Mets the win.

Share All sharing options for: Mets vs. Braves recap: deGrom returns, Familia holds on to complete the sweep

Jacob deGrom was exactly as good as the Mets needed him to be today in their 3-2 win. The new dad, in his first start since April 8, wasn't at his sharpest by any means. But deGrom at 75% is still a darn good pitcher, and this afternoon, he threw 82 pitches, 59 for strikes, over 5.2 innings. He allowed eights hits—the Mets allowed 12 in  total—but did a good job of scattering them and never truly found himself in major trouble. Michael Conforto provided most of the punch on the other end against Aaron Blair and the Braves' bullpen, and the Mets left Atlanta with a sweep. 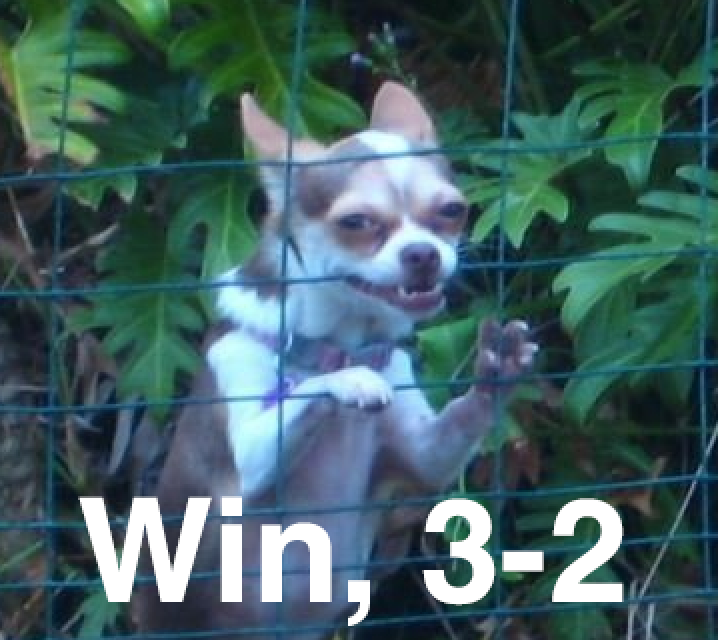 The Mets got on the board early in the game, as Curtis Granderson and Asdrubal Cabrera opened up with back-to-back base hits. Conforto hit a sacrifice fly to left to start the scoring, though that's all the Mets got early in the game. Lucas Duda struck out as Cabrera was caught stealing to end the inning. The first inning was a bit worrisome for deGrom, who gave up hits to Daniel Castro and Adonis Garcia, but ultimately got out of it.

Not much happened between that and the bottom of the fifth, when the Braves' bats came alive. Jace Peterson hit a single, then was moved over by a Blair bunt. Nick Markakis continued his excellent start with a base hit that drove Peterson in and tied the game. Daniel Castro hit an infield single, but deGrom induced a ground out by Freddie Freeman to end the inning.

In the top of the sixth, the combo of Granderson, Cabrera, and Conforto did it again. Granderson walked and moved to third on a single. Then, Conforto stepped up and hit a rocket to right field that took a hop up over the wall and gave the Mets a 2-1 lead. Lucas Duda's sacrifice fly gave the Mets a 3-1 lead, one that they would not relinquish thanks to a strong middle relief showing.

In the ninth, Jeurys Familia continued his early season swoon but ultimately held on. Ex-Met Kelly Johnson hit a single to lead off and then advanced to second on a mental mistake by Cabrera. Erick Aybar hit a sharp ground ball to the Met shortstop, who got the out at first instead of getting the lead runner he seemingly would have had. Another ex-Met, this time Jeff Francoeur, hit a single to bring it to 3-2. Markakis followed it with a single, but Familia got Castro to ground out to end the game. The Mets leave Atlanta with a sweep, and they return home tomorrow after a 7-2 road trip. 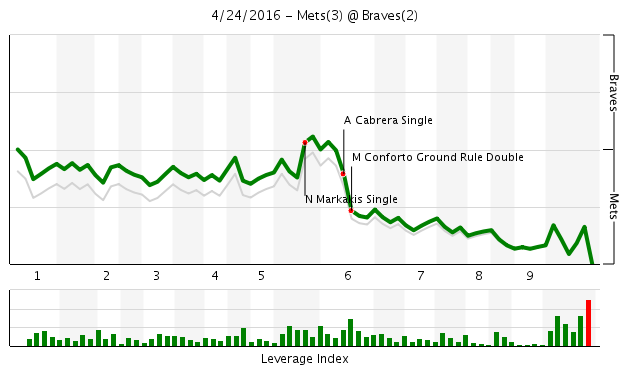