Baseball is a game of numbers. New York had enough of the right ones by the end of Monday's 5-3 win.

Share All sharing options for: Mets vs. Reds recap: Mets continue to have Reds' number in Monday night win

Yes, early season numbers are often wonky. But we can hardly help ourselves when we see shiny new numbers, can we? Let's take a look at some of the ones that stand out after Monday's 5-3 win. 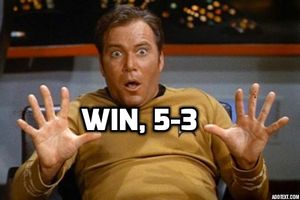