The Mets fell to the Giants 6-1 in their lowest-scoring game in nearly three weeks.

The Mets had scored two or more runs every game since April 12 until Sunday afternoon at Citi Field, when Madison Bumgarner and the Giants' bullpen held them to just a single run. The Mets gave up six runs, and the loss ended their eight-game winning streak. 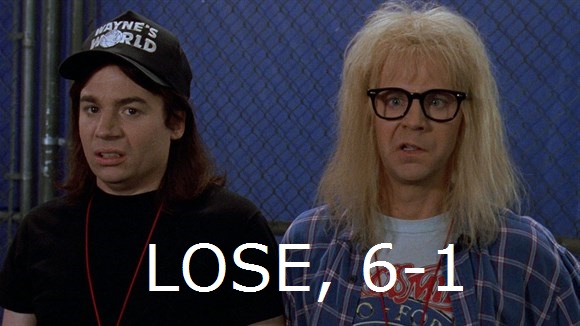 The game was played under very San Francisco-like conditions: chilly with light rain falling. The Giants seemed to thrive under such conditions. They never trailed and looked much more like a winning baseball team than they had on Friday or Saturday.

A huge part of that was their starting pitcher. After two days of starting veterans on the wrong side of 30, Bumgarner came in and shut down the Mets down for six innings. Three different times during his start, the Mets had runners in scoring position, but they never scored.

For the Mets, Noah Syndergaard looked human for the first time this season, failing to last six innings and giving up his first home run of the season, an opposite-field shot to Hunter Pence in the fourth inning. Aside from the fourth, Syndergaard actually pitched reasonably well, as he walked two and struck out six. Syndergaard's inability to hold runners on effectively was on display here, as the Giants stole three bases against him this afternoon. He exited with two runners on in the top of the sixth, and one of those runners came in to score after Hansel Robles took over. That marked the second day in a row that Robles allowed inherited runners to score.

The amazing thing about the Giants' offense against Syndergaard is that it all started when the Giants sent Buster Posey with one out and runners on the corners. That allowed the ground ball that Belt hit to to second base to be a run-scoring fielder's choice rather than an inning-ending double play. The next batter, Pence, was the difference maker in the game.

In the seventh inning, Antonio Bastardo walked Kelby Tomlinson to start the inning. After stealing second, Tomlinson scored on Angel Pagan's single with two outs. Pagan was thrown out after he was hurt trying to stretch the hit to a double to end the sixth.

The Mets showed a spark in the bottom of the seventh inning, as Juan Lagares greeted Derek Law with a fan-interference double and then scored when David Wright singled him in. That was the extent of the Mets' offensive production, sadly, as two singles in the eighth and a Lagares walk in the ninth proved fruitless.

The Giants scored their final run in the seventh, as Buster Posey hit a 392-foot solo home run to left center against Logan Verrett.

This wasn't a pretty game by any means, but the Mets took two of three from the Giants and are poised to have better weather and will spend the next three days playing the Braves. 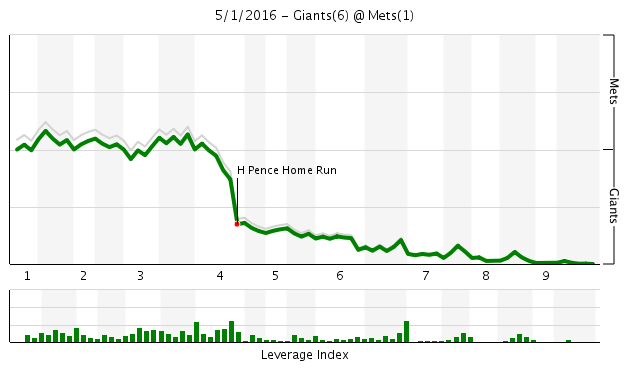