Steven Matz was great in his return to the rotation, and Michael Conforto hit the eventual game-winning home run.

Share All sharing options for: Mets vs. Brewers recap: Matz's strikeouts and Conforto's home run make for a perfect brew

Steven Matz and the Mets were brewing on Friday night in Queens. Coming off their last two games against the Nationals, both of which were ugly losses, a win against Milwaukee was a sight for sore eyes. 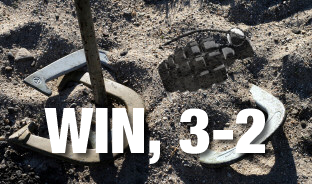 When your team is good and its opponent is bad, you’d always prefer an easy win, perhaps one in which your team never trails. The Mets didn’t go that route tonight, but they won 3-2, which is a perfectly acceptable outcome. And aside from the lack of more runs for the good guys, the game had a bunch of things you’d want in any given game.

Steven Matz has undoubtedly been the Mets’ second-best starter behind Noah Syndergaard, and he looked every bit the part in this start. It was his first one after he was skipped in Colorado last Saturday because of elbow soreness. The diagnosis on his left arm was good, and Matz was just what the doctor ordered for the Mets on Friday.

In seven innings, Matz allowed just two runs on three hits, and he struck out eight without walking anyone. He needed only 88 pitches to do that and would have probably started the eighth inning in any game other than his first one back after an elbow scare. Of those 88 pitches, 65 were strikes, and 13 were swinging strikes—a well-above-average rate of 14.8 percent.

Matz gave up both of those runs in the first inning, as Chris Carter hit a home run to center with Jonathan Villar on third base. That was the entirety of the Brewers’ offense in the game, though.

From there, not much was going on at the plate for the Mets, but Asdrubal Cabrera led off the sixth with a single, and Michael Conforto followed that up with a home run to left field that cleared the fence by just a bit.

Both Carlos Torres and Chris Capuano, former Mets from the past few years, made appearances out of the Brewers’ bullpen. The Mets weren’t able to score against either one. But the Mets’ relievers were just as good, as Addison Reed threw a perfect eighth and Jeurys Familia threw a perfect ninth, each pitcher notching one strikeout in the process.

Weather permitting—and the forecast looks decent right now—the Mets and Brewers will play again at 4:10 PM on Saturday, and the Mets will have the opportunity to win a series in its second game. That’d be a nice step forward as they distance themselves from the series against the Nationals at home while approaching their three-game series against the Nationals on Washington, which begins on Monday. 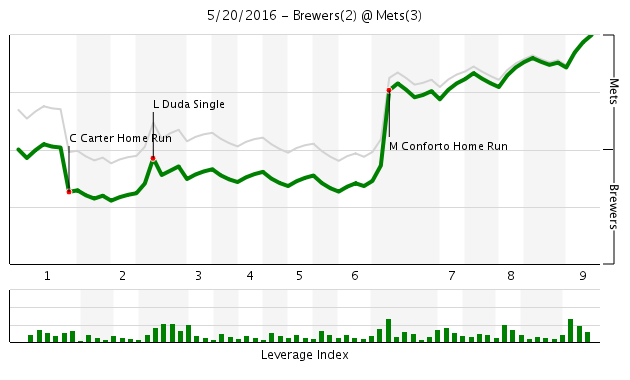