Share All sharing options for: Mets vs. Dodgers Recap: Granderson beats the Dodgers after Familia falters

After Jeurys Familia blew a four-run lead, the Mets walked off on the Dodgers on a home run from Curtis Granderson, winning 6-5. Jacob deGrom struck out seven and showed his best velocity of the season, and the Met offense beat up top Dodgers prospect Julio Urias in his major league debut. David Wright and Juan Lagares also homered. 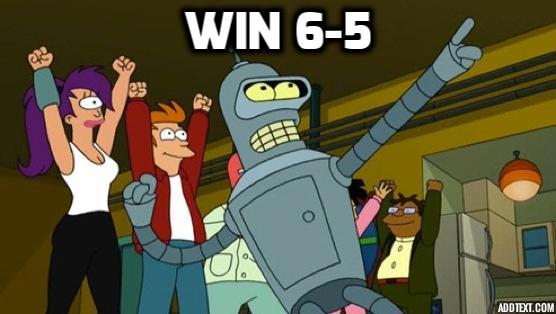 deGrom flashed arguably his best stuff of the season in the first inning. After a leadoff walk to Chase Utley, he struck out Corey Seager and Justin Turner, showcasing a 96 MPH fastball up in the zone. While his command was spotty, this is the kind of velocity that elevated deGrom to the echelon of elite pitchers last season.

In the bottom half of the first, the Mets squared off against 19-year-old super prospect Julio Urias. He was clearly a bit over-amped, missing up and down and struggling to finish his pitches. Neil Walker knocked in the first run with a double, and Juan Lagares knocked in another two runs with a single. The Mets sent eight men to the plate and forced 36 pitches out of the cautiously-handled youngster.

Chris Hatcher relieved Urias in the fourth and surrendered a home run to David Wright. A vintage blast to right center field, Wright's homer was the third homer in as many games—coincidentally the longest such streak for an MLB player pronounced dead earlier in the season. Juan Lagares added his own home run off Joe Blanton in the next inning, his first home run of the year.

deGrom, meanwhile, continued to fight his control. He walked three in his seven innings of work. On the bright side, deGrom held his velocity into the fourth inning, later than we've seen from him this season, and surrendered only one run after the Dodgers loaded the bases on a walk, broken bat single, and a fielding error on deGrom in the third. Unsurprisingly, Chase Utley drove in the run on a sac fly.

deGrom departed in the eighth, as he was relieved by Jerry Blevins. He struck out Utley before surrendering a single to Seager, at which point Addison Reed entered the game. Reed got away with an obvious balk, making a quick pitch with a runner on base, but induced a ground ball double play from Justin Turner to end the inning.

Terry Collins made a somewhat puzzling, though totally in character, move and brought in Jeurys Familia with a four-run lead in the ninth. Familia's night started off unlucky, as he allowed a dink to Adrian Gonzalez into left field and an infield single to Howie Kendrick. He then struck out Joc Pederson before Yaisel Puig singled to left to load the bases. Yasmani Grandal walked to cut the Mets' lead to three, but Familia got Trayce Thompson swinging to put the Dodgers down to their last out.

Of course, the last obstacle was Utley, and true to form, he blasted a three-run double to right-center to tie the game at five. Familia struck out Corey Seager to end the inning, but the Dodgers had tied the game and Met fans were probably suffering flashbacks to Utley's days with the Phillies.

Thankfully, Curtis Granderson came to the rescue. After taking a huge hack on Pedro Baez's first offering in the bottom of the ninth, Granderson launched an absolute moon shot on the next offering, tucking a fly ball just inside the foul pole down the right field line to give the Mets their second walk-off win of the season.

The win and the Nationals' loss to the Cardinals pushed the Mets percentage points ahead of Washington for first place in the division. Noah Syndergaard opposes Kenta Maeda, who he took deep twice in LA, on Saturday night.