Mets vs. Padres recap: A near no-hitter and a late rally in late night

Share All sharing options for: Mets vs. Padres recap: A near no-hitter and a late rally in late night

The Mets fell to the Padres 5-3 last night, despite the best efforts of the top of the lineup, who made a valiant effort in the ninth inning. The combination of the Padres getting excellent starting pitching, Jacob deGrom offering up lots of hard-hit balls, and the Mets' bats going cold for the first eight innings proved too much to overcome. 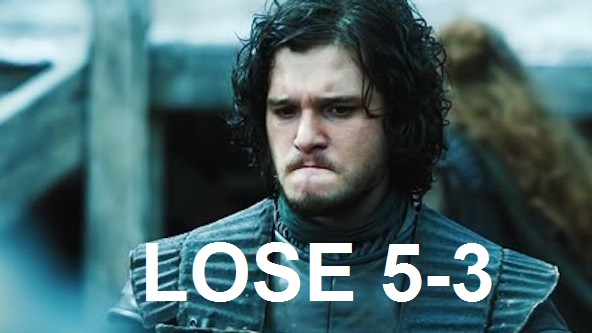 deGrom started for the Mets and did not look great. It seemed like every batter that made contact against him was making hard contact, leading to a short outing of five innings with only two strikeouts, along with eight hits, a walk, and three earned runs.

The first of those earned runs came on a Wil Myers home run in the first inning. deGrom's velocity started out in the 94-95 range, but quickly settled back into the low 90s, where we've seen him through much of this early season. The combination of decreased velocity and ineffectiveness of his secondary pitches led to a seemingly endless succession of hard-hit balls.

All of this was compounded by the fact that San Diego starter Colin Rea was mowing down the Mets with ease. Aside from a first-inning walk to David Wright, Rea didn't allow a baserunner until the seventh inning, no-hitting the Mets through 6.2 innings. While he only struck out five over eight-plus innings, his stuff was keeping Mets hitters off balance, rolling over lots of balls to the infield or hitting weak fly balls.

The one hitter who seemed to have Rea's number was Curtis Granderson, who struck a well-hit ball to left center that was amazingly run down by Jon Jay, as well as a shot up the middle that was snagged by a shifting Jemile Weeks.

Rea helped his own cause in the second, singling in Derek Norris to take a 2-0 lead. Next inning, a walk to Brett Wallace, a single to Melvin Upton, and a double by Alexei Ramirez led to another run. deGrom was lucky that Upton made a poor baserunning decision, which led to him being caught in a rundown between third and home.

deGrom eventually settled down a bit, not allowing more than a single in the fourth or fifth inning, but was pulled for a pinch hitting Alejandro de Aza in the top of the sixth, who promptly struck out. It was that type of night for the Mets.

Logan Verrett replaced deGrom, and served up a home run to Derek Norris, a single to Jemile Weeks, and a double to Jon Jay, which led to two runs in the sixth. Verrett looked much better in the seventh, where he set down the side in order. Hansel Robles worked a scoreless eighth.

In the top of the ninth, Granderson finally made good on his hard contact all night, and socked a home run to knock Rea out of the game and break up the shutout. Rea was relieved by Brad Hand, who walked Wright and allowed a two-run shot by Yoenis Cespedes to bring the Mets within two with one out.

Fernando Rodney entered the game after the Cespedes home run and locked down the win for the Padres, inducing fly balls from Lucas Duda and Neil Walker.

Noah Syndergaard and the Mets' bats hope to have a better showing at Petco Park tonight at 10:30 PM. 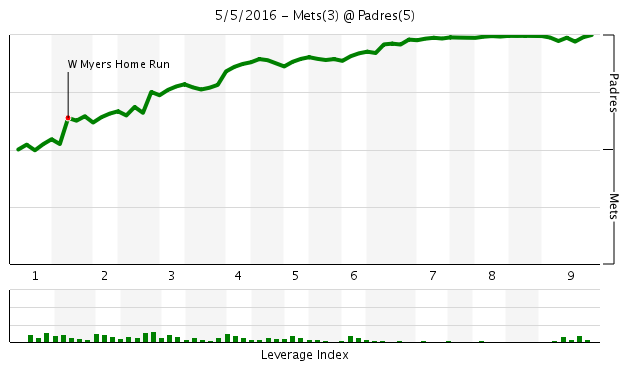