Mets vs. Nationals recap: Another day, another loss

The Mets lost to the Nationals in a game that ended late because of rain delays.

Share All sharing options for: Mets vs. Nationals recap: Another day, another loss

In a game that started an hour late and featured a second rain delay that was roughly an hour-and-a-half long, the Mets lost to the Nationals once again. The season is far from over, but over the past couple of games, the team has good job of convincing those who think that it is that they are right. 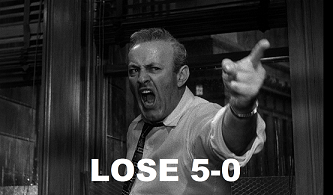 Matt Harvey and Lucas Giolito were the starters for this one, though both were knocked out of the game early by the long rain delay. Harvey wasn’t quite dominant, as he issued three walks and allowed a run in his three-and-two-thirds innings of work. But he was throwing as hard as he has any time this season, with a fastball that averaged north of 96 miles per hour, according to Brooks Baseball.

That run alone was enough for the Nationals to win the game. The Mets had just five hits in the affair, and only one—an Asdrubal Cabrera double—was an extra-base hit.

To top things off, the Mets’ bullpen allowed four runs. Jerry Blevins got out of a bases loaded jam to complete the bottom of the fourth coming out of the rain delay, but he gave up a two-run home run to the left-handed Bryce Harper in the fifth. And Hansel Robles, who was so good last week, gave up two runs in two innings after he took over for Blevins to start the sixth.

That leaves the Mets in a less-than-ideal spot: five games out of first place with Logan Verrett on the mound tonight against Max Scherzer in the series finale.