Having arrived in Florida fresh off a pair of disappointing losses to the Chicago White Sox and without their third baseman and captain, the Mets won their first game of the weekend against the Miami Marlins with relative ease. 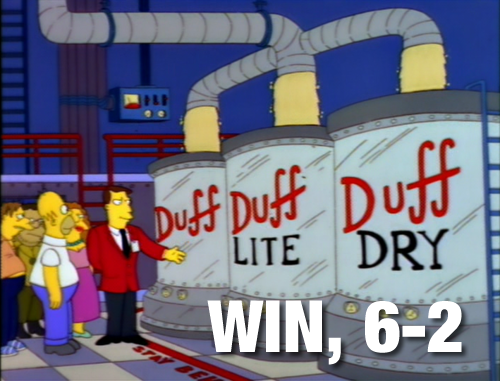 Although he wasn't quite as dominant as he can be, Noah Syndergaard was still very, very good in his eleventh start of the season. He gave up two runs in seven innings, struck out nine, and walked just one. And the Mets hit three home runs over the course of the game and won 6-2 in the end.

That a two-run, seven-inning start with nine strikeouts can reasonably be referred to as "not quite as dominant as usual" is a little absurd. Syndergaard came into the game with a 1.84 ERA and came out of it with a 1.91 ERA. He was hitting 98 and 99 regularly and topping out even higher than that, even late in his start. Here's the velocity graph from Brooks Baseball:

Syndergaard got swinging strikes with his four-seam fastball, changeup, slider, and curveball in the start. The slider was the standout in that regard, as he got eight of them on just twenty-two sliders. Again, this was Syndergaard not looking his best.

The Mets' offense was a big part of the game, too. After Syndergaard gave up a solo home run to Marcell Ozuna, who's had a fine season thus far, in the second inning, Asdrubal Cabrera tied the game with a solo home run of his own, a no-doubter to right field that tied the game in the fourth. Later in that inning, with Yoenis Cespedes on third base with two outs—following one of his two hits on the night—Wilmer Flores gave the Mets the lead with a broken-bat single.

Syndergaard allowed the Marlins to tie the game in the sixth, as Ozuna got him for a sacrifice fly. Things definitely could have been worse in that inning, as a ground ball that could have been a double play glanced off Asdrubal Cabrera's glove as he dove for it behind the bag at second base and slowly rolled into center field. As a result, Martin Prado advanced from first to third on the player, and the batter, Christian Yelich, wound up on second base and was credited with a double. That's when Syndergaard allowed the sac fly, but he followed that up by striking out Giancarlo Stanton to end the inning.

The Mets didn't waste much time in coming back, though. Marlins starter Tom Koehler walked Flores to begin the top of the seventh, and after delaying as much as possible to get Mike Dunn into the game, Don Mattingly made the pitching change to have them lefty face left-handed hitter James Loney. On the first pitch he saw, Loney hit a two-run home run off the face of the second deck in right field, and the Mets took a 4-2 lead.

In the seventh, Syndergaard worked around a bit of trouble but finished his night with his ninth strikeout, which ended that inning and left runners stranded on second and third base. And in the eighth, Addison Reed continued his fantastic season with three strikeouts and just a single allowed in a scoreless inning. He's down to a 1.82 ERA and 1.63 FIP on the season with the best strikeout and walk rates of his career.

Jeurys Familia started warming up for the ninth, but he wasn't needed in this game. Rene Rivera hit a two-run home run—the third former 2015 Tampa Bay Rays player to hit a home run for the Mets on the night—to make it 6-2 and really put the game out of reach. With that, Familia sat down, and Jim Henderson pitched a perfect ninth and got three outs on fly balls to end the game.

The Nationals lost, too, which means the Mets cut their deficit in the National League East to just 2.0 games.