The Nationals finished off the sweep in D.C. by a final score of 4-2. Hope springs eternal but this outcome was not totally unexpected. 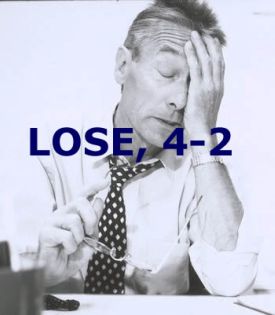 The night started off poorly when Curtis Granderson, who has decent numbers against Max Scherzer, had to be scratched from starting the game. This led to a shuffled lineup from Terry Collins, with the curious decision to have Alejandro De Aza battting in the leadoff position. Granderson’s scratch also allowed Brandon Nimmo to get the start when he was originally out of the lineup.

Scherzer proved he was human in the second when Asdrubal Cabrera bunted for a single and Kelly Johnson followed with a walk. Unfortunately for the Mets, Scherzer proceeded to squash that rally, and any hint of future rallies for over the next four innings. He got out of the jam in the second by getting back-to-back strikeouts of Nimmo and Rene Rivera.

He got on a roll after that, meeting little resistance from the Mets. He struck out at least one batter in every inning and after the Johnson walk, he retired 18 batters in a row. Brandon Nimmo finally ended the streak when he singled with one out in the eighth. That hit ended Scherzer’s night and old friend Oliver Perez entered.

Granderson felt well enough to pinch hit for Rivera and singled off Perez. Travis d’Arnaud was up next to pinch hit for the pitcher and Dusty Baker countered by bringing in reliever Blake Treinen. d’Arnaud grounded out but both runners were able to move into scoring position. Once again Baker went to his bullpen and brought in his current closer Shawn Kelley. That brought up current leadoff hitter Alejandro De Aza and he struck out to eliminate the opportunity to tie up the game.

It was only 2-0 at that point because Logan Verrett pitched alot better than his other recent starts. He was not dominant but limited the damage. Old friend and current nemesis Daniel Murphy tagged Verrett in the second with a solo home run. In the third, Danny Espinosa led off the inning with a double and later scored on a sacrifice fly by Jayson Werth. Verrett’s final line for the night was five innings, two runs, and one strikeout.

Collins turned to Antonio Bastardo who, like Verrett, has been less than stellar in his last few appearances. Today he would have been perfect in his two innings of work had it not been for an error by Kelly Johnson. He was able to work around it in the sixth and in the seventh he pitched a clean inning.

In the eighth, Collins turned to Sean Gilmartin. Daniel Murphy was due up, and like clockwork he belted his second home run of the game. This one was a two-run shot that gave the Nationals a 4-0 lead.

The Mets were dangerously close to being shut out for 24 straight innings, but James Loney finally put them on the board when he hit a two-run home run in the ninth. Kelley was able to finish off the inning without further damage and ensured that Murphy’s home run was the deciding factor in the game. 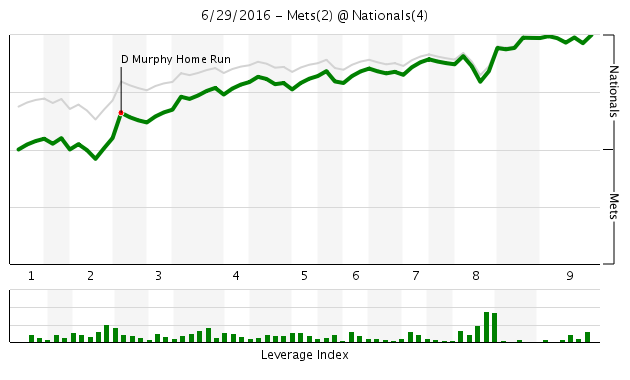