Mets vs. Pirates Recap: Mets come back three times to win in extras

A day after an embarrassing offensive showing, the Mets wouldn't go quietly.

Share All sharing options for: Mets vs. Pirates Recap: Mets come back three times to win in extras

On Wednesday night, for the first time in their last 10 tries, the Mets defeated the Pirates, 6-5 in extras. Their first victory over Pittsburgh since July 2014 wasn't the only rarity, either: 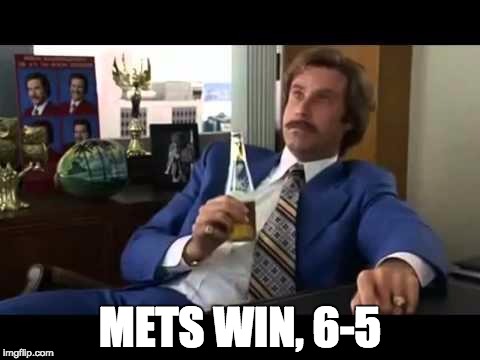 In the last of a three-game set, the Mets mounted three game-tying comebacks before a Wilmer Flores pinch-hit single gave New York their first and only lead of the series in the 10th inning.

Ty Kelly's two-run dinger in the fourth equaled the team's offensive output in their doubleheader a day earlier, knotting the game at two. An inning later, Michael Conforto tied the game up again on a sacrifice fly after Syndergaard doubled off the right field fence and advanced on a sacrifice bunt from Alejandro De Aza.

In the eighth, Conforto, who entered the game mired in a 4-for-39 slump, then launched a two-run home run off reliever Jared Hughes in the eighth after the Pirates had taken a 5-3 lead.

Despite the left fielder's dinger, the Mets squandered an opportunity to take a lead in the eighth. After a Yoenis Cespedes single and Walker walk, the pair reached second and third with no outs on a Hughes wild pitch. But a James Loney ground out to a drawn-in infield, an intentional walk to Asdrubal Cabrera, a shallow pop-up from Kelly, and a pinch-hit ground out by Curtis Granderson later, the threat came up empty.

In the 10th, Walker and Cespedes again reached second and third. And again the Pirates walked Cabrera to load the bases. With lefty Cory Luebke on the hill, Collins pinch-hit Flores for Kelly, and the utility infielder responded by fighting off an inside fastball to shallow center field to drive in the winning run.

Syndergaard battled through six innings, holding Pittsburgh to three runs (two earned) in six innings while striking out five and walking two without the aid of the usual late life on his fastball. His counterpart Taillon, who was drafted second overall in 2010, struck out three and allowed three earned runs in six innings.

Mets righty Jim Henderson gave up two runs on two hits and a walk in the seventh; he's now surrendered six earned runs in his last nine innings. Addison Reed earned the win by going two innings for just the ninth time in his career. He allowed just one hit and hasn't surrendered a run since April 30.

Though it wasn't easy thanks to a trio of walks, Familia nailed down the save in the bottom of the 10th due in large part to a 6-4-3 double play off the bat of Sean Rodriguez with runners at first and second with no one out. With Francisco Cervelli on third, Familia struck out David Freese to end it.