Share All sharing options for: Mets vs. Nationals recap: Murph’d

Having had a rough Friday night, the Mets didn’t do much to make things feel better on Saturday night at Citi Field. They gave up six runs, four of which were driven in by Daniel Murphy, and scored just one in their second loss in as many days to the rival Washington Nationals. 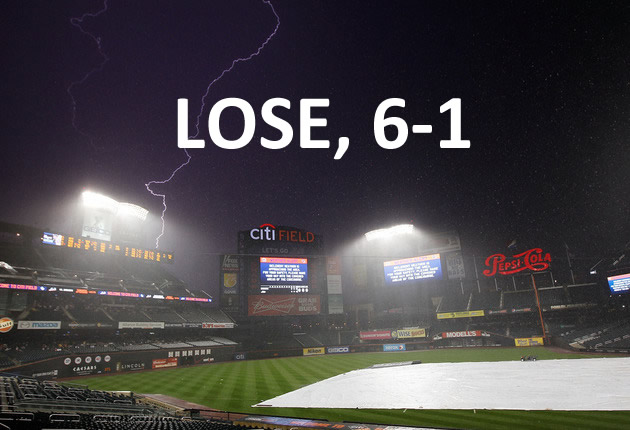 That leaves the Mets five games back in the division, though still one game up for the second Wild Card spot in the National League, heading into today’s series finale, the final game before the All-Star break. Considering the injuries the Mets have accumulated up to this point, that’s fairly impressive.

Believe it or not, the Mets led briefly in last night’s game. In the first inning, they threatened against Max Scherzer and scored one run on a sacrifice fly. But with runners on the corners and one out after that run had already scored, Scherzer struck out Asdrubal Cabrera and Brandon Nimmo to end the inning. Perhaps the game would have gone differently if the Mets had scored more than once in that inning.

The Nationals’ comeback didn’t take long against Verrett. They hit a sac fly of their own in the second, and after Verrett walked Scherzer to begin the third, they took the lead on a Ben Revere triple. That was the only run they would need to win, but Daniel Murphy drove in a run later in that inning with a single, one more on a double in the fifth, and two more after that on a home run in the seventh against Antonio Bastardo.

So it goes. The Mets will send Steven Matz out to try to defeat the Nationals today to end the first “half” of the season. If they can win, they will still have completed a strong home stand. Here’s hoping they’re at as full strength as they can possibly be when the season resumes at the end of this week.