The Mets won their first game after the All-Star break.

Coming out of the All-Star break, the Mets are more than a little dinged up. Luckily, they’ve drawn the Phillies as their first opponents to begin the second “half” of the season. 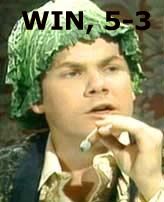 In the series opener last night, Juan Lagares got the scoring started with a solo home run to center field in the bottom of the third. That was his third home run of the year, and after going 1-for-2 with two walks and two runs scored, he’s hitting .268/.317/.420 on the season. Adjusting for park, that’s just above league average, but combined with good defense in center field, he’s looked much better this year than he did last year.

In the sixth, the Mets scored three more runs after Asdrubal Cabrera and Curtis Granderson—both of whom have been important to the Mets’ success this year—singled. That set up Neil Walker for a Citizens-Bank-Park-special home run to left field, and the Mets had a 4-0 lead.

Through five innings, Bartolo Colon had shut out the Phillies, but in the sixth, Philadelphia got a three-run rally started when James Loney made an error that allowed Odubel Herrera to reach first with one out in the inning. Peter Bourjos promptly tripled, scoring Herrera, and Maikel Franco grounded out to second to score Bourjos. Since that’s where the inning would have ended if it were the third out, none of the runs allowed by Colon were charged was earned runs.

He gave up one more, though, after allowing a single to Tommy Joseph, Cameron Rupp, and giving up a run-scoring single to Cody Asche that ended his night. So he gave up three runs in total, none of them earned, struck out four, walked two, and now has a 3.11 ERA on the season.

Hansel Robles took over from there and started what was another excellent night for the Mets’ bullpen. He induced a pop-up to end the Phillies’ threat in the sixth before the Mets tacked on an insurance run in the seventh. That one heavily involved Lagares, who walked, stole second, advanced to third when Alejandro De Aza flew out, and scored when Jose Reyes grounded to short with the Phillies’ infield in, just beating a throw to the plate and getting under the tag as he slid.

That insurance run certainly helped, but the Mets’ bullpen shut out the Phillies the rest of the way. Robles, Jerry Blevins, and Addison Reed each got one out in the bottom of the seventh, and Reed—who has been fantastic this year—threw a perfect eighth. And then Jeurys Familia threw a perfect ninth, looking dominant in the process as he struck out two of the three batters he faced.