Share All sharing options for: Mets vs. Rockies recap: Jeurys Familia and the Mets again implode

The Mets lost in the ninth inning for the second day in a row when Jeurys Familia again gave up two runs to contribute to a brutal 2-1 loss. This game was a collection of bad decisions, poor execution, and horrendous at-bats. 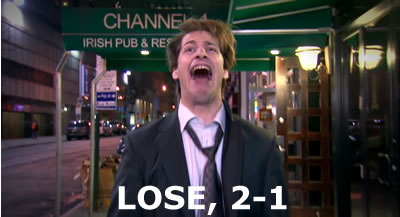 After the Mets’ loss on Wednesday night, manager Terry Collins said he would use Addison Reed to close on Thursday afternoon should the opportunity arise. By the time the game was over, not following through on that statement loomed large.

Before the game even started, the Mets were already in a hole when it was revealed Yoenis Cespedes is still dealing with a sore quad and might be out a couple of days. That left the Mets with a short bench since Jose Reyes was also unavailable.

Hope was on the hill, however, since Jacob deGrom got today’s start in the sunshine. When he pitches during the day, deGrom is 15-3 with a 1.63 ERA for his career. This year, he is 5-1 in day games, with a 2.33 ERA including that complete game one-hitter against the Phillies. He did have a woeful performance in his last start out against the Marlins, but there was no semblance of that on Thursday afternoon.

deGrom came out firing against the powerful Rockies lineup, when he struck out both DJ LeMahieu and Nolan Arenado to end the first inning. The Mets handed him the lead in the second, when Rene Rivera hit a double to drive in James Loney with two outs. Rivera attempted to go to third but was thrown out after the run had already scored.

deGrom made that one-run lead stand up in his seven innings of work. The top of the fourth was the only inning in which deGrom had to do some heavy lifting. With two outs, he allowed back-to-back hits to Trevor Story and David Dahl, but he got out of it when Daniel Descalso flew out to center.

His seventh inning was his quickest inning when he only needed eight pitches to get the bottom third of the lineup out. It looked like he was all set to pitch the eighth, but Terry Collins pinch hit for him when the Mets had the semblance of a rally going. So his day was done after he shut down the Rockies for seven innings. He struck out six and walked one.

Collins was forced to go all in that seventh inning since the Met offense was once again drying up in the 90 degree heat. In the fourth inning Neil Walker doubled and Asdrubal Cabrera reached base on a very rare infield ball hit to Arenado that he could not handle. They could not capitalize on Arenado’s mistake when James Loney flew out to end the inning.

Rene Rivera had a good day at the plate and led off the fifth with a double. He was left stranded when Alejandro de Aza struck out, deGrom grounded out, and Juan Lagares struck out. Minor quibble there, de Aza could have at least gotten Rivera over to third with one out, but instead he went for the useless strikeout.

In the sixth, the Mets once again had runners on against Rockies rookie starter Tyler Anderson when Arenado made another bad play in the field. Loney was again up next and again failed to bring the runners home, this time with a popup to first.

That brings us to the seventh inning where Terry Collins perhaps overmanaged the inning. Rivera and de Aza led off with back-to-back hits setting up second and third and nobody out. Collins then pinch hit for deGrom with Cespedes even though he admitted he knew they would intentionally walk him. Still, that set up bases loaded with nobody out. The next batter was Juan Lagares and since a righty came into the game, Collins pinch-hit for him with Kelly Johnson, even though Michael Conforto was available off the bench. Despite getting ahead in the count, Johnson grounded out weakly to short. The throw came home and now the bases were still loaded but with one out. Curtis Granderson was clueless at the plate today and it showed when he struck out in that critical situation. He finished the day 0-4 with three strikeouts.

That left it up to Wilmer Flores who could not come up with the big hit either. No cheers for Wilmer today, instead he ended the inning among boos when he popped up to center.

In the eighth, a combination of Addison Reed and Jerry Blevins kept the Rockies off the board, and that meant Jeurys Familia would get closing duties in the ninth.

It was once again apparent that he did not have it right from the start. He got to 3-0 on Story, who eventually singled to start the inning. He stole second and Familia’s control issues continued when he walked Dahl. That brought up Descalso who was called upon to bunt. In the Cubs game it was Jose Reyes who made a bad decision to set up bases loaded for Familia. This time it was Rivera who did not field the bunt since he assumed it would roll foul. It stayed fair and once again the bases were loaded with nobody out.

Familia was a Houdini against the Cubs, but today he ran out of magic. He struck out Tony Wolters and induced a ground ball from pinch hitter Cristhian Adames, but James Loney booted the ball and everyone was safe as the tying run came home. Up next was Charlie Blackmon and Familia uncorked a wild pitch during that at-bat to bring in the go-ahead run. They proceeded to intentionally walk Blackmon to load up the bases again, but that mess would be for Hansel Robles to deal with. Familia’s day was done after blowing his second straight game. Robles successfully stopped the bleeding but it was too late.

Would the outcome of this game been different had Collins gone with Robles and Reed in the eighth and ninth? That is what hindsight it for but what we do know is that Familia talked Collins into using him today and Collins obliged. While the players must love Collins since he shows he believes in them and tends to back them even if they have a tough day, he might have been better served today if he just said no. Today Met fans had ordered a Jeurys Familia but got an Armando Benitez instead.