Suffice it to say it wasn’t a great day to be a Mets fan.

The Mets lost to the Rockies 6-1 in another dreary showing for the Mets offense. Steven Matz got off to a rough start, as Carlos Gonzalez knocked in DJ LeMahieu with an RBI double before Matz escaped the jam. The bottom of the first started off well, as Curtis Granderson worked a walk against historically wild right-hander Tyler Chatwood. Unfortunately, Travis d’Arnaud grounded into a double play on the very next pitch to quickly end the Mets threat.

The Mets tied the game at 1-1 in the second inning when James Loney hit a solo home run over Carlos Gonzalez’s glove and into the Colorado bullpen. Steven Matz found himself with runners in scoring position in the third, fourth, and fifth innings. Each time the young left-hander worked his way out of the jam, doing so by way of the strikeout in the third and fourth.

Matz’s Houdini act ran out of charm in the sixth inning, when he allowed an RBI double to noted Mets-killer Nick Hundley (career .352/.406/.534 hitter against the Mets). Matz worked his way out of the sixth to earn the quality start and the loss. The Mets’ offense was largely dormant after Loney’s home run, managing only three hits against Chatwood.

Erik Goeddel worked a clean seventh inning, before allowing an insurance run to the Rockies in the top of the eighth. In the bottom of the eighth, the Mets appeared to start a rally. Alejandro De Aza and Curtis Granderson both singled against Colorado lefty Jake McGee. Walt Weiss, the Rockies’ skipper, pulled McGee in favor of Scott Oberg, who needed only three pitches to retire Travis d’Arnaud, Yoenis Cespedes, and Loney.

Antonio Bastardo allowed two baserunners in the top of the ninth, followed by a three-run home run by Carlos Gonzalez to seal the deal. Neil Walker reached base on a single in the bottom of the inning before Wilmer Flores, Asdrubal Cabrera, and Michael Conforto went down in order.

The Mets will look to salvage the series with the Rockies today, as Bartolo Colon faces Jorge De La Rosa on three days’ rest. 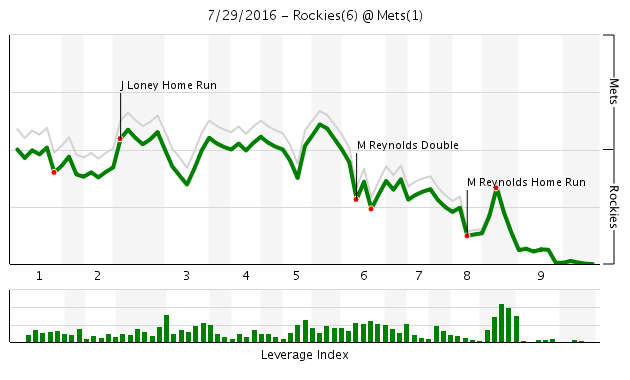