The Mets routed the Cubs again to complete a four-game sweep.

Share All sharing options for: Mets vs. Cubs recap: Sweep!

The Mets completed a four-game sweep of the Cubs yesterday afternoon at Citi Field, and it couldn’t have been an easier win. The team scored 14 runs on 22 hits despite facing Jon Lester, who came into the game with a 2.03 ERA and left it with a 2.67 ERA. If that sort of thing sounds familiar, the Mets did it to Cubs starter Jason Hammel on Friday night, too. 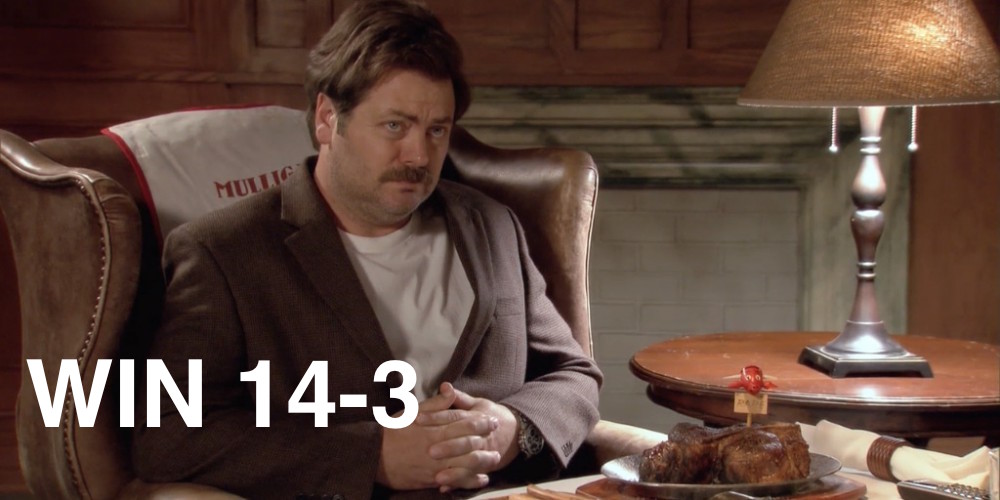 Believe it or not, the Mets trailed briefly in the game. Noah Syndergaard was excellent, but he gave up one run in the top of the first before the Mets started their barrage against Lester. Curtis Granderson, hitting second in the lineup in his first at-bat since missing a few days with a calf injury, tied the game at one with a solo home run. That was it for the Mets’ offense in the first, but things opened up and got incredibly fun in the second inning.

Wilmer Flores led off with a solo home run. After Lester got James Loney to strike out looking—on a borderline pitch—Matt Reynolds doubled and Rene Rivera hit a home run. Lester walked Syndergaard, and Juan Lagares doubled. With runners on second and third, Granderson singled to score Syndergaard. Yoenis Cespedes followed up with a single to score Lagares. If your head is spinning a bit, that’s okay. Lester’s was, too.

Lester threw a wild pitch to put runners on second and third again. Neil Walker singled, and Granderson scored. Wilmer Flores singled, too, and Cespedes scored. And Joe Maddon finally took Lester out of the game after eight runs had scored in just one-and-one-third innings.

Cubs reliever Spencer Patton took over from there and walked Loney to load the bases, but he was able to escape that jam, as Reynolds fouled out and Rivera struck out to end the otherwise outstanding inning for the Mets.

Syndergaard went into cruise control, and the Mets were not done scoring. Rivera singled in a run in the fourth to make it 9-1. In the fifth, it looked for a second like the Mets might have their first inning without a baserunner, as Granderson and Cespedes struck out to begin the inning. But it didn’t take long for Neil Walker to reach on an infield single and for Flores to hit his second home run of the game and make it 11-1.

In the seventh, Terry Collins started working in players from his bench, and the Mets still scored more. Brandon Nimmo hit for Cespedes and was hit by a pitch. Kelly Johnson hit for Walker and hit a two-run home run to left field to make it 13-1. Joel Peralta, who had started that inning, was replaced on the mound by catcher Miguel Montero.

And in the eighth, with Montero still on the mound, Jacob deGrom appeared as a pinch hitter for the very, very rare postion-player-pitching vs. pitcher-pinch-hitting combination. And while deGrom was retired by Montero, the Mets managed to score another run on a James Loney single.

Syndergaard wound up pitching seven innings with eight strikeouts, no walks, and just that one run allowed way back in the first inning. He also doubled to deep right field in the sixth inning, his first hit of the game after he smoked a line drive out earlier in it.

Antonio Bastardo threw a scoreless eighth in relief of him, and Logan Verrett gave up two runs as he had to work hard to complete the ninth.

And last but certainly not least, Wilmer Flores went 6-for-6 on the day, joining Edgardo Alfonzo as the only Mets to have ever done that in a game.

Can the Mets play the Cubs for the rest of the season?